Meet your teacher: Cooking for community

Upper school mathematics teacher shares desserts and kindness with others 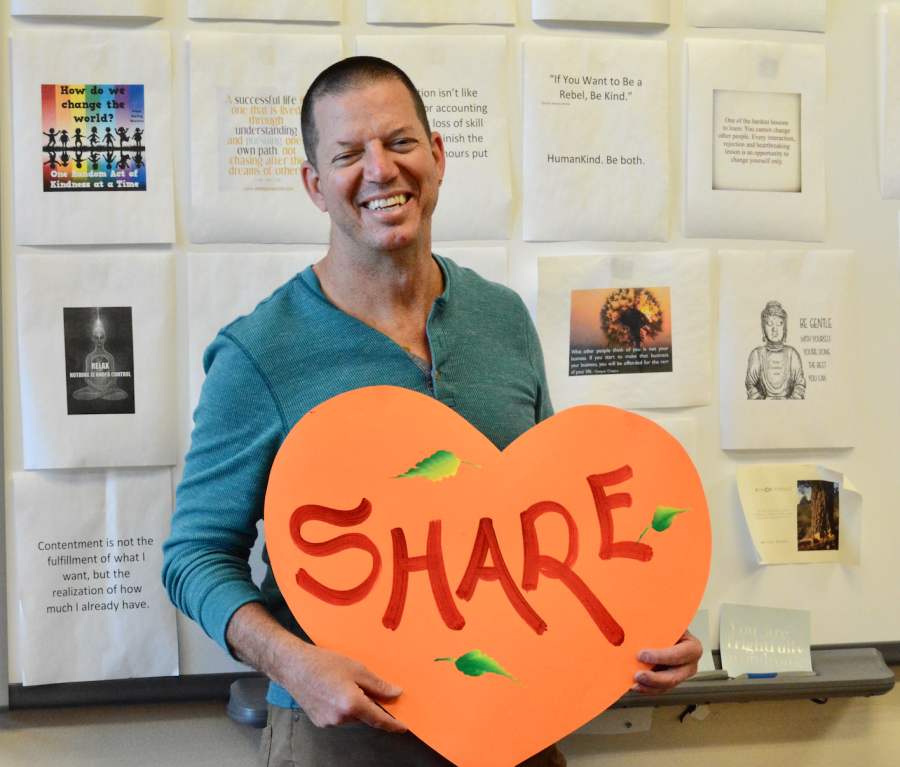 Upper school mathematics teacher Bradley Stoll holds a heart shaped paper cut-out with the word "share" painted over it. Ever since becoming vegan in 2014, Stoll has discovered new ways of cooking and sharing his baked goods with others.

Advanced Placement (AP) Calculus BC and vegan desserts may appear an unlikely combination, but upper school mathematics teacher Bradley Stoll combines the two effortlessly. Walking into Dobbins 102 on a lucky day, what draws your attention immediately might not be the myriad of motivational posters — more than a few integrating math puns — bedecking the walls, but instead the warm, inviting smell of freshly baked brownies. This setting, a safe and welcoming environment, emulates Stoll’s compassion for others around him, extending not just to humans but also animals.

Stoll’s journey to both environmental consciousness and gift economy, a culture where acts of kindness are freely given without any expectation of reciprocation, began in 2013 when he started attending gatherings at the volunteer-run organization ServiceSpace.

“In 2013, a former student of mine came and told me about this thing I should go to,” Stoll said. “Most of the people there were vegetarians, and I enjoyed being there so much, [I decided]: ‘I need to be vegetarian. I’ll quit eating meat, it’s not that big of a deal.’ And that was more to respect the lives of animals.”

Stoll recalls attending ServiceSpace one Wednesday night at the usual gathering location, the organization’s founders’ house, where he saw their son meticulously trapping mosquitoes one by one in a jar instead of swatting them. His actions helped Stoll come to the realization that human life is not any more important than an animal’s.

“There could be 10 [mosquitoes], and he would trap them one at a time and bring them outside, just because he had such respect for life,” Stoll said. “After that, I said, ‘Yeah, why is my life any more important than that mosquito’s life in the big picture?’”

Stoll began to educate himself about the dairy industry and the treatment of animals in the food industry. He further questioned animals’ purpose: were animals put on this Earth just for humans’ usage? Looking outside his window, Stoll pointed to the squirrel on the tree as an example.

“A lot of people respect human life, but then they’ll eat beef, and that’s fine,” Stoll said. “But I don’t think that’s respecting the animal’s life and I personally don’t feel that my life is any more important than anyone else’s or anything else’s. Look [at] the squirrel out there. I’m sure the squirrel is just as important [to] its family, so why should I be killing him?”

The next step in his journey was switching his eating habits. For this, he turned to the internet: a few quick searches on Google led him to some of his current favorite recipes, all free of animal products. According to Stoll, these recipes exposed him to a variety of new plant-based ingredients that he enjoys cooking with and eating.

“I found a couple of great websites [for vegan recipes] that have some of the most amazing food,” he said. “I hesitate to say it’s a healthier diet, but I have started to love eating things like mushrooms which I used to not like. I also never really ate much tofu, and now I like it.”

Five years ago, Stoll started bringing vegan desserts to his classes on his students’ birthdays after trying out new recipes. The pandemic interrupted his tradition, but when the community returned, he continued to bond with students like fellow vegan Amiya Chokhawala (11) over their love for baking.

After trying Amiya’s brownies, Stoll attempted to recreate them, bringing the finished product of vegan chocolate goodness to his students. Yet, despite following the same recipe, he came to the following conclusion: food shared by other people always tastes better.

“I have noticed that there’s a psychological thing,” Stoll said. “When other people make things and offer it, it always tastes better and [has] their love in it. It doesn’t matter [what it is]. It really is better, like those brownies. Amiya made these initially and brought me one and it was so good.”

“[Stoll and I] were trying to figure out a way to provide vegan options more consistently, and we always have a good time talking and bouncing ideas off of each other,” Albers said. “My favorite dessert was his vegan banana bread, I thought that was a really good one.”

Upper school chemistry teacher Andrew Irvine also appreciated Stoll’s emphasis on the value of learning instead of physical grades. The two first met in 2007, when Irvine used to teach in Dobbins, but later bonded through their shared belief of the importance of self-validation rather than receiving validation from external factors.

“I think he and I connected on our existential worldview that there’s more to life than grades and money and external achievement, perhaps without getting into the world of religious thought,” Irvine said. “I think we’re both spiritually existential. I would agree that we try to impart that students should measure their self-value independent of [academic] performance.”

Despite his adamant beliefs in caring for the environment, Stoll recognized his privilege in living in the Bay Area, where accessibility to environmentally beneficial food products is significantly higher than most of the world.

“I sometimes feel that a vegan diet is for the privileged,” Stoll said. “Some people are vegan [but] not by choice. Other people would love to be vegan but can’t be because of where they live. It is really [that] you have to live in the right place to follow a healthy diet, so I understand I have that privilege.”

Along with baking, Stoll demonstrates his love for the Harker community in a variety of ways such as improving the campus environment and offering extra support to his students.

“Mr. Stoll is a very caring person,” Amiya said. “You can tell he cares about every single student and the environment. I always see him picking up trash [and] talking to everyone a lot. He really cares about your learning.”