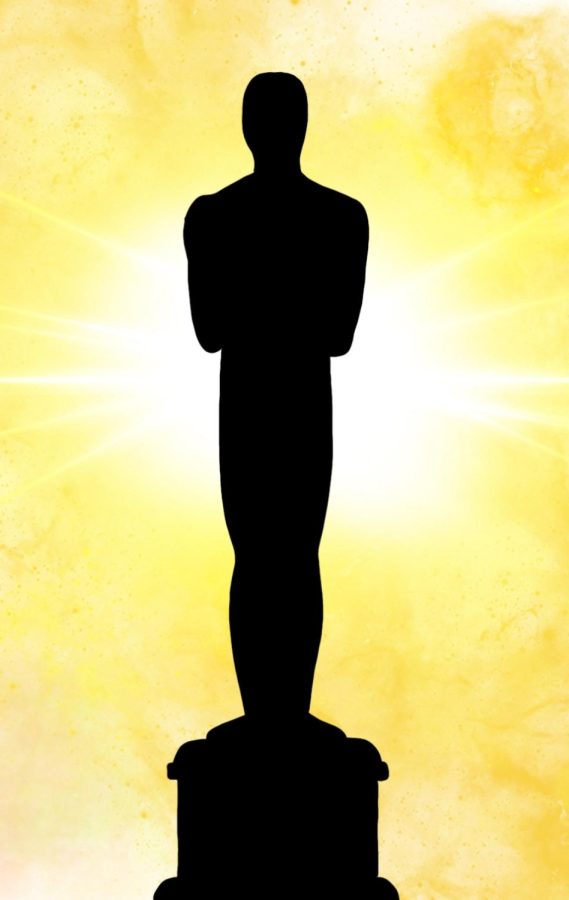 An illustration of an Oscar. The 94th Academy Awards will take place on March 27, honoring films released in 2021.

Today, the nation’s largest, most prestigious film award show approaches: the Oscars in the 94th Academy Awards. Taking place in the Dolby Theatre at the Hollywood & Highland Center, the Oscars will honor films released in 2021 in a total of 23 categories, from the coveted Best Picture to Music (Original Score) and Visual Effects.

Leading this year’s nominations are the western film “The Power of the Dog” with nominations in  12 categories, followed by films including “Dune,” “Belfast” and “West Side Story.”

Tune in to the 94th Academy Awards, hosted by Wanda Sykes, Amy Schumer and Regina Hall on Sunday at 5 p.m. and hear what predictions the Arts & Entertainment Editors Sally Zhu (11) and Alena Suleiman (10) have and read which film four other upper school students hope will win an Oscar, along with their reasonings, below.

Find the full list of Oscars nominees and categories below.

Actor in a Leading Role

Javier Bardem in “Being the Ricardos”

Benedict Cumberbatch in “The Power of the Dog”

Will Smith in “King Richard”

Denzel Washington in “The Tragedy of Macbeth”

Actor in a Supporting Role

Jesse Plemons in “The Power of the Dog”

J.K. Simmons in “Being the Ricardos”

Kodi Smit-Mcphee in “The Power of the Dog”

Actress In A Leading Role

Jessica Chastain in “The Eyes of Tammy Faye”

Olivia Colman in “The Lost Daughter”

Nicole Kidman in “Being the Ricardos”

Actress In A Supporting Role

Jessie Buckley in “The Lost Daughter”

Ariana Debose in “West Side Story”

Kirsten Dunst in “The Power of the Dog”

“The Mitchells vs. The Machines” from Mike Rianda, Phil Lord, Christopher Miller and Kurt Albrecht

“The Power Of The Dog,” cinematography by Ari Wegner

“The Tragedy Of Macbeth,” cinematography by Bruno Delbonnel

“The Power of the Dog,” directed by Jane Campion

“Attica” from Stanley Nelson and Traci A. Curry

“Summer Of Soul (…Or, When The Revolution Could Not Be Televised)” from Ahmir “Questlove” Thompson, Joseph Patel, Robert Fyvolent and David Dinerstein

“Writing With Fire” from Rintu Thomas and Sushmit Ghosh

“Lead Me Home” from Pedro Kos and Jon Shenk

“The Queen Of Basketball” from Ben Proudfoot

“Three Songs For Benazir” from Elizabeth Mirzaei and Gulistan Mirzaei

“When We Were Bullies” from Jay Rosenblatt

“The Power of the Dog,” edited by Peter Sciberras

“Drive My Car,” from Japan

“The Hand Of God,” from Italy

“Lunana: A Yak In The Classroom,” from Bhutan

“The Worst Person In The World,” from Norway

“The Eyes of Tammy Faye,” makeup and hairstyling by Linda Dowds, Stephanie Ingram and Justin Raleigh

“Don’t Look Up,” with music from Nicholas Britell

“Dune,” with music from Hans Zimmer

“Encanto,” with music from Germaine Franco

“The Power of the Dog,” with music from Jonny Greenwood

“Be Alive,” from “King Richard;” Music and Lyric by Dixson and Beyoncé Knowles-Carter

“Dos Oruguitas,” from “Encanto;” Music and Lyric by Lin-Manuel Miranda

“Down to Joy,” from “Belfast;” Music and Lyric by Van Morrison

“No Time to Die,” from “No Time To Die;” Music and Lyric by Billie Eilish and Finneas O’connell

“Somehow You Do,” from “Four Good Days;” Music and Lyric by Diane Warren

“Don’t Look Up,” produced by Adam Mckay and Kevin Messick

“The Power of the Dog,” production design by Grant Major; set decoration by Amber Richards

“Affairs Of The Art,” from Joanna Quinn and Les Mills

“The Windshield Wiper,” from Alberto Mielgo and Leo Sanchez

“Ala Kachuu – Take and Run,” from Maria Brendle and Nadine Lüchinger

“The Long Goodbye,” from Aneil Karia and Riz Ahmed

“On My Mind,” from Martin Strange-Hansen and Kim Magnusson

“The Power of the Dog,” with sound from Richard Flynn, Robert Mackenzie and Tara Webb

“Shang-Chi and the Legend of the Ten Rings,” with visual effects from Christopher Townsend, Joe Farrell, Sean Noel Walker and Dan Oliver

“CODA,” with screenplay by Siân Heder

“Drive My Car,” with screenplay by Ryusuke Hamaguchi and Takamasa Oe

“The Power of the Dog,” written by Jane Campion

“The Worst Person in the World,” written by Eskil Vogt, Joachim Trier