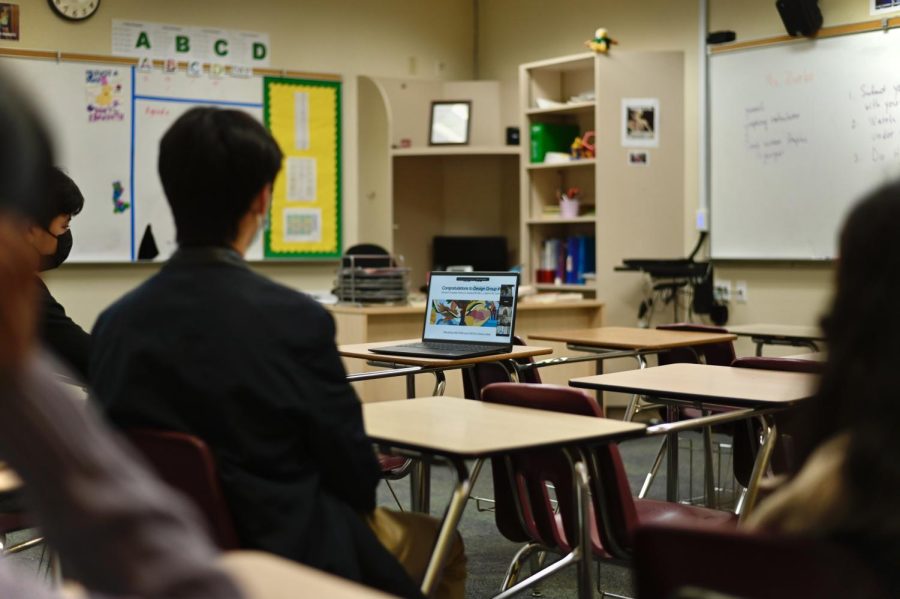 Spencer began with an update on the Ukraine Task Force Fundraiser initiative, announcing that the upper school community had raised over a thousand dollars for the U.N. Refugee Agency (UNHCR). He then opened the floor to clubs partnering with the ASB to give their own updates.

Lucy Ge (12) and Anishka Raina (12) from Key Club announced the club’s annual schoolwide fundraiser event, dubbed “Lollapacowza” this year, which took place in the Quad during long lunch last Friday. The main event consisted of the “Kiss a Cow” raffle, in which students nominated faculty members to kiss a miniature cow. The faculty members nominated included upper school English teacher Charles Shuttleworth, who won the raffle and kissed the cow, upper school English teacher Nikolai Slivka, upper school Mandarin teacher Dr. Shaun Jahshan and college counselor Martin Walsh. The club hosted a variety of other activities including entry to a petting zoo for a small donation, a baked goods sale and an arm painting and temporary tattoos station run by Art Club, all accompanied by music and a bubble machine.

Adi Jain (10) and Kabir Ramzan (10) from the Aerospace Club announced a wooden plane competition fundraiser that took place on Davis Field at 3 p.m. last Friday. The club sold $5 wooden model planes for students to put together and paint with the Ukrainian flag as well as other designs. The students who threw the plane farthest or had the most elaborate design won a free admission to the Hiller Aviation museum and a plastic diecast model airplane. Juniors Robert Zhang and BB Ajlouny tied for first place for the farthest plane thrown, and Anika Mantripagada (10) won in the design category.

Andrea Thia (12) from Multicultural Club and Brooklyn Cicero (12) from the Student Diversity Coalition (SDC) encouraged students to dress in yellow and blue, the colors of the Ukrainian flag, on March 23 to show support for the country. The date to wear yellow and blue has been changed to today.

“As we speak, lives are endangered and people lose hope,” Andrea said. “But we’ve seen that it’s the little things that can make a difference and bring together a community in the midst of such uncertainty.”

Cady Chen (12) then announced a joint fundraising effort on behalf of Medical Club and Research Club that took place this Tuesday. During long lunch, the clubs sold packages in front of Manzanita Hall containing handmade Ukrainian-themed bracelets and sunflower seeds for $8 each as well as handmade crocheted Ukraine plushies for $12.

Art Club officer Michelle Liu (12) announced that the club will sell Ukraine-themed stickers and enamel pins next week to help raise money for the Ukraine Task Force Initiative. The designs were created by Art Club members and feature Ukrainian motifs such as the sunflower and nightingale.

Spencer rounded off the update by reminding students that none of the fundraising efforts will use Harker Pay.

Next, Michelle returned along with Kris Estrada (11) and Rupert Chen (11) from the ASB Community Events Committee and Alex Lan (11) from the Community Service Committee to announce the winning design for the Quad Mural Design Contest, “Soaring Spirit in Color.” Created by juniors Sonya He, Avery Olson, Ally Lee, Lakshmi Mulgund, Carlo Banzon and freshman Jessica Wang with help from other club members, the design received 40% of the 363 first choice votes.

Art Club collaborated with the Community Events Committee to co-host the Spirit painting kickoff after school last Friday from 3:30 to 5:30 p.m in the Quad with pizza, snacks and music. They encouraged students to stop by and help, even those without painting experience. There was another painting session held this week, and students can sign up on the spreadsheet.

“ASB will also be distributing stickers of the mural design next week to all painters as a token of our appreciation for your contribution to this wall that will hopefully serve as a place of community gathering and become a symbol of Harker’s collective identity for years to come,” Alex said.

Winged Post editors-in-chief Michelle and Emily Tan (12) and managing editor Mark Hu (12) announced Issue 5 of the Winged Post,which the journalism staff distributed on Wednesday. They reminded students to email [email protected] for any questions, comments or opinions and to follow Harker Aquila’s Instagram account for updates.

BB congratulated the boys varsity baseball team on their 11-0 victory against Del Mar High School on March 15, recognizing seniors Mark, Aaron Lo and Bobby Wang as well as junior Nick Delfino for their exceptional performance carrying the team to a win. The team is now 2-5 on the season and opened the Peninsula Athletic League play with a 16-0 victory against Half Moon Bay High School Tuesday.

Varsity boys tennis defeated Sacred Heart Preparatory School and King’s Academy with 4-3 and 6-1 wins, respectively. The team is 8-2 and will play their next game at Menlo School on March 28.

Varsity boys golf fell to Valley Christian on March 14 but rebounded with a win against Nueva on Friday. The team is 3 in 2 overall.

Varsity girls lacrosse lost against Castilleja on March 16. They will play against Mercy High School this Friday.

Lastly, Zain announced that the varsity track and field team competed at the Dublin Distance Fiesta at Dublin High School on March 18 and March 19.

Senior Conservatory members Nikki Kappadia, Richie Amarillas and Malar Bala gave updates on the upcoming Spring Musical and orchestra events. Malar began with an announcement on the orchestra’s weeklong trip to Hawaii, which they left for last Sunday, which includes competing in the Pacific Basin Music Festival in Honolulu.

Next, Richie announced this year’s production of “The Drowsy Chaperone,” with performances today, Friday and Saturday at 7 p.m. as well as a Saturday matinee performance at 2 p.m. He encouraged everyone to watch the musical-within-a-comedy featuring tap dancing, outrageous characters and 1920s glamor. Audience members could buy tickets online with $8 student tickets and $15 for adults. Students and faculty can also buy tickets in-person near Manzanita during lunch.

“We all know that you have busy and exciting lives, so it means a lot for you to all come out to the first onstage musical at the Harker Upper School for the first time in three years,” Richie said.

SDC co-leaders Brooklyn and KJ Williams (11) thanked everyone who participated in Culture Week, which took place in the first week of March. They then congratulated Chloe Wilson (9) and Ayla Apsey (11) on winning the Cultural Events Raffle.

Additionally, Brooklyn and KJ shared key information on the upcoming SDC elections for current freshmen and sophomores. The SDC is composed of two seniors, two juniors and one sophomore. The SDC agreement form was due Tuesday and the candidacy form is due today. Lastly, candidates will present their speeches at their freshman and sophomore class meetings on March 31 and March 29, respectively. More information can be found here.

Next, Mir Bahri (11) and Kabir from Ethics and Technology Forum introduced ETcon, a conference where students discuss the ethical implications of future technology. This year’s ETcon focuses on genetically modified organisms and includes outside speakers, casual discussions, snacks and a debate between upper school biology teacher Mike Pistacchi and Dr. Matthew Harley in addition to former upper school biology teacher Kate Schafer. The conference will take place on April 1 from 3 p.m. to 5 p.m. in Dr. Harley’s room.

Spencer returned to announce the upcoming ASB elections with the positions including President, Vice President, Treasurer, Secretary and Spirit Coordinator. Students interested in running for any positions can pick up a form by Upper School Dean of Students Kevin Williamson’s office any time this week.

Finally, Spencer closed the meeting by announcing that in-person school meetings will resume today in the Athletic Center and wishing everyone a wonderful day.