Humans of Harker: Challenges for the mind, expeditions in the outdoors 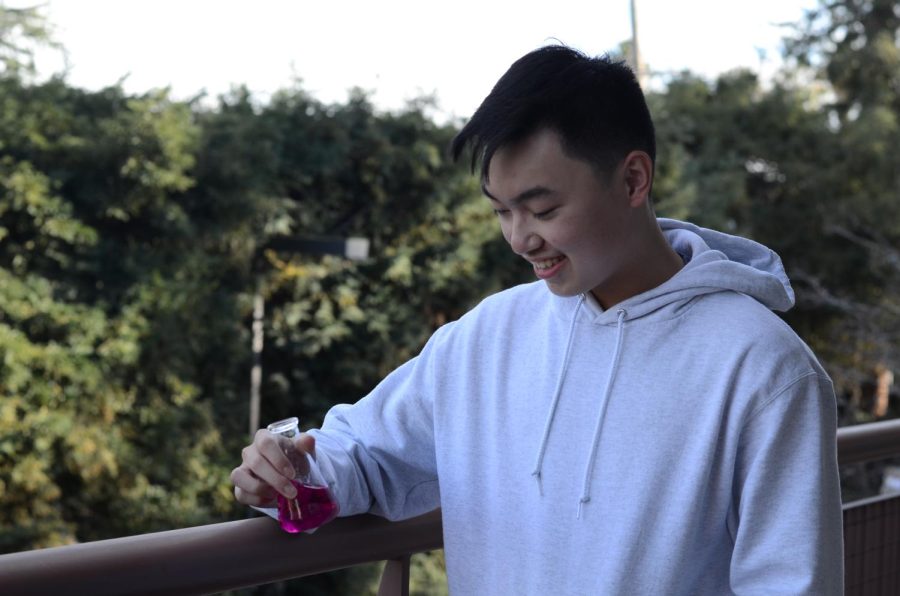 “School is kind of procedural — everything has a set schedule. But when you’re hiking, backpacking, you can do what you want to do, and use your own skills or knowledge to make that happen," Alex Zhang (12) said.

Alex Zhang (12) smiles as he recalls the semester-long Study of Organic Chemistry course he had taken the previous semester, especially the rewarding experience of translating lecture notes into hands-on labs and experiments. Laughing, he remembers one such lab, when he had been working with test tube holders and accidently set one on fire. Memorable classes aside, Organic Chemistry had been Alex’s favorite course because of its intellectually challenging material and relation to his main interests in STEM — biomedical and chemical engineering.

Alex’s passion for STEM began as an interest in medicine when he broke his foot in fourth grade and was researching different rehabilitation methods while recovering. Since then, he has taken on opportunities to learn more about and engage with different aspects of medicine.

Alex joined the Medical Club as a freshman to gain more exposure about medicine and has been an avid member since, currently presiding as the club’s public outreach officer. He finds the club’s interactive events most engaging, particularly the dissection event, where members are guided through animal dissections, and the diagnosis event.

“The more interesting aspect of it is the [hands-on events regarding what] you actually do as a doctor, that’s what makes it fun,” Alex said. “My personal favorite is the diagnosis [event], where we, as officers, pretend to be patients, and then our club members have this big list of injuries [and] illnesses, and then they try to diagnose us as fast as possible.”

Through Alex’s expanded knowledge of different areas of medicine, fields straddling biomedical and chemical engineering greatly interested him and led him to pursue research on nerve pain killing drugs, where he studied different types of painkillers and their effects on patients.

“All these different types of painkillers achieved the same end goal, but it’s cool to see how they all achieved that goal differently, through different mechanisms,” Alex said. “What was especially interesting was seeing how different drugs had different side effects and how putting different combinations together was more beneficial to treat a specific type of pain.”

Alex’s passion for tackling the tough problems his interests in STEM present have not gone unnoticed by those around him.

“When [I] think of someone who’s genuinely excited and interested in learning, I think of Alex,” close friend Harrison Chang (12) said. “A lot of people do these research opportunities for college, but when he [works with] STEM he’s genuinely interested and gets excited about it, and that’s a quality that speaks to his passions.”

Alex took the Study of Organic Chemistry course in his twelfth grade fall semester, which soon became his favorite class.

“You learn all of these mechanisms of how different chemicals interact and that’s how you build up your toolbox and understanding of organic chemistry,” Alex said. “Then you use that toolbox to create whatever you want from base materials. Basically, it’s like building Legos, but with molecules, and you make up how you want to do it.”

“[Alex] has a stellar mind, he’s super bright, and he likes anything that is meaty enough that he can sink his teeth into,” Dr. Brown said. “He’s such a talented kid that if we as teachers taught to that level, we would scare everyone off and make everyone’s life miserable. And I’m not being hyperbolic there.”

While Alex aspires to, in the future, design medical solutions for more effectively treating and preventing injuries and illnesses, the organic chemistry course furthered his interest particularly in chemical engineering.

“He’s very good at exploring different options,” close friend Cindy Su (12) said. “He’s super open, and he’s skilled enough to pick up new things quickly. I remember he told me he wanted to major in chemical engineering, and I was like, ‘Wow, that’s pretty different from what I thought …’ He said it’s a good skill to have, something that really interests him. It’s admirable that he’s willing to try something new to him.”

Alex’s love of intellectually stimulating material for his mind finds parallels with his appreciation for physical exertion in the outdoors. A member of Boy Scouts of America since sixth grade, Alex is now an Eagle Scout, the highest scout rank in the program.

“[I’m proud of] deciding to stay in Boy Scouts, because at first I didn’t really want to go,” Alex said. “At the start I was like, ‘What’s the point of this? This feels like the army, all these rules and everything.’ But it’s actually pretty flexible once you get in — you can raise your own ideas, do what you want … It’s probably some of the most fun I’ve had.”

Alex’s highlights from Boy Scouts have always been the campouts and outdoor activities. His favorite experiences are from the summer of 2019, when he went backpacking in New Mexico with friends from Boy Scouts for two weeks.

“We covered 80 miles in two weeks,” Alex said. “We got to fish, we got to rock climb, we got to go mountain biking, all of that … All this outdoor-sy stuff is a very different experience than what most of our lives are like here at Harker.”

Boy Scouts are primarily high schooler-scout led, with older scouts rotating through six-month long leadership responsibilities. As an older scout experienced with many of the leadership duties, Alex particularly enjoyed the responsibility of planning campouts for his troop, where he’s responsible for all the logistics of the campout, including contacting the necessary companies, sending out a sign up sheet for the scouts and working out an itinerary for the trip.

“You want to make sure that the experience is the best for everybody involved, so it’s like most things you do in engineering as well — drafting a proposal and then getting feedback, seeing what people want, and then tailoring the plan to make it better for everyone,” Alex said.

Alex has also taken on the role of an instructor to the younger scouts, where he teaches them survival skills he himself had been taught in his early years as a scout, including how to tie knots, what to do when lost in the wilderness and first aid practices.

“It’s nice because one thing, it’s giving back to [my] troop for everything they taught me,” Alex said. “And then it’s really nice … when at campouts you’re actually seeing [the younger scouts] do the things that you teach them. It’s a nice way for me to brush up on my own skills as well.”

“School is kind of procedural — everything has a set schedule,” Alex said. “But when you’re hiking, backpacking, you can do what you want to do, and use your own skills or knowledge to make that happen.”

Alex especially values the time Boy Scouts offers him to immerse himself in the natural environment outdoors. Despite having to graduate the program once he turns 18, he hopes to stay in the loop and attend a few events as an adult when possible.

“[Boy Scouts] opened me up to a whole new realm of things,” Alex said. “When most people think of relaxing or having fun, it’s watching TV shows or playing video games. I definitely do do that [sometimes], but being in the outdoors, being in nature, that’s also a really big part of life.”