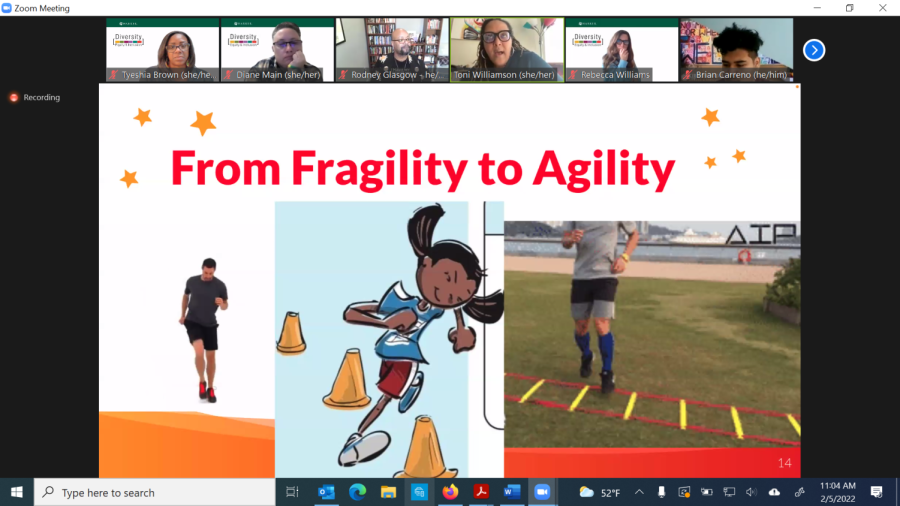 Nationally-recognized diversity practitioner and consultant and adult session speaker Toni Graves Williamson presents on turning fragility into agility through steps such as self-reflection and being willing to listen to others. More than 50 people attended this year's Student Diversity Leadership Gathering, and attendees from the Harker community were joined by students and teachers from other schools such as Menlo High School and the Kirby School in Santa Cruz.

by Julie Shi and Isha Moorjani

Warning: The following story contains an image with headlines mentioning violence and suicide and may be upsetting to some readers.

Student, teacher and faculty attendees begin piling into the Zoom room at the start of the virtual fourth annual Student Diversity Leadership Gathering (SDLG). Mics off and videos on, attendees fill the screen, ready to engage with and discuss the topics of this year’s gathering.

Facilitated by the Harker School’s SDC advisors and members each year, the SDLG, a local version of the National Association of Independent Schools (NAIS) Student Diversity Leadership Conference (SDLC), invites students, faculty and staff from schools in California to attend speaker events and participate in activities exploring diversity and social activism.

This year’s gathering, centered on the topic of cultural competency, began with speaker events in the main Zoom room, after which adults and students split into separate rooms for discussions and activities. While organizing the gathering, SDC members discussed with SDC Chair and TK-12 Diversity Coordinator Tyeshia Brown before deciding on cultural competency as the focus of this year’s discussion because of its relevance among students and in society.

“[Cultural competency is] to understand different cultures, understand that we are all raised different — our culture, our backgrounds are all different,” Brown said. “Understanding that certain [cultural customs] happen in certain families that are different [from others] will help us understand not to judge right away.”

Brown expressed hope that the gathering would help attendees develop a stronger sense of understanding of different cultures and opinions and feel more comfortable discussing social issues pertaining to diversity and equity.

More than 50 people attended the event. Attendees from the Harker community were joined by students and teachers from other schools such as Menlo High School and the Kirby School in Santa Cruz.

“[Dr. Glasgow] was inspiring both times, just to kind of talk about his personal experiences as an African American man, and also an out LGBTQ+ person, and school administrator,” Dr. Witschorik said. “He shared some, especially last year, I think he’s shared some inspiring, moving personal stories that I found to be impactful.”

Dr. Glasgow, a returning speaker for the gatherings since the first SDLG was hosted in 2019, began the event at 10 a.m. with a keynote speech, with Williamson presenting afterward. Both presentations focused on obstacles to developing cultural competency and discussed methods to deal with the challenges. Dr. Glasgow spoke on dominant fragility, where those in a dominant position of power feel uncomfortable when their position is challenged. Williamson’s speech introduced the topic of white fragility, discomfort on the part of a white person when confronted with information about racial inequality. Both speakers discussed how to identify white fragility, after which Williamson offered advice on turning fragility into agility through steps such as self-reflection, being willing to listen to others and being open to having conversations with people holding different social and political viewpoints to resolve conflicts.

Separate student and adult sessions began at 11:20 a.m., offering a safe space for students and educators to participate in activities helping to broaden understanding of diverse perspectives and opinions in a variety of scenarios.

The students engaged in whistleblower role plays where they were presented scenarios of different social issues in which they could choose whether to speak up against the situation. White people were given five opportunities to speak up, whereas people of color were limited to three, to reflect white privilege in making these decisions, but also general limited ability to speak up in every issue witnessed. Afterwards, students who spoke up in each scenario discussed why they chose that particular situation to do so.

“It was eye opening, because there were some [situations] that I didn’t see the other side of,” student attendee Harshini Chaturvedula (10) said. “And so when other people were speaking, I was like, ‘Oh, so that’s another way to look at it.’ [It was an] interesting experience.”

When the adults rejoined the main Zoom room at the end of the event, students and adults each shared the main topics of their discussions, which was followed by a personal reflection and closing at 1:30 p.m.

“My favorite part was when we came back, and the adults learned about what the students had been discussing, and vice versa,” Dr. Witschorik said. “It was inspiring just to see how both the teachers and the students had learned and had gotten inspiration for ideas they could take back to school to Harker to implement.”