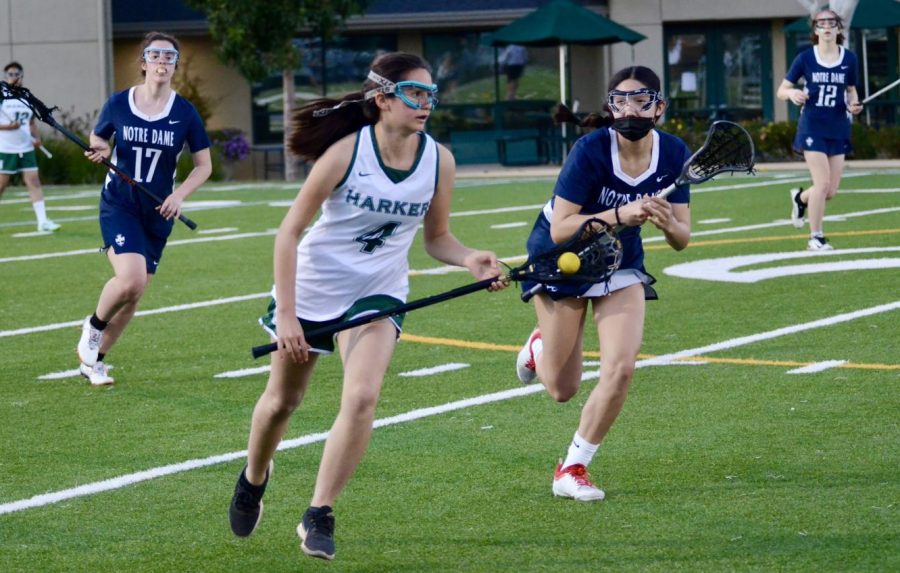 Katelyn Abellera (11) cradles the ball while running past Notre Dame defenders. Katelyn scored the first goal of the game for the Eagles.

The game began at 4:30 p.m., and in the first six minutes, Notre Dame scored two points. Consecutive goals from juniors Katelyn Abellera and Kyra Hawk evened the score with 10 minutes remaining in the first half. Kyra scored another point for the Eagles in the last two minutes to tie the score once again at 3-3. Katelyn, who is a midfielder and attacker, explains that the team’s halftime adjustments helped boost their performance in the second half.

“We learned from our mistakes halfway through the game,” Katelyn said. “We had a talk with the coach, and after that we made changes  to fix the mistakes and that really helped.”

The Notre Dame Regents gained a 3-5 lead a minute into the second half, but the Eagles responded just as quickly with another goal from Kyra. With 16 minutes left on the clock, the Regents were up 4-7, but the Eagles fought hard, with Kyra and Riyaa Randhawa (12) each scoring a point in the next two minutes. At the halfway mark of the period, another goal from Kyra had brought the score to 7-8, which remained the same for the rest of the night.

The team had participated in several scrimmages as practice, but the game on Friday was their first real match of the season. Captain Thresia Vazhaeparambil (12), a midfielder and defender, voices optimism for the season ahead.

“Seeing all of our team’s progress from the first game until now, it’s so amazing,” Thresia said. “Especially because we have a lot of players who are new this year — a lot of freshman and sophomores — I’ve seen a huge improvement in everybody because they love this game and they have so much passion for it. They’re coming out everyday and really going for it.”