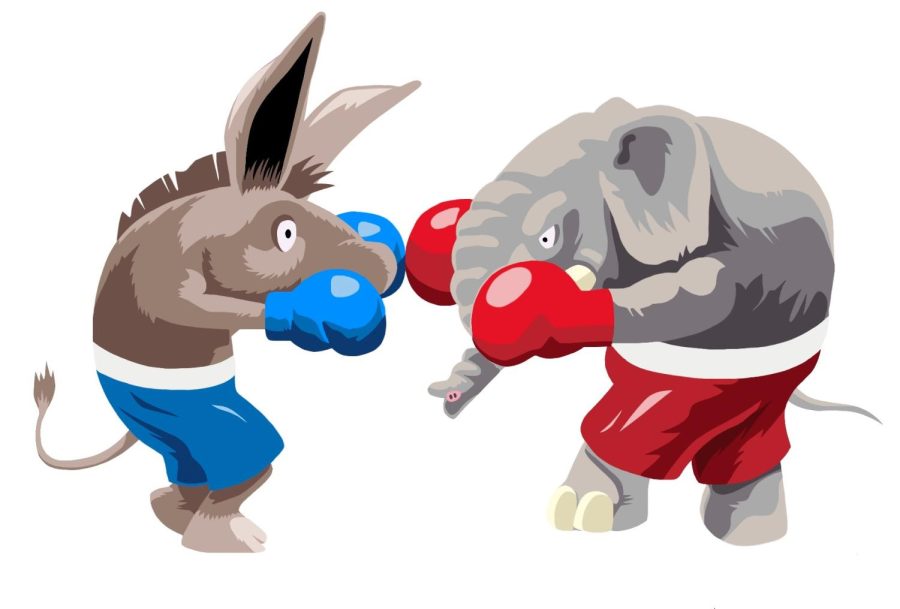 In Congress, everything is a party-line vote these days. Impeachment, COVID stimulus packages, the infrastructure bill, increasing the debt ceiling, voting rights, you name it.

In Congress, everything is a party-line vote these days. Impeachment, COVID stimulus packages, the infrastructure bill, increasing the debt ceiling, voting rights, you name it. Regardless of how popular something may be, one side almost always stonewalls it. Partisan animosity is the main cause for this voting pattern — the infrastructure and stimulus bills, for example, had substantial bipartisan popular support, at least for their contents if not for the bills themselves, but both of those topics have been highly controversial in Congress.

The partisan animosity that we now see on the national level is part of a positive feedback loop with many components at more local levels, including:

1. The perception of sides of the political spectrum as monolithic homogeneous entities. The GOP itself (to a lesser extent, also the Democratic Party, though it has to deal with Senator Joe Manchin (D-WV) and the like at every turn) currently does seem to behave like that on a lot of issues, but voters certainly don’t, especially independents with some ideological leanings in one particular direction. However, said perception entails conflating people with more moderate political leanings with ultra-far-left or right people with opinions on the level of hardline Marxism or active oppression of men and white people or white genetic superiority or “rich should get richer” capitalism.

2. Social media as an echo chamber. Specifically, it ends up functioning as an environment where like-minded people bounce ideas off of each other and all pick up the same opinions, whether that be Instagram stories about Black Lives Matter and rape culture or Telegram posts about Ashli Babbitt and microchips. Social media platforms are actively incentivized to be echo chambers, because that causes people to spend more time on said platforms bouncing those ideas around, whereas encouraging substantive discussion would lead to people disengaging from an active argument sooner or anger surrounding an issue dissipating more rapidly, both of which reduce time that people spend on the platform.

3. National news as an echo chamber. People follow news outlets with biases similar to theirs (read: Fox News and CNN), writing off news outlets with different political opinions as invariably incorrect due to ideological biases. For similar reasons to social media, these news outlets have incentives to be biased in favor of one side to capture and breed anger and attention about specific issues or parts thereof. Local newspaper circulation has been falling for over 20 years, and that decline of local news further exacerbates this problem. It causes local politics to be viewed on party lines because there’s nothing for people to consider except national-level information, leading to further homogenization of national politics and national trends more directly affecting local politics.

4. Confirmation bias associated with echo-chamber effects. People often selectively interpret information in a way that conforms with their preexisting worldviews, and when echo chambers strongly reinforce their worldviews and create mechanisms for rationalizing away contradictions (think QAnon’s use of the idea of “reverse psychology”), they reinforce factional divides and prevent compromises.

The above issues result in consequences including (For those who are wondering, I personally do think that the GOP tends to be a worse offender when it comes to causing a lot of the problems that currently plague Washington, but the following problems certainly exist on and/or are caused by people on both sides.):

1. Stronger voter bases that will near-unconditionally support their respective political parties when they do more absurd things and their respective sides of the political spectrum when they collectively endorse more absurd things. For example, the core GOP base was probably largely fine with threats to force a debt default for reasons of GOP political expediency, despite the potentially disastrous consequences that a debt default would have for the economy. In addition, support for voting restrictions arising from the “Big Lie” appears to have strong support from the core GOP base, as well as very strong support in many GOP-controlled legislatures, despite its near-nonexistent factual backing in the face of several recounts.

2. Mass refusal to engage with people on the other side of the political spectrum, most notably by calling them “bigots,”“privileged,”“libtards,” “SJWs” (social justice warriors), “sheep” or otherwise using ad-hominem attacks instead of substantively addressing their arguments. Often also involves writing off opposing opinions as incorrect chiefly through confirmation bias. The idea of the monolithic political faction allows relatively moderate political opinions to be written off by association to more extreme opinions. This mode of refusal to engage also leads to a chilling effect where people hide unpopular opinions due to fears of backlash.

3. Reification of the monolithic partisan political faction. Because of echo chamber effects, communities (whether online or physical) can become more homogeneous in political opinions, further strengthening the perception that political factions all share all the same opinions. For instance, the statement “All Democrats believe the police ought to be abolished” could be a statement that continuously grows more and more true over time because people on the left are only exposed to positions such as “policing is fundamentally racist” but never any robust defense of positions like “policing is necessary to prevent crime.”

4. Ineffective activism. The endpoint of a lot of activism in the status quo is “raising awareness,” which is entirely pointless when that “activism” is trapped in an echo chamber and only ever bounces off of people who already know about it and agree with its message and purpose, instead of convincing people who are “on the fence” to change their minds. Even activism that is more visible to broader groups of people, like physical protests, is borderline pointless because of confirmation bias and due to political polarization in the government organizations that need to act to enact the policies that are the subject matter of said activism. Centrist politicians that might have been willing to compromise, especially on the subject matters of much of the activism in the Harker community, were largely wiped out of American politics between 2018 and 2020 — in 2018, the “blue wave” caused a lot of center-right Republicans to lose to Democrats, and by 2020, alignment with Trump was the most viable way for a Republican to win, so center-left Democrats in competitive districts often lost their seats to farther-right Republicans, the obvious case of Manchin aside. That certainly harmed moderates on both sides, but the effect was likely somewhat more pronounced on the right.

And before somebody tries to say that I’m conflating activism for racial justice or global warming or something with the most extreme of the extreme right, I’m not. The “activism” of January 6th was much worse than anything that I know of from protests for issues like BLM, but my point is that the seeds are there for that statement to invert itself and cause a downward spiral of rising partisan extremism. Don’t let the seeds grow.

The only option for defusing this polarization is civil discourse, engaging in discussions that promote greater understanding of opinions with which people disagree. Such discussions also promote greater critical thinking about one’s own opinions and logical absurdities in their justifications that simply will never be pointed out in an echo chamber. America might as well be two separate countries on the same land within a few years. Deconstructing echo chambers is essential to preventing that from being a reality that makes action on every conceivable issue impossible.

Anyways, that all brings us to Harker, a community which seems to have many left-wing echo chambers and a few center-right enclaves. As far as I can tell, Harker isn’t full of people espousing ultra-far-right nonsense on the level of “vaccine microchips” or “COVID is a lie” or “BLM’s goal is to oppress white people,” but I do think the Harker community suffers from some of the above issues to a pretty significant extent, with echo chambers favoring left-wing ideas.

One trend that I’ve noticed in the friend groups that I encounter, whether sporadically or frequently, is that the groups are almost certainly either politically inactive or ideologically homogeneous. Hard-left groups seem to be more homogenous than center-right groups. This self-sorting phenomenon only seems to become more pronounced on social media platforms, where people have a similar level of political alignment but there are more people circulating politically-charged ideas within the echo chamber.

As an officer of a club that works to promote civil discourse (literally named “Civil Discourse Club”) I’ve encountered some people who seem to oppose it, especially where they can claim that discussing the second side to certain issues is racist, sexist, etc, as happened when we had a meeting scheduled to discuss Black Lives Matter and police reform that sparked some backlash, especially on social media, much of which denied that there are two legitimate sides to the issues of police reform and race.

There are two sides to everything. Contrary to what the aforementioned lot was suggesting, “Black lives matter” as a statement of fact is true, essentially axiomatically, but “the police should be defunded” and other such statements associated with the movement Black Lives Matter are not axiomatically true and are certainly up for discussion.

Even if people make blatantly racist comments, the only productive course of action is discussing why the associated opinions are bad — censoring them, which seems to be the most obvious course of action at first glance, just sends those opinions to alternative platforms where those opinions get amplified in echo chambers (read: Telegram). Further, accusing people of being racist as an endpoint to every argument is counterproductive, especially when dealing with the center-right — they aren’t part of some monolithic body of opinions but rationalizing them as that stifles productive discussion.

This is the national crisis to end all national crises. Every other issue that the government must act on is exacerbated by partisan polarization. We, as the Harker community, shouldn’t collectively remain complicit in reinforcing the positive feedback loop of echo chambers and political polarization. We may think we’re on the right side of things, but knowing as much is impossible without more rigorous testing of our ideas. Actual engagement with a diverse range of opinions is something that we should all actively seek to do.