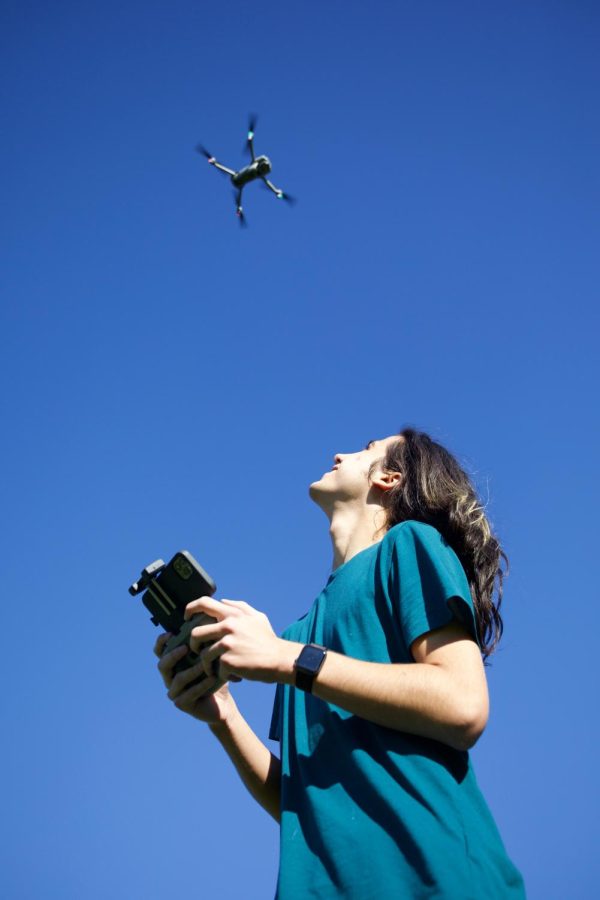 “[It’s true that] the worst thing that someone can say is no, but you're going to get a ‘no’ by default if you never go out and try to make a change or try and do something. The worst possible outcome is already going to happen if you don't try, so you might as well try," Allen Boyce (12) said.

As he looks up into the bright blue sky, Allen Boyce (12) squints his eyes to see past the vibrant sun reflecting on the ground. Fidgeting with the controller of his drone, he watches the machine cruise past him in a silently swift manner. Tucking his hair behind his ear, he points at the drone, his eyes flitting back and forth as he tracks the fast moving device.

Allen has always tried to look at life from outside of the box, attempting to find different perspectives on situations throughout high school. Using the drone, he has been able to appreciate the world in a different way, as it allows him to view his surroundings from a higher ground, giving him a new found appreciation for the nature around him.

“I really do enjoy how [the drone] allows me to get a perspective that normally is not possible, even [for] someone like me who never had any training,” Allen said. “It’s the nature of how the world is. If you can find the right place at the right time, anyone can make it look beautiful.”

Allen’s creativity manifests itself within several other outlets as well — most notably through performing arts. Although Allen has always had a welcoming and amenable personality, he hasn’t always felt comfortable around other people. Through his high school discovery of performing arts, he has been able to see himself grow into the person that he is today. He credits the required performing arts classes for introducing him to this new environment.

“I’m very glad that we are required to do a Study of class because my dad and I would have never wanted me to take anything like that, but it was required so in freshman year I did Study of Theater,” Allen said. “The more I did it, the more I realized that I really like this,” Allen said.

Determined to expose himself to more performing arts experiences, he joined the certificate program, participated in the fall play during both his sophomore and junior years, and performed in Student Directed Showcase (SDS).

Allen finds joy in not only performing and learning new skills through performing arts, but also meeting new people and making friends.

“It’s always the people,” Allen said. “Whenever I think of memories I have with acting, it’s never really about a performance that I do, it’s about the journey you take to get to the final performance.”

As his passion for learning more about performing arts grew, he found other places to learn, including opportunities outside of school. Allen recalls memories of a summer program he took last summer at the University of Southern California (USC) and how, although everyone was virtual, he was still able to create lasting memories and bond with his fellow peers.

“None of us ever met in person, [but] by the end of it, we were so … unimaginably close to each other,” Allen said. “There’s nothing I’ve ever had or anything I can really think of that can have that same level of connection with other people as theater. [Theater] is an opportunity to connect with other people, and I really appreciate it.”

His love for performing arts has not only fueled his presence on the stage, but has also influenced his interactions with his friends, as he feels he has transformed into someone who is more comfortable with himself and has learned to become more outgoing and confident.

“Without theater, I never would be as big as I am today,” Allen said. “People terrified me, and they still do a little today. But there’s something that along the way clicked for me, and I decided to be bigger and have a lot more fun when I’m allowing myself to be louder, giving me that confidence to know that any decision I make is going to be okay.”

The people he surrounds himself with have also seen these positive changes within Allen. Close friend Rohit Tallapragada (12) expresses his happiness for being able to stand by Allen’s side through his growth.

“Part of how outgoing and funny he is has a lot to do with performing arts,” Rohit said. “I remember him being similar but still a lot more reserved before he started getting into performing arts and acting and singing. Now, it feels like it really has allowed him to evolve everything that was good about him even further. It’s been cool to see him change before my eyes in some ways.”

Biology teacher Dr. Thomas Artiss, who taught Allen in his eighth and 11th grade, has also described the growth he has taken to become down to earth and confident.

“Like many students I have worked with over the years, Allen grew by gaining confidence,” Dr. Artiss said. “He became more comfortable with who he is, and he is unafraid to let his true self be known. Many of us, myself included, try to present ourselves in a certain way at school. With Allen, what you see is what you get. Allen is the genuine article.”

Close friend Ishaan Parate (12) reflects on his favorite times with Allen, especially valuing the late-night chats with him.

“In general, we spend a lot of nights together playing video games, and those are always really fun memories,” Ishaan said. “I remember a couple nights ago we played Grand Theft Auto (GTA) from 8 p.m. to 4 a.m. Nights like that always go straight into the memory bank.”

Through the trials and tribulations of his high school experience, Allen continues to gain confidence through living by the motto, “If you never ask, the answer is always going to be no.”

“[It’s true that] the worst thing that someone can say is no … but you’re going to get a ‘no’ by default if you never go out and try to make a change or try and do something,” Allen said. “The “worst” possible outcome is already going to happen if you don’t try, so you might as well try.”