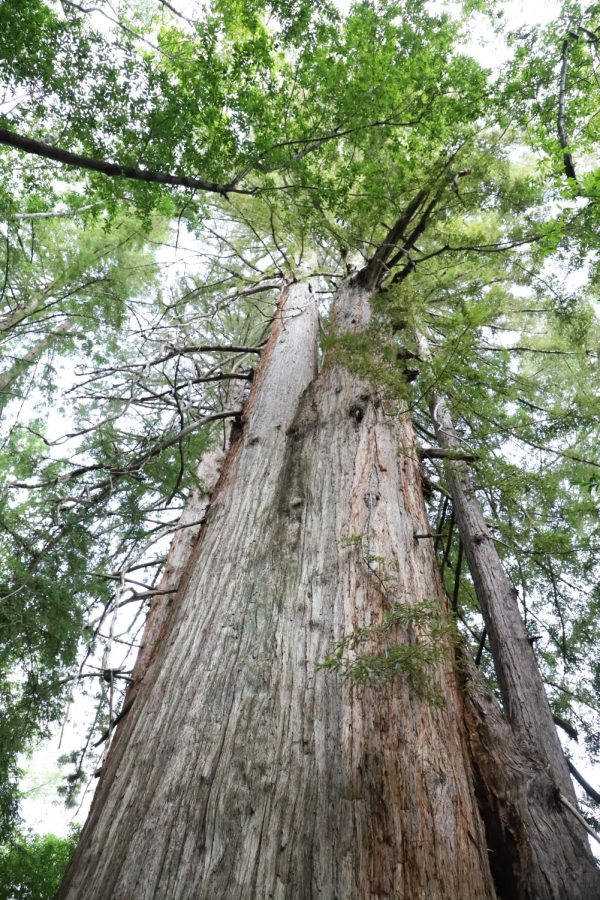 A redwood tree grows at the Bear Creek Redwoods Open Space Preserve in Los Gatos. These long-living organisms can reach heights of over 300 feet.

Leafy branches, suspended dozens of feet up in the air, cast a gentle shadow on the trodden dirt path below. Small squirrels and birds scurry around the tree, swiftly climbing from its massive, partially exposed roots to its thousands of green needles. This redwood tree, standing at about 300 feet tall, is a hero: not only do its rich nutrients provide ample food for surrounding amphibians and insects, but it also preserves other life on earth by combating climate change.

The impressive redwood tree is native to Northern California and flourishes in the cool, damp climate of the Pacific coast. Although the tree has humble beginnings as a small seed, don’t be fooled: redwoods can reach a height of around 367 feet and grow a base width of 22 feet. Their 600-year life expectancy and fire-resistant, thick bark serve as a stabilizing force in their natural environments, providing long-lasting resources for surrounding organisms. For example, redwood forests are often populated with various other species of trees, such as Douglas-firs and tanoaks, that benefit from the nutrients supplied by the redwoods’ complex root system.

Not only do redwood trees support other organisms in their local ecosystems, but they also play an important role in mitigating the effects of climate change. Their incredible size means that redwoods consume large volumes of carbon dioxide simply by living. In fact, just one acre of these trees stores about 1,000 metric tons of carbon, more than double of an average conifer tree, according to a 2016 study published in the Forest Ecology and Management journal.

“Since redwood trees capture a lot of carbon dioxide, it’s really important to make sure that they are continuing to grow,” Green Team treasurer Thresia Vazhaeparambil (12) said. “Without that, there is going to be a very severe impact on the biodiversity around them and the ecosystem as a whole.”

Redwood trees are commonly praised for significantly reducing carbon dioxide emissions in the atmosphere. Unfortunately, climate change has detrimentally affected the species, according to redwood conservationist non-profit organization Save the Redwoods League. Upper school biology and environmental science teacher Jeff Sutton notes how increasing temperatures could potentially stunt the growth of redwood forests as well as their biotic communities.

“Ultimately, those trees are considered to be like the climax organism of that ecosystem: they’re the ones that perpetuate the ecosystem,” Sutton said. “If the climate gets too warm or there’s not enough rainfall, which is what we’re experiencing, then fires are more likely, [and] the trees have a more difficult time living.”

Wildfires in northern California over the past few years have decimated healthy forests. In 2021 alone, 2.6 million acres of land, including forests, and thousands of structures were burned by the fires.

The Big Basin Redwoods State Park, located nearby in Santa Cruz, was forced to close down in August 2020 because of severe wildfire damage from the CZU Lightning Complex fire. Wildfires swept through 97% of the forest.

For the past one and a half years, the park has been rebuilding and caring for the damaged land, with staff and volunteers working to clear debris. Additionally, after the wildfire event, California State Parks began collecting data for a forest management strategy focused on the stewardship of California trees, including redwoods. Together communities can change their everyday actions to limit their contributions to climate change.

“There are really basic things that everybody can do in their lives,” Green Team secretary Siddhi Jain (10). “For example, we have signs out there that say ‘don’t idle when you’re waiting in your car’ because that’s contributing to greenhouse gases, which are warming the climate. Just take action to reduce your carbon footprint.”

According to Sutton, being educated and recognizing human contributions to climate change are only the first steps in mitigating its negative effects. Changing individual lifestyles in small steps actively helps the environment.

“We have to continue being involved, not being disconnected from ecosystems in nature,” Sutton said. “We have to be connected to it and realize that our activities can have good and bad consequences for nature. Once you’re educated, you can’t despair: you have to find things that you can do to make a difference.”If you would like to visit some of these natural giants yourselves, some local parks are the Bear Creek Redwoods Open Space Preserve in Los Gatos, the Big Basin Redwoods State Park in Santa Cruz, and the Redwood National Park in Orick, near the Oregon border.