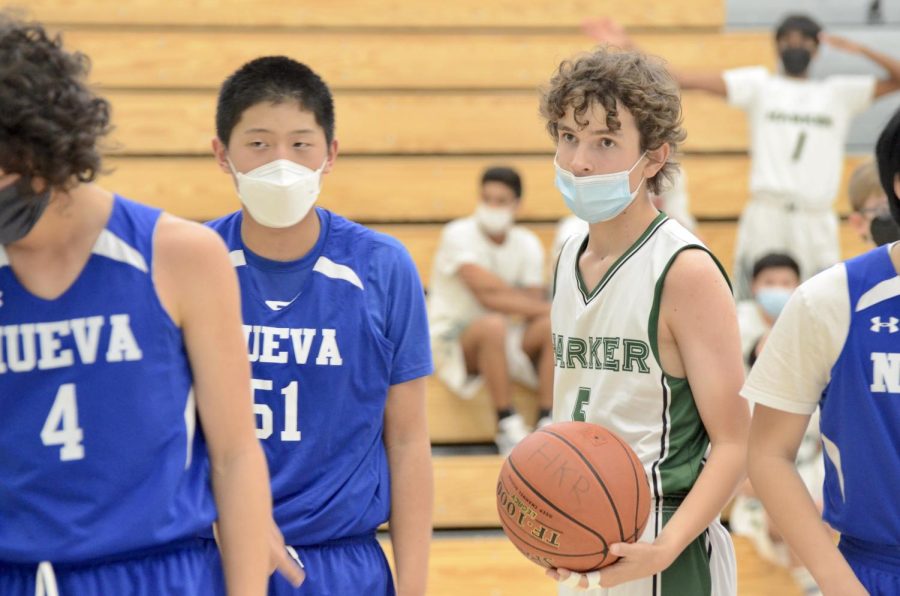 Liam Jeffers (9) waits for the referee's call while a teammate gestures to indicate the Eagles had possession of the ball. The referee decided in the Eagles' favor.

The freshman and sophomore boys basketball team defeated Nueva 45-30 last Tuesday for their first win of the season.

The Eagles jumped out to an early lead, scoring a series of two-pointers and a free throw to go up 9-3 by the end of the first quarter. Nueva gained control of the game in the second quarter, outscoring the Eagles 18-9 and heading into halftime with a 21-18 lead.

Using techniques like a full-court press, where defenders block the offensive team’s mobility to prevent them from easily making plays, the Eagles were able to reclaim their advantage in the second half with a series of unanswered baskets, resulting in a 37-23 lead at the end of the third quarter, and eventually, a dominant 45-30 victory.

“The boys played hard,” said Jake Burriss, the freshman and sophomore boys basketball coach. “They went down early in the first half, but they bounced back in the second half.”

Over the course of the season, Panav Gogte (10) has seen the team strengthen its bond, which he credits with the Eagles’ smooth performance on Tuesday.

“After every game, we make sure to [share] our favorite thing that happened in practice or at the game, which [was] really good team bonding,” Panav said. “The game was a great effort by our team on both sides of the court, defense and offense.”

The Eagles remain optimistic about the three games left on their schedule. They will play King’s Academy twice — today and next Tuesday — and then wrap up their season with a home rematch against Nueva on Jan. 28.

“They learned today that they can get it done, they’ve known that all the way,” Burriss said. “This first win is big for them, to put all the months of hard work and follow through in the end.”