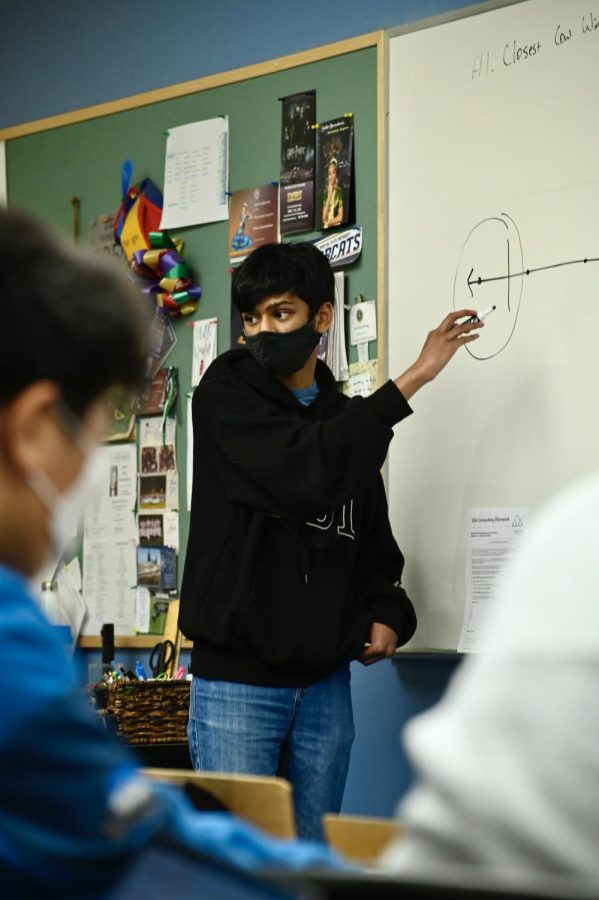 Kunal Jain (11) reviews the answers to the silver level questions from the last USACO competition. Kunal has been an officer of Programming Club for the past year.

HPC officers Jacob Huang (11), Rishi Cherukuri (11) and Kunal Jain (11), members of the lecture team, each discussed two problems from the most recent USACO contest, which took place in late December. They focused on the bronze and silver sections — levels that include more beginner-friendly and intermediate algorithms, respectively. The officers explained relevant concepts such as casework and the two pointers technique, which is usually used to search for specific values within a larger group.

“We went over all the solutions to the bronze and silver problems, because we know that just reading the solution guides on USACO’s website is not always the most fun experience,” Jacob said. “We tried to make [the solutions] more accessible. [The participants] actually caught on really fast.”

The lecture team held their first session on Oct. 5 focused on introducing Olympiad programming and available resources. The officers discussed rectangle geometry during their second session on Oct. 28, and they covered big-O notation, which is used to describe the time and memory requirements of specific algorithms during their third session on Dec. 7.

“Actually, one of the questions [that the officers covered] used a concept called graphs that I was actually not familiar with,” Sophia Zhu (9), who frequently competes in USACO and attended the silver section lecture, said. “[Before the lecture,] I couldn’t even understand what the question was really looking for. Now, I know there are data structures out there that can help me solve it.”

The team hopes their series can help students move forward in the USACO contests, since competitors must pass the bronze division before advancing to the silver, gold and platinum levels.

“I try to help people out because a lot of people I know are either stuck in bronze or silver, since the difficulty has gotten a lot in recent years,” Rishi said. “I think people think that competitive programming is something that they can’t do, just because it seems hard, but I think it’s pretty accessible to everyone.”

Additionally, Jacob, Rishi and Kunal started the lecture series to attract underclassmen to competitive programming, which may be intimidating at first. Susan King, upper school computer science teacher and HPC adviser, admires the officers’ initiative to bring more resources for the olympiad to the community.

“I think the lecture series comes from this passion and interest in the national competition,” King said. “To the best of my knowledge, the Harker teachers do not focus on the algorithms that tend to be used in competitions because there isn’t room for some of these other algorithms. I think it’s great that the kids want to fill it in.”