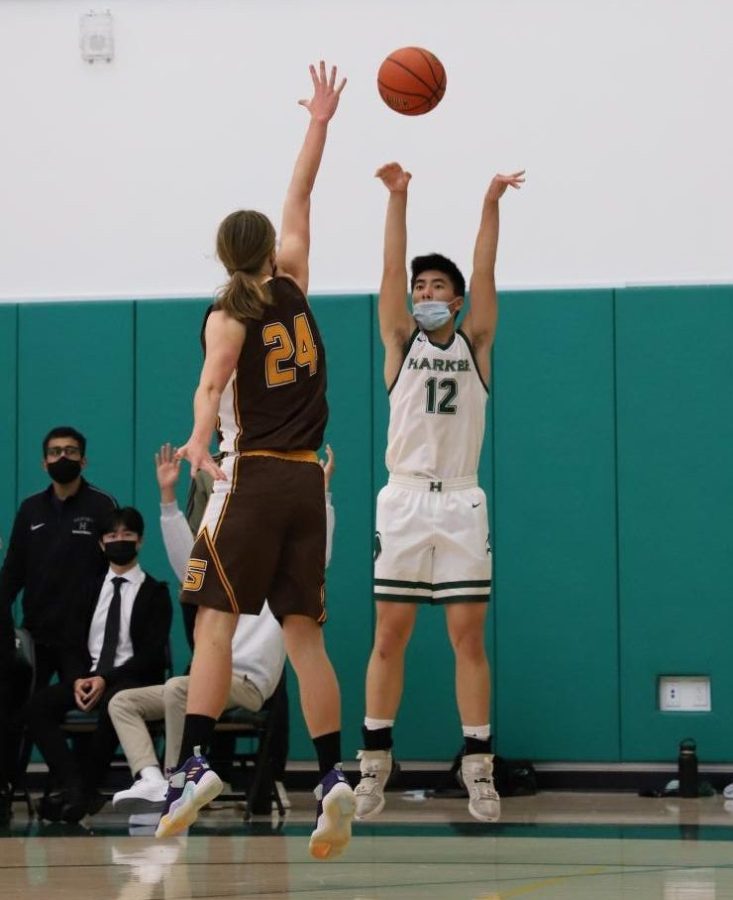 Charles Ding (12) attempts a three-pointer from the corner during the varsity boys basketball team's match against Gunderson High School. The boys won 63-51.

by Sabrina Zhu and Lavanya Subramanian

The varsity boys basketball team defeated Gunderson High School 63-51 at home last Thursday, Dec. 30. Bowen Xia (9) put the Eagles on the board with two free throws. Kevin Zhang (10) and Bowen then each made layups in the final minute of the first quarter to extend the Eagles’ lead to 13-8.

“I think we really took pride in owning the glass on both ends of the floor, ” Cutum Derecho, assistant varsity boys basketball coach, said. “We didn’t do so much of a good job of taking care of the ball, but we made up for it in other places, which helped us ultimately come out on top.”

Charles Ding (12) opened the scoring for the Eagles in the second quarter with a jumpshot. Abhi Namala (11), who was fouled twice, scored six points, while Kevin, Andrew Chen (12), and Om Tandon (10) all chipped in with three-pointers. Heading into halftime, the Eagles were up 31-20.

The boys maintained their lead in the second half, with Abhi, Kevin and Om contributing a total of nine points in the first four minutes of the third quarter. During the final seconds of the quarter, Bowen converted a three-point buzzer beater to put the Eagles up 51-34.

“The most memorable moment for me was definitely [the buzzer beating three I had] at the end of the third quarter,” Bowen said. “I had no idea I was gonna make that. I just chucked it up. All my teammates were happy for me.”

The Eagles remained dominant in the final quarter, with Charles netting seven points, Abhi and Bowen each making a layup and Andrew scoring a free throw. After the game, Derecho commented on the team’s success in sticking to their gameplan and controlling the ball.

“We had three main points [coming into the game]: attack, contain and own the glass, and I think we did a good job on all three of those,” Derecho said.

Bowen noted how the team’s offensive mindset contributed to their dominant performance.

“We were just told to be very aggressive, to attack the basket and get rebounds, and I think we did just that, ” Bowen said.

As they approach the final weeks of their season, the team looks to maintain their consistent effort at practice and their aggressive approach on both sides of the ball in game.

“A few games back, we weren’t playing that well,” Andrew said. “I think [our goal going forward] is changing our mindset and going all out in practice.”

The team also defeated Andrew Hill 62-50 last Tuesday. Their next match is against Crystal Springs tomorrow.