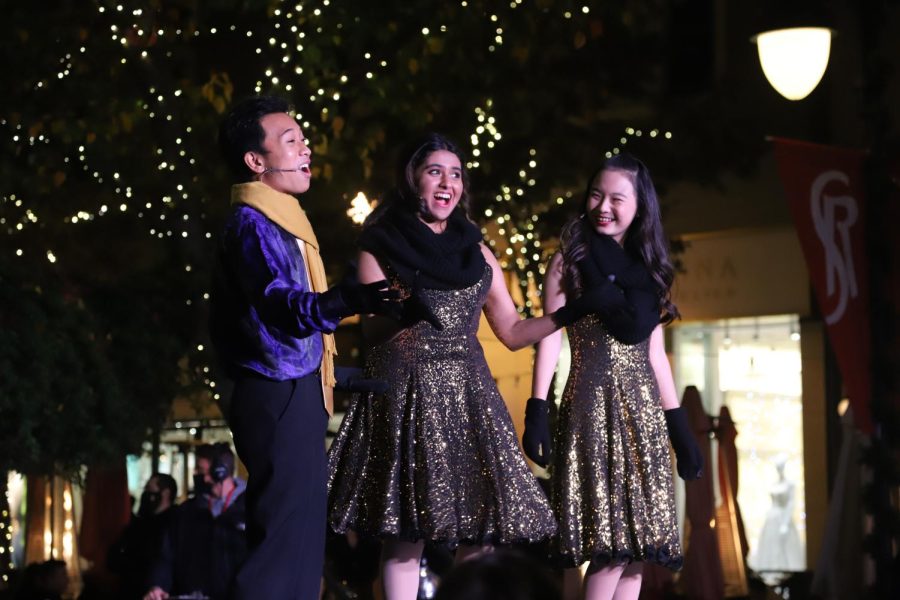 Three high school students, two jazzed up in glittery gold dresses and the other adorned in a navy-blue collared shirt with a gold tie and scarf, chatter animatedly on a stage in front of a 40-foot-tall Christmas tree and above an audience-packed square. Red and silver ornaments the size of their heads embellish the tree, and small golden lights illuminate the rest of the square and the stage. In the crowd, audience members crowd tightly around the square, whipping out their phones to take pictures of the excitement onstage.

Along with the upper school, the ceremony also featured performances from middle school and lower school students. Performers traveled to the Santana Row stage at around 2 p.m. to familiarize themselves with the stage and practice their routines. Downbeat members Samvita Gautham (11), Kris Estrada (11) and Shayla He (10) opened the show with a brief introduction to the evening’s performances.

“Honestly, [the whole experience] was amazing,” Samvita said. “It felt like I was performing in this normal way again, in the sense that it was the first time that I felt like this is what I’m used to.”

Harker Dance Company performed routines to “Chapstick” by Todrick Hall and “Santa Baby” by The Pussycat Dolls. Kinetic Krew danced to a mashup of “Get the Party”, “No Mañana” by the Black-Eyed Peas and “Levitating” by Dua Lipa and DaBaby, as well as a hip-hop Christmas song medley. Downbeat danced to and sang “12 Days of Christmas Confusion” and “Swingin’ into Christmas.”

Samvita, who performed at Santana Row for the first time on Tuesday, appreciated the opportunity to sing and dance in front of a large, live audience without a mask along with her group. Downbeat danced and sang in “12 Days of Christmas Confusion,” including comedic moments and spins and lifts in the number. Samvita also narrated and introduced the next routines between performances.

“Apart from the performances being on stage, we actually took our masks off and performed for the first time since my freshman year, which was insane, especially coming from the live audience,” Samvita said. “Being able to do that after such a long time and being able to smile at people [who] can tell that you’re smiling was a lot of fun.”

Audience member and Cantilena member Teresa Cai (12), who attended her first Santana Row show on Tuesday to support her friends, especially enjoyed the routines from the younger students such as “Celebrate (It’s Christmas)” by Forever In Your Mind, performed by the lower and middle school group Dance Fusion. One of her favorite performances was Downbeat’s “12 Days of Christmas Confusion.”

“I remember watching [the “12 Days of Christmas Confusion”] two years ago when they did it for the holiday tour,” Teresa said. “It’s always a lot of fun, it’s hilarious. I laugh every time, and it just brings back good memories.”

Members of Kinetic Krew also contributed to the holiday theme in navy onesies printed with candy canes, and their second routine featured golden gift boxes. Combined with the upbeat, festive song, Kinetic Krew’s energetic expressions and choreography caused the crowd to burst out in applause.

“Performing live was really exciting, and the thrill of the crowd cheering and shouting gave us a huge rush of adrenaline,” Vivek said. “Dancing with the boys was fun, and I’m really proud of how we did.”

A previous version of this article named the performances as part of the Santana Row “Tree Lighting Ceremony” instead of the “Spirit of the Row” series. The article has been updated on Dec. 11, 2021, to reflect the correction of this error.