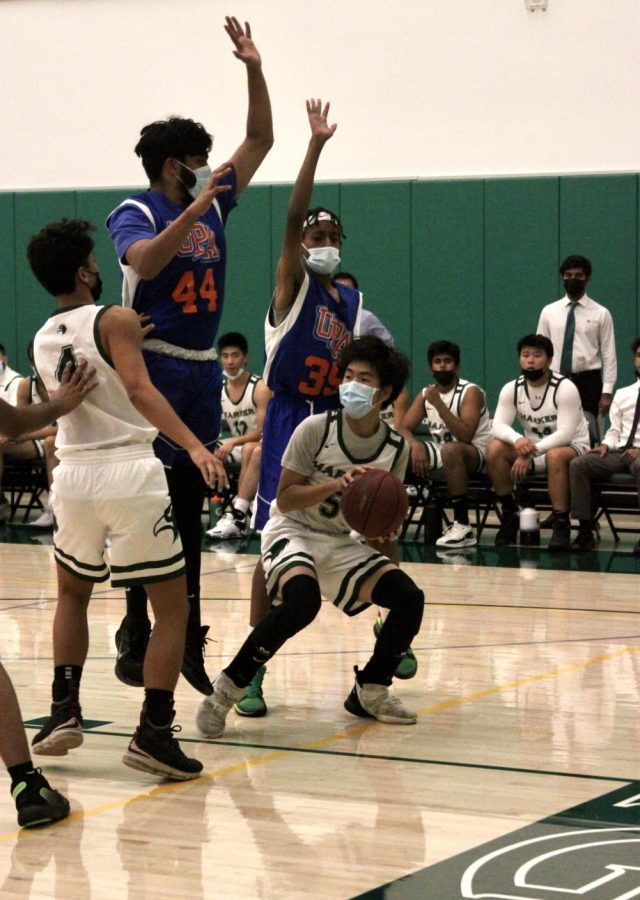 Holding the basketball, Kevin Zhang (10) crouches to see if any of his teammates are open. The boys beat University Prep Academy 67-24 on Tuesday, Nov. 30.

by Katelyn Zhao and Alysa Suleiman

The varsity boys basketball team defeated University Prep Academy 67-24 on Tuesday, Nov. 30. Abhi Namala (11) secured the opening tip-off, and Charles Ding (12) put the Eagles on the board with a 3-pointer. Max Xing (10) followed up with a 3-pointer of his own, bringing the score to 9-1 in favor of the Eagles. The boys ended the first quarter with a resounding 15-1 lead.

“I think I was really aggressive tonight, and I had some nice stops, but the best moment of the game was the three charges we had,” Max Xing (10) said. “We’ve only taken one [charge] all year, so my favorite moment was watching John [Zeng (12)] take that charge.”

According to Max, Upper School Division Head and boys basketball coach Butch Keller rewards the boys with cookies and brownies for taking a charge.

“It was the first win of the season, so it was nice to have a lot of the players back that we didn’t have on Wednesday, which obviously made a difference with the score,” Keller said.

During the second quarter, sophomores Michael Chang and Om Tandon converted 3-pointers to extend the Eagles’ lead to 22-3. In the last 45 seconds of the half, Charles made a layup that put the Eagles up 33-12 heading into halftime.

“They’re playing much better as a team, moving the ball better and just doing everything that they’re supposed to be doing as the season goes on,” Nicholas Nguyen, assistant varsity boys basketball coach, said. “The goal is always to make the CCS playoffs and win league.”

The boys lost 57-47 against Monta Vista High School on Nov. 24 during Thanksgiving break, but they won 63-58 against BASIS Independent on Friday, Dec. 4. Their next game will be on Dec. 9 in the Lynbrook tournament against American High School.