Salamander and insect biodiversity thrives in our local communities 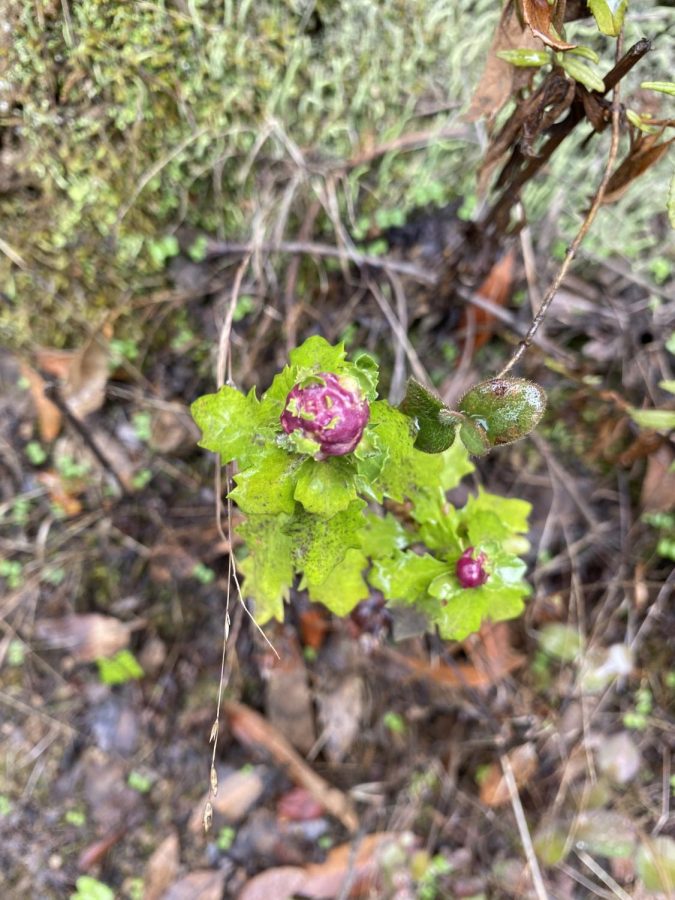 The Coyote Brush Bud Gall Midge grows on the California Coyote Brush. The adults lay mate, have offspring, and die all within 24 hours.

The La Niña winter climate pattern, defined by colder weather in the Pacific region, announced its arrival last month with its entourage of clouds and rain. With this change comes new life regenerating and re-emerging in the cool, damp caress of wintertime. Below are some salamander and insect species you can see on hiking trails around the Bay Area. Even common trails at Villa Montalvo, Rancho San Antonio and Mount Umunhum harbor abundant biodiversity!

Salamanders are a diverse order within the amphibians, a group that also includes frogs and toads. Like most amphibians, salamanders typically prefer living in damp conditions. As a result, salamanders are most frequently visible during the rainy season in California. During the hot, dry summer months, they remain dormant in underground burrows. In the daytime or when it is not actively raining, you can most easily find them in moist soil under logs. Make sure to disinfect the bottoms of your shoes by spraying them with alcohol if you wander off-trail, as salamanders and other amphibians are highly susceptible to numerous pathogens. A new deadly fungal outbreak was reported just at the end of November.

The California slender salamander is a lungless salamander; it breathes through its skin. Unlike other amphibians, most lungless salamanders hatch into miniature adults rather than tadpoles, so they don’t require access to a body of water to reproduce. B. attenuatus is a tiny common salamander the width of a shoelace. Possessing an extremely slow metabolism, it can survive on just a few dozen flies per year.

The ensatina is another lungless salamander. This particular subspecies, native to the Bay Area, mimics brightly colored poisonous newts. The grooves along the sides of this salamander (as well as others) increase the surface area of the skin for gas exchange. Ensatinas and other lungless salamanders have a bone in their tongue that allows them to shoot out their tongues nearly a body length away within a fraction of a second, enabling efficient capturing of prey.

The California newt possesses a bright yellow-orange underside to warn predators and intimidate competitors. Newts are a group of rough-skinned salamanders, and unlike other amphibians, they metamorphose twice: first from an aquatic larva to a terrestrial juvenile and then back to a primarily aquatic mating adult. Adult members in the genus Taricha alternate annually between a terrestrial nonmating phase and an aquatic mating phase, during which their skin smoothens and their tails flatten to accommodate a swimming lifestyle. Newts produce from their skin the same toxin found in pufferfish, but they are only deadly if their toxins are ingested or enter the body through a cut in the skin. The genus Taricha is particularly poisonous, so resist the urge to lick them!

Next up are a variety of insects that form plant galls—abnormal swellings they signal plants to produce to house their developing young. Several groups of insects can produce galls; after they lay their eggs inside a stem, leaf, bud, or fruit, secreted chemicals induce the surrounding plant tissue to swell up, providing shelter and nutrients for the enclosed larvae. Many galls are most conspicuous in the fall when they reach their full size and mature adults emerge. Because the structure of each gall is highly specific to each species, such insects can readily be identified by their galls alone.

Wasps of this species are some of the largest in the gall wasp family. Their correspondingly hefty galls can exceed the size of a golf ball, earning them the nickname “oak apples.” These large outgrowths can simultaneously host multiple larvae at various stages in development. Because some birds can feed on these galls and other insects and fungi can cohabit with the wasp larvae, this species is an important ecosystem engineer.

This species, around a centimeter across, is readily identifiable by its brightly colored, speckled galls that end in a beak-like point. This gall wasp infects several species of oak and primarily appears on young stems.

This gall appears on the budding tips of coyote brush, a common denizen of California chaparral. It is produced by a midge, which belongs to a group of insects more closely related to flies than wasps—an example of convergent evolution of gall inducement. The galls initially appear green and mature to a bright magenta-purple. The adults mate, lay their eggs and die all within a 24-hour period after emerging.