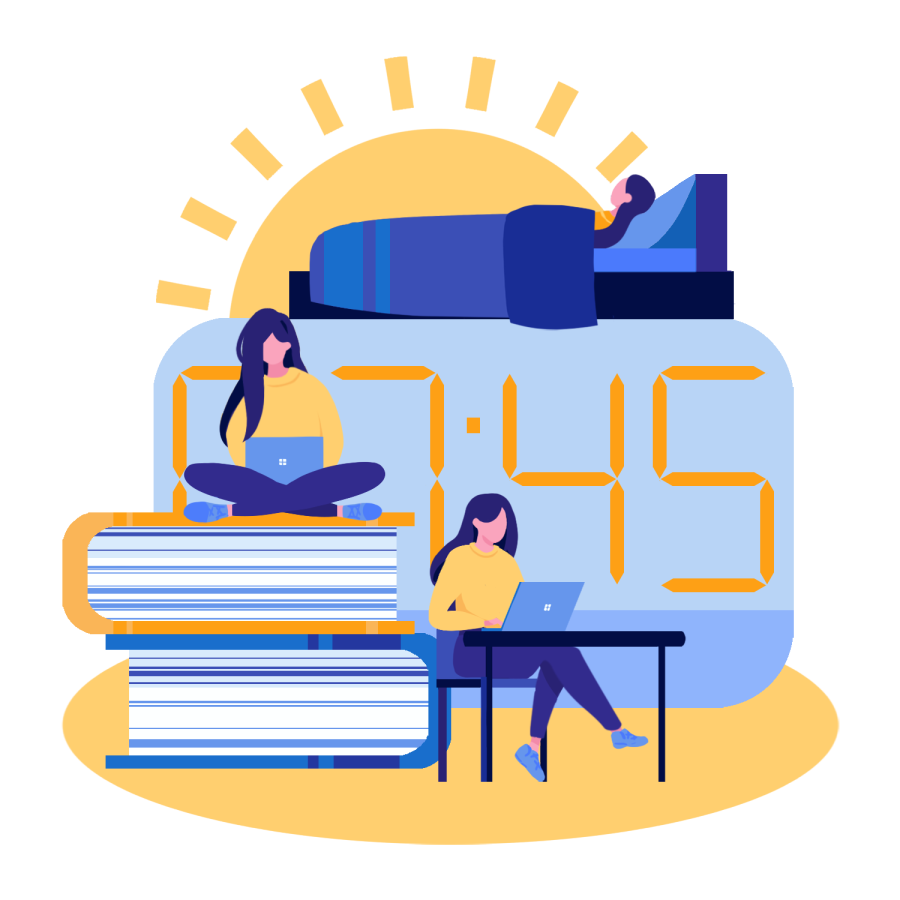 Sleep deprivation causes an unwanted domino effect on one’s health and safety, leading to a higher risk of obesity, depression and drowsiness during driving and difficulty concentrating in class for high school students. Giving students the opportunity to curtail chronic sleep loss with a later school start time would improve overall student wellness, including physical and mental health, academic performance and quality of life.

I reluctantly force my eyes open as the dreaded “Constellation” ringtone that is set for every weekday morning reaches my ears. The familiar strong chimes with quicker, twinkling notes in the background loop four times before I finally decide I have to get up. It seems like I fell asleep just a few minutes ago, yet it is already time to start my day. Only half awake, I haphazardly stumble across my room, tripping over charging cables as I make my way to my phone, intentionally placed far from my bed so that I can’t just hit snooze and go back to sleep. When I pull open the drapes, it is still dark outside.

My dance friends, who attend different schools, were shocked when I told them that I wake up at 6:30 a.m. on school days. I asked them what time they set their alarms for, and it was my turn to be surprised. I did not understand how they could get up at 7:45 a.m. or even 8:30 a.m. yet still arrive at school on time. Subsequently, I learned that despite having ending times similar to Harker’s, their schools generally started later— Saratoga High School begins at 8:30 a.m. and Menlo School at 8:50 a.m. for high school students. Wilcox High School begins at 9:05 a.m. on Wednesdays and 8:45 a.m. on all other weekdays.

According to Assistant Head of School Jennifer Gargano, the 8:00 a.m. starting time that students and faculty follow today first came about when the upper school opened in 1998. In the past few years though, school start times have garnered attention both in smaller communities and on the legislative scale, with a general push towards delaying them. Senate Bill 328, passed in January of 2020, mandates that all public and charter middle schools in the state of California begin at 8:00 a.m. or later by July 2022, with an even stricter requirement of 8:30 a.m. or later for high schools.

In response, some public schools have already begun to implement new bell schedules. Saratoga High School, for example, started at 7:50 a.m. until its starting time was moved to 8:15 a.m in 2016. In the 2020-2021 school year, its first bell was pushed even later to 8:30 a.m. Private schools like Menlo School, which describes its bell schedule as “designed to offer more sleep, greater balance, and a slower daily pace” on its website, have begun to mirror this adjustment as well. While this bill does not affect private institutions like Harker, our students and faculty could benefit just as much from a later start time, which is why I believe the change should be implemented.

Though most people would probably appreciate the chance to stay in bed for an extra hour or thirty minutes, a later rising time would be especially helpful for students since a person’s body clock shifts to later sleep times and wake-up times in teenage years.

The American Academy of Sleep Medicine recommends that teenagers aged 13-18 years get 8-10 hours of sleep per day, but the combination of endless homework and extracurriculars, a biologically delayed bedtime and an 8:00 a.m. school start time makes it extremely difficult for students to even come close to meeting this target for nightly rest. With my 6:30 a.m. wake-up time, I would have to go to bed at 10:30 p.m. to guarantee 8 hours of sleep and 8:30 p.m. for 10. Some of my dance classes end at 8:30 p.m., and on most nights, I am finishing up homework assignments around 10:30 p.m. rather than getting ready for bed.

Sleep deprivation causes an unwanted domino effect on one’s health and safety, leading to a higher risk of obesity, depression and drowsiness during driving and difficulty concentrating in class for high school students. Although some may assume that a later start time would simply encourage students to stay up later, with no net change in hours of sleep per night, studies show that with bell schedules supporting their natural body clock, students will generally go to bed at the same time and wake up later. Giving students the opportunity to curtail chronic sleep loss with a later school start time would improve overall student wellness, including physical and mental health, academic performance and quality of life.

A later start time would favor the adults around Harker just as much as students. Having more well-rested members of our community would lead to smoother interactions and more effective communication for all, whether it be in the classroom or at a lunch table. Furthermore, avoiding peak traffic hours would reduce commute time. This would allow everyone to spend the saved time on more enjoyable activities, whether it be enjoying a proper breakfast, chatting with others before the start of the day or even just getting extra sleep.

On multiple days towards the beginning of the school year,  my mom would drive past the “Strawberry Park” sign just a block away from the upper school’s entrance with nearly half an hour to spare until the first bell. While we would wait behind a barrage of cars, the clock ticking by for the next thirty minutes, my worries of being late to class would gradually grow. Because of these occurrences, my mom now insists that we leave our house fifteen minutes earlier to beat the daily loading zone rush. For me, each morning is a scramble to get out the door on time, so I would definitely appreciate a starting time allowing me to take a step back and go at a slower pace.

Despite these reasons for shifting the start of school to a later time, this change may not be easy to implement logistically. Whether it be shortening the length of the school day or extending school to end at a later time, any adjustment would require significant planning, as well as consideration of the effect the decision would have on certain groups in our community, such as athletes who must attend games or parents who need to drive to work.

Nonetheless, wellness has gradually risen as a top priority globally, especially within the last year. Even within Harker, the addition of breaks during classes is just one example of how the school is taking student and teacher wellness into account. The contributions that later school start times make to student and faculty wellbeing, supported by extensive research, make the idea worthy of consideration regardless of how long it may take to put it into action: Changing the upper school’s start time should be acknowledged as a possibility and not overlooked as a topic for conversation.