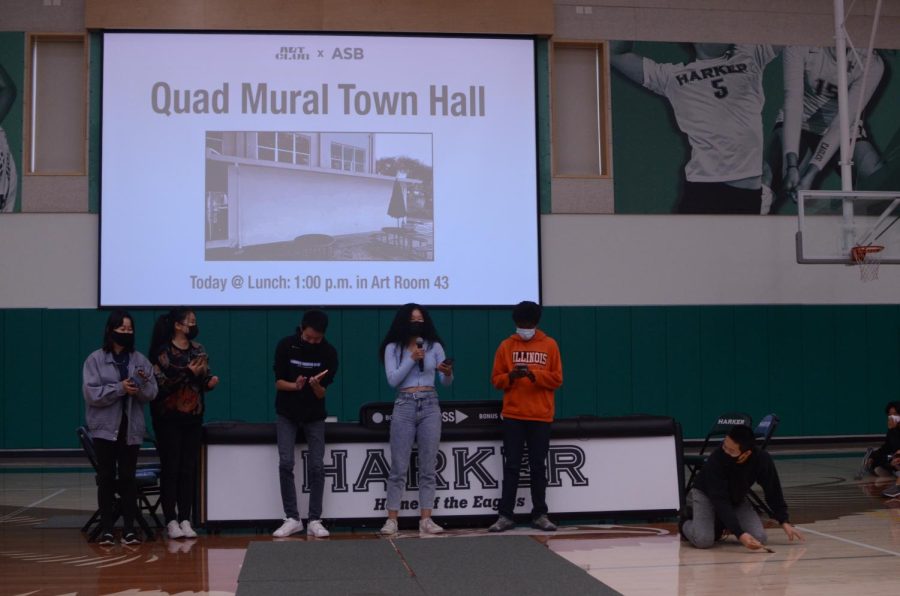 Michelle Liu (12), Eric Zhang (9), Cynthia Wang (10), Alex Lan (11), Gloria Zhu (12) and Kailash Ranganathan (12) from Art Club and ASB announced a town hall about a planned mural in the Quad that took place on Tuesday at lunch. A second town hall will take place in December, with the planned installation of the art mural in March.

Teachers and students could buzz in to answer a question, and Gordon Chen (11) called on them to answer. The topics covered in the 16 questions included academic topics, pop culture and Harker trivia. Afterwards, Emmett Chung (11) announced the final scores for each group, with the teachers having earned 95 total points and the students with 70 points.

Girls tennis played a video made by BB Ajlouny (11). BB noted that Johnathan Mo (11) assisted in the production of the video. Elvis Han (12), Zain Vakath (11) and BB Ajlouny (11) delivered the Eagle Update.

Girls tennis and boys water polo won their respective Central Coast Section (CCS) finals, and the teams joined Zain, Elvis and BB to lead the school in the “put your eagles up” activity.

Girls tennis won their second straight CCS championship with their victory 6-1 over Menlo. They also qualified for NorCals, which were held Friday and Saturday in Sacramento. Girls tennis defeated Menlo 5-2 on Saturday, winning the program’s first NorCal Championship.

Boys water polo earned the first ever CCS title for the program with their 9-5 victory over Archbishop Mitty and hosted Dixon High School at 5 p.m. on Tuesday in the Singh Aquatics Center. They lost 13-7 to Gunn High in NorCal finals on Saturday.

Audrey Feng (9) competed in singles and Rachel Hernandez (10) and Olivia Guo (9) in doubles  at the CCS tennis singles and doubles championships, which were held on Monday, Tuesday and Wednesday.

Emily Tan (12) and Michelle Liu (12) from Harker Journalism announced the third issue of the Winged Post and that students could receive a copy during lunch from members of Harker Journalism and from the green news boxes in front of Nichols, Shah and around campus. They also encouraged students to send an email to [email protected] with article suggestions.

TEDxHarkerSchool played a video introducing TEDx and this year’s event, themed “Transcending Boundaries,” which took place on Saturday from 9 a.m. to 1 p.m.

TEDx co-curators Sasvath Ramachandran (12) and Yejin Song (12) announced additional information, including this year’s speakers: chef, author, food activist and founder of Michelin star restaurant Chez Panisse Alice Waters, former MasterChef contestant and founder of the blog Milk & Cardamom Hetal Vasavada, internationally-bestselling author Dan Roam and Aaron Tran (12). All Business & Economics classes will receive extra credit for attendance and some other classes will be offering extra credit as well. TEDx sold tickets outside Manzanita this week during lunch, and students can also buy tickets by scanning the QR code on a flyer around campus or by going to TEDx’s website. Tickets are $25 each through Harker Pay and purchasing closed at 9 p.m. on Friday.

Kris Estrada (11), Anish Jain (10), Shreeya Merchia (10), Paulina Gicqueau (11), Ashley Ma (11) and Carol Song (10) from Harker Spirit announced Winterfest, which will take place next Monday from 3:30 to 5:30 p.m. Harker Spirit Leadership Team (HSLT) will be decorating the front of Manzanita with winter-themed decorations and hosting a movie night. Students can visit tiny.cc/winterfestmovie to help choose the movie. Spirit will also host holiday karaoke and a gingerbread house-building competition for spirit points. There will also be class window painting and tree decorating.

Michelle Liu (12), Eric Zhang (9), Cynthia Wang (10), Alex Lan (11), Gloria Zhu (12) and Kailash Ranganathan (12) from Art Club and ASB announced a town hall about a planned mural in the Quad that took place on Tuesday at lunch at 1 p.m. in room 43 in the art building. A second town hall will take place in December, with the planned installation of the art mural in March. If students cannot attend either town hall, a Google form will be sent out to collect ideas for the mural.

Ishaan Parate (12) from Investment Club announced the club’s first speaker event of the year, which took place at lunch Tuesday from 12:45 p.m. to 1:25 p.m. in the Innovation Center.

Trisha Iyer (10), Rupert Chen (11) and Nicholas Wei (11) from Junior Classical League (JCL) announced a new meeting series on learning Ancient Greek, which will take place weekly on Tuesdays from 3:30 to 4 p.m. The first meeting took place this past Tuesday in Latin, history and social science teacher Clifford Hull’s room in Main 1. They noted that no prior experience is necessary and to contact them at [email protected], [email protected] and [email protected], respectively with any questions.

Aaditya Gulati (12) and Kris announced that the Eagle Store is now open in the Nichols Rotunda. They also encouraged students to send their thoughts and concerns about campus life to the ASB Campus Life Committee at tiny.cc/clsurvey and noted that the snack bar was selling snacks, including IZZEs, for $1 each on Tuesday after the school meeting in the concession stands.

Dawson Chen (12) announced that Thanksgiving grams would be delivered to advisories on Thursday and closed the meeting by wishing everyone a transcendent Tuesday.