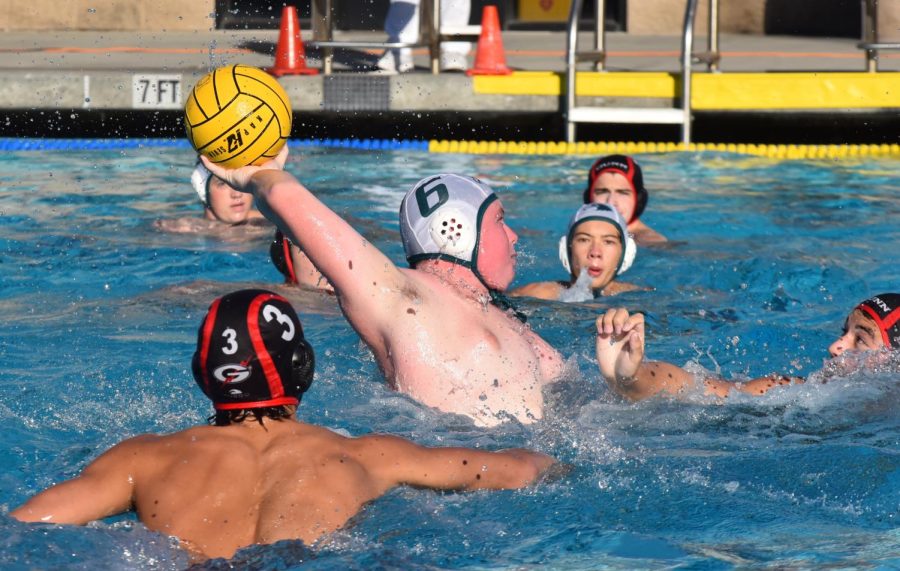 Lachlan Rossi (10) throws the ball into the goal as two Gunn defenders close in on him. After finishing second in league this season with a record of 11-2, the varsity boys water polo team won CCS and finished second place in NorCals.

Despite a close margin for the majority of the game, with a score of 3-4 in the first quarter, 4-5 in the second and 6-8 in the third, Gunn ultimately prevailed in the final quarter, during which they scored five goals to Harker’s one.

After the game, a tournament official awarded silver medals to the Harker players, while the Gunn coaches announced their names and congratulated them one by one. Captains Indigo Lee (11) and Thomas Wisdom (11) accepted the team’s second place plaque.

Coach Ted Ujifusa reflected on the team’s improvement throughout the season, which featured a second place finish in league, a Division III Central Coast Section (CCS) Championship and the first NorCals appearance in program history.

Anish Pai, one of four seniors on the team, shared the same mentality of constant growth.

“We were coming out looking forward to making Harker history,” Anish said. “We made it really far, and so we wanted to see how far we could take it. Obviously, the results of the game were not what we wanted, but I feel like we all grew as a group over the course of the year.

Lachlan Rossi (10) is optimistic that the team, which he describes as a “family,” will continue their success next season.

“Although we came short of winning league this year, I feel like this team that we have, this family that we have built, has definitely improved,” Lachlan said. “[Next season, I hope we can] win league and compete with some of the top teams.”