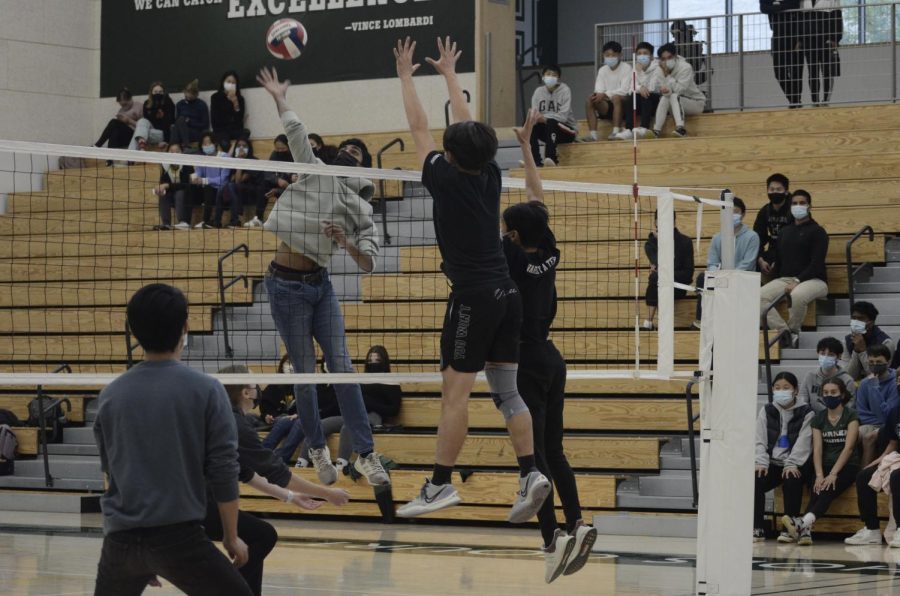 Spencer Mak (10) and Adrian Liu (10) block a hit from Vishnu Kannan (12) during the sophomores versus senior match in the “Hustle for Muscle” volleyball tournament. The seniors won the game 15-11.

by Katelyn Zhao and Ananya Sriram

Freshman, sophomore, junior, senior and faculty teams faced off in the annual “Hustle for Muscle” volleyball tournament hosted by Harker DECA and Harker Spirit Leadership Team (HSLT) during lunch last Tuesday and Thursday in the Zhang Athletic Center. The event’s initiative to raise awareness for the Muscular Dystrophy Association (MDA), a nonprofit that works to cure muscular dystrophy, attracted a crowd of around 100 students, administration and faculty.

In the past, DECA has raised money for MDA by selling ice cream during basketball, soccer and volleyball tournaments.

“This year due to COVID, we weren’t able to sell any food during the game like we normally do to raise money for the Muscular Dystrophy Association,” Harker DECA director of Finance Trisha Variyar (11) said. “We also did this to promote Winter Wishes, which we are doing this year for fundraising for the association.“

Through Winter Wishes, a fundraiser organized by DECA for MDA, students can give $5 to support the cause by Nov. 30 and send a holiday gift of chocolate, candy canes, hot chocolate, a note and a rubber duck or polar bear toy to someone at Harker. Although only Winter Wishes are being used for fundraising this year, DECA chose to hold “Hustle for Muscle” this year due to their tradition of holding the game and to help raise awareness for mda during the game, during which they could talk about the organization.

“It was good to see the community get together to watch the game and to support a good cause during lunch,” said Alfredo Alves, assistant athletics director for the upper school and referee for the tournament.

DECA has been fundraising for MDA for six years with annual volleyball tournaments, encouraging students to help Harker DECA support MDA’s cause to find treatments for muscular dystrophy in patients in America.

“Last year, we did the Lucky Charms fundraiser instead, so I thought it was great to collaborate with HSLT in person again and fundraise for MDA,” DECA Co-CEO Gianna “Gigi” Chan (12) said.

Both the freshmen and junior teams started off strong with serves from Aaron Guo (9) and Tyler Beede (11). Saves and spikes from Leo Sobcyzn (9), tips from Navya Samuel (9) and an ace from Norah Mehanna (9) put the freshmen up 7-6 five minutes into the match. The juniors upped their game, tying the score at 14-14 just before the final play. HSLT and DECA added an extra 30 seconds to the game clock to break the tie, and the freshmen team capitalized on the time, ultimately pulling ahead for an 18-16 victory.

The sophomores faced the seniors in the next match, with Tara Ozdemir (12) serving first. Blocks by Spencer Mak (10) and spikes from Vishnu Kannan (12) led to wild cheering from onlookers. Following a tip from Adrian Liu (10) and a spike from Spencer, the sophomores evened the score to 11-11. The two teams exchanged points for a majority of the match without any obvious winner, but in the end, the seniors won 15-11.

The freshman class advanced to the final stage of the tournament to play against teachers in the faculty-student match, with the freshman team winning in the first set. However, faculty caught up to the freshmen in the next two sets, giving the faculty a win against the freshmen.

“While I hope everyone who watched the game [on Thursday] enjoyed watching people in their class play a competitive game of volleyball, I also hope they became more aware of the reason why DECA is doing this,” Trisha said.

A previous version of this article incorrectly referred to the sophomore team as the freshman team in a photo caption. The article has been updated on Nov. 23, 2021 to reflect the correction of this error.