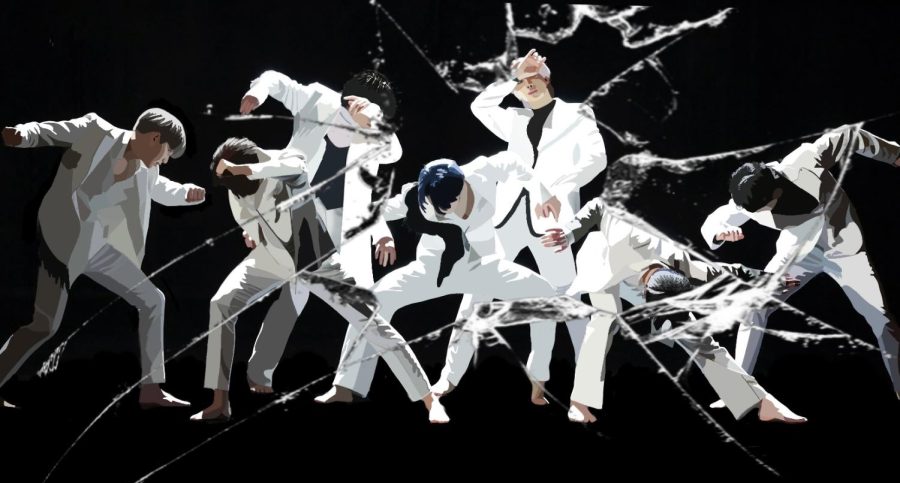 Blinding white lights illuminate the backs of the seven still silhouettes on stage, creating an almost halo-like glow. As the crowd chants their names and the first notes start playing, they hop out of their formation and launch into an electrifying performance of their hit single “DNA” at the 2017 American Music Awards (AMAs). The exuberant energy that radiated from their every movement pulsed from my TV screen and captivated 11-year-old me. Heart beating, I stared transfixed: not only had I never witnessed such complex choreography before, but I also couldn’t recall ever seeing an Asian artist perform at a major American award show.

For the next four years, I admired the seven people behind the performance: South Korean group known as BTS, currently one of the biggest names in music. The latest development in their careers, the release of “Dynamite” and other English-language songs, have brought the group extraordinary success and exposure in the American music industry, but these decisions undermine their identity as artists and ultimately hurt Asian representation in the west. Moreover, subsequent works where they resume singing in Korean, such as in their November 2020 album “BE,” lack the authenticity that pervaded the group’s pre-“Dynamite” songs and are attracting less attention than their English releases, concretely demonstrating decreased representation.

With their 2017 performance of “DNA,” BTS made their American TV debut and broke into the western market, trailblazing a path for future K-pop groups to follow. Over the next three years, they rose to new heights in the American music landscape with each subsequent release: “DNA,” their first entry in the Billboard Hot 100, reached a peak of 67, and “ON,” the lead single from their 2020 album “Map of the Soul: 7,” charted at number four.

Despite this gradual gain in popularity, the group’s transition into the American music market had brought on several new challenges borne from the biased nature of the industry. Although their accomplishments rivaled those of established western artists, the industry refused to pay them the proper acknowledgements. As a result, when BTS unveiled “Dynamite,” their most extensively-promoted release yet and their first song fully recorded in English, I could imagine why they suddenly decided to cater toward western audiences.

Previously, American award shows consistently excluded BTS from nominations in major categories: from 2017 to 2020, the AMAs confined BTS to less prestigious categories such as Favorite Social Artist and Favorite Pop Duo or Group, but this year the award show has nominated BTS for Artist of the Year and “Butter” for Song of the Year. A similar trend manifested itself with this years’ Billboard Music Awards (BBMAs) and the Video Music Awards (VMAs) nominations. Furthermore, their high-charting Korean songs received relatively limited radioplay compared to their western counterparts, but this issue disappeared with “Dynamite.” The song also earned the group their first Grammy nomination and number 1 on the Billboard Hot 100. Despite this success, I do not believe that BTS’s frustrations at industry injustices excuse such a drastic departure from their artistic roots.

The group’s seven members — RM, Jin, Suga, J-Hope, Jimin, V, Jungkook — none of whom are naive English speakers, put out a request for songwriters that could craft their first English language song, ultimately resulting in British musicians David Stewart and Jessica Agomba co-writing and producing “Dynamite.” In contrast, BTS had contributed heavily to the writing and producing process of their music from the start of their careers; the Korea Music Copyright Association (KOMCA) attributes over 170 songs to RM as a songwriter or composer and attributes over 120 to Suga.

With this artistic agency, BTS poured their personal thoughts and emotions into their work, through which the band ultimately seeks to spread an uplifting message of hope. As teenagers at their debut, the group’s first few albums celebrate the exciting promise of youth while also boldly critiquing the pressures they faced from older generations to succeed, despite changing circumstances putting them at a disadvantage. Subsequent albums explore themes of self-love and the multifaceted nature of identity, from their stage persona to their latent fears. BTS’ heartfelt earnestness ceaselessly shined through their music and message, a quality that attracted their legions of fans, including me.

As a result, “Dynamite” stands out among BTS’s discography like a sore thumb. Hackneyed lyrics devoid of emotional impact pack the song from start to finish. I couldn’t help but feel that I’d heard the generic and empty phrases “light it up like dynamite” and “dance to the break of dawn” a thousand times before. Compare this with “Black Swan,” where the group agonizes over their fear of losing their passion for music: “If this can no longer resonate / No longer make my heart vibrate / Then this may be how I die my first death / But what if that moment’s right now.” BTS can authentically relate these deeply personal fears only through the tip of their own pen. Writing and singing in their fluent language of Korean gives BTS the power to convey the intricacies of their thoughts through their own voice.

As a Chinese-American, I initially admired BTS as a beacon of Asian representation in America. At a young age, the faces of western singers such as Taylor Swift, Katy Perry and Kelly Clarkson dominated my TV screen; the same trend exists today. I remember feeling confused as to why the music world was only excluding Asian artists, and for a time I even believed that Asians simply could not be successful singers.

When I learned about BTS a few years later, seeing people who looked like me gaining fame and recognition in America filled me with pride and hope. What moved me the most was the way BTS had continued to sing in their native Korean even after entering the western music industry: I felt represented in their achievements because BTS stuck to their identity as Asian artists to earn them, despite the setbacks it brought. By continuing to release songs in their native language, they sent me the message that accurate communication through their self-written lyrics mattered more than western acceptance and the benefits that came with it. Through their incremental achievements, they showed me that pursuing success in a country often unwelcoming to people like me doesn’t need to come at the expense of our cultural backgrounds.

But with “Dynamite,” BTS directly negated these ideas, and I could no longer see them as positive figures for Asian representation. If they sing English words written by western songwriters, then they are no different from western acts. If they give up making music faithful to their identity as Asian artists, then they aren’t representing Asians positively. As I watched BTS relinquish their cultural roots in pursuit of western approval, I couldn’t help but wonder: was this an inevitable occurrence that would play out in my life, too? I promised myself I would not make that sacrifice.

Later that year, in November of 2020, BTS released their fifth studio album “BE,” inspired by the group’s experience during the pandemic. On the surface, the album seemed to mark a return to the “old BTS,” with six Korean-language songs filled with comforting and hopeful words intended to uplift listeners during the difficult pandemic era. But the message felt fake: after “Dynamite,” they had shown me the shallowness of their artistry that they so easily sacrificed for quick and easy success.

“BE”’s commercial performance highlights the superficiality of the staggering accomplishments brought by their English releases: BTS’s group’s post-“Dynamite” Korean language releases are not garnering the same success as their English language releases. “Life Goes On,” their second Hot 100 topper, did not receive any nods from major American award shows. Additionally, while “Dynamite” spent 32 on the Hot 100, 13 in the top 10, “Life Goes On” fell from number one to 28 to 93 in its second week and third week, before leaving the chart. This stark disparity demonstrates that BTS’s English language songs are attracting casual listeners searching for the next generic western tune, but they are not amassing devoted fans that will continue to follow their future releases. This is unsurprising: “Dynamite” isn’t displaying anything uniquely BTS, so why would listeners want to dive deeper into their music? Unfortunately, if this trend continues and audiences develop the expectation that English releases are now the norm for BTS, their extensive Korean releases will remain hidden, and isn’t this the exact opposite of representation?

With BTS showing signs of continuing down this troubling path, I hope their army of fans will realize the hurtful implications and consider withdrawing their support of these ideals. Authenticity, though difficult to maintain at times, is the only way to spread true representation, and I hope that others, both influential figures and fans alike, will not follow BTS’s example.