Talk around campus: Is art ever truly original? 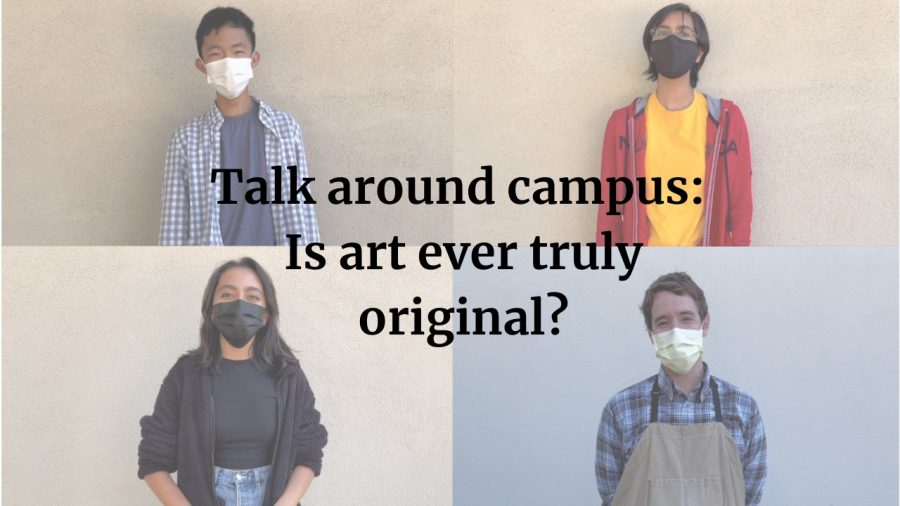 Is art ever truly original?

Is any work of art truly original, or are all creations simply extensions of what has already been made? Does the influence of an artist’s individual emotions, experiences and biases make their work unique, even when it is inspired by others? Four artists around campus tackle these questions and describe their creative processes when starting new pieces.

What type(s) of art do you create?

“I personally do film and music production,” Ethan Guan (9) said.

What inspires you to start a new piece of art?

“I think that especially feeling emotions that aren’t common or like something that’s very new tends to precipitate new artwork and inspiration,” Shareen said.

“Depending on where the show is, I do research in relation to the actual place, or the site the exhibition is at,” Caponi said.

Can you describe your creative process?

“With choreography, typically, we tend to first choose music, and then based on that, choose the theme,” Nupur said. “The theme can stem from personal experiences, like my theme for this year’s Dance Production is actually about bullying.”

Do you consider prior work when creating your own art?

“Yeah, I think looking at other people’s artwork is definitely a good way of learning and seeing how other people have interpreted the same piece that maybe you might interpret slightly differently,” Nupur said.

“I don’t know if I necessarily consider or use other artists’ work as a framework for my work now, but certainly, as a student, I definitely was more attuned to professional artists, what they were doing,” Caponi said.

Do you think art is ever truly original?

“No, I don’t think art is ever truly original. Our art is formed by looking at other people’s styles and learning from them and combining everything to form your own style,” Nupur said.

“Maroon Five’s “Memories” and Pachelbel’s “Canon in D.” Those literally share the same melody and the same calm tone, the same mood,” Ethan said. Maroon Five, what he did was that he took the melody, he built on it. He added his personality, his creativity onto the thing, which Pachelbel wouldn’t have been able to do by the time he wrote the song. So in my opinion, art isn’t ever truly original, there’s always something that you can trace it back to…However, just because art isn’t always truly original doesn’t mean that we shouldn’t give the artists that took these original ideas and made it something better less credit.”

“It depends,” Shareen said. “If it comes from yourself and your own emotions, I think it can be original, because you’re expressing who you are…No matter what you do, even if you reference another person’s piece of art, you’re always inspired by your own views.”

“Yeah, absolutely. I certainly do,” Caponi said. “I teach mold making, and in mold making,  we’re making a plaster mold of an object. Even if the object is an original object you make, then we’re reproducing. So we have this mold, and we’re casting multiples. Every cast of that actual original is slightly different…You be true to yourself, and the work that you’re making is authentically you, even if it is in relationship to or in response to something that’s already been done.”