Humans of Harker: One panel at a time 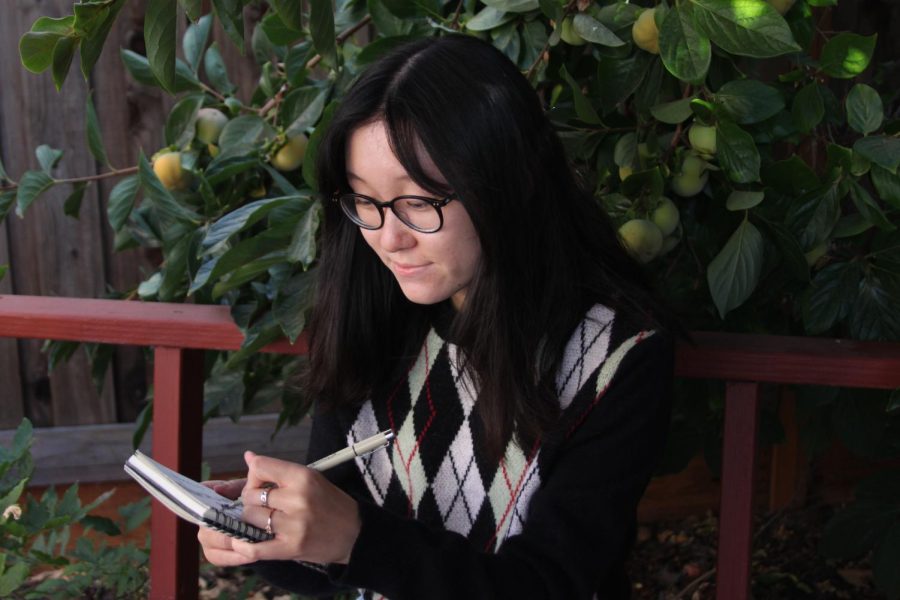 "Sometimes, you don't feel like you're actually living, and you're just going through the motions. If you don't feel satisfied with one of your days, it's like you're slowly dying instead of really thriving. That made me change my perspective on how I could actually do things I am happy to do, instead of doing what I think I should be doing according to society's norms,” Alina Yuan (12) said.

For hours on end during the summer, Alina Yuan (12) sketches and panels numerous pages, filling up her storyboard. She dedicates every day to her character, Lucian, a boy with synesthesia. With paperclip earrings, a Roman numeral seven tattoo on the back of his neck and obsidian colored hair that lightens with the progression of each scene, his appearance is like any other boy’s. Yet, the colors he sees in people reflect their deepest secrets, and one day he meets a person with the most colors he’s ever seen. Threads of ideas like independence, attachment and individuality, as well as overcoming mental challenges, spin the story into an exploration of his past memories.

The recollection of struggling to complete projects and never being able to commit to ideas portrayed in this character resonates with Alina and serves as her motivation to bring the comic to a close. When she finally finishes, the happiness from completing her first comic encourages a new storyline of comic creation in her life to form.

“When I was younger, I would have a bunch of empty notebooks that I would write stories in and illustrate,” Alina said. “I would never finish them, and I would always stop at chapter one. But I saw that the high school had a lot of cool clubs and communities for artists and writers. That is when I started creating more and talking with the really talented people here.”

Alina’s affinity for comics allows her to convey her thoughts in words and art through storytelling. Although the fixation on STEM in the Bay Area environment she grew up in initially created a barrier between Alina and her passion for humanities, connecting with people opened her eyes to new opportunities and artistic ventures like HELM, the Harker Eclectic Literary & Media magazine that she edits.

“[The STEM scene of Silicon Valley] stifled me a bit back when I was in middle school, but I realized that you need to find the right people,” Alina said. “It’s not that the humanities culture is dead here because it’s thriving and it might be hidden beneath the STEM awards.”

Alina expands her interests in humanities and research through the exploration of the intersection of literature, art and social psychology. She plans to synthesize these connections in her Mitra paper that aims to investigate the phenomenon of metaphorical life after death.

“In a sense, no one truly dies since their story will be immortalized [in] other’s memories through the preservation of their art or writing, just like how I am researching the constant re-interpretation of an author’s life through his autobiographies,” Alina said. “I hope that people who look at my work in the future use it to take what they want from it and gain understanding of their own lives.”

From learning about social psychology and philosophy, Alina applies her own definition of how to navigate through problems and how to think of one’s self to her life. Her friends cherish the energy of self awareness she exudes and her appreciation toward the psyche of humans.

“She’s therapeutic to be around; you feel your nerves ease when you’re around her because it’s either that her presence calms you down or she knows what to say or makes you laugh,” close friend Clarice Wang (12) said. “She speaks truth from experience as well.”

Close friend and fellow co-editor of HELM Reagan Ka (12) also reflects on Alina’s soothing nature and her quiet self assurance.

“She has a very warm aura, and I feel safe around her,” Reagan said. “She has such a comforting presence that even if she’s just next to you and you’re sad, it’s [still] comforting. What also makes Alina, Alina, is her honesty, confidence and tough love. I have no idea what I’m ever doing, so she’s a really good guide for that.”

Alina’s friendly demeanor and supportive attitude also come into play in the public forum debate team, where she acts as a leading figure.

“Alina brightens the room when she walks into it,” upper school speech and debate teacher Greg Achten said. “Everybody goes through ups and downs, especially in speech and debate at particular tournaments, but she has a positivity about her that is really refreshing and infectious.”

The positivity associated with Alina stems from a quote from a letter written by poet and prolific writer Jonathan Swift. His defining words helped to reorientate Alina’s mindset: “May you live all the days of your life.”

“Once I heard that quote, I was thinking to myself that sometimes you don’t feel like you’re actually living and that you’re just going through the motions,” Alina said. “If you don’t feel satisfied with one of your days, it’s like you’re slowly dying instead of really thriving. That made me change my perspective on how I could actually do things I am happy to do, instead of doing what I think I should be doing according to society’s norms.”