Humans of Harker: Meet me on stage 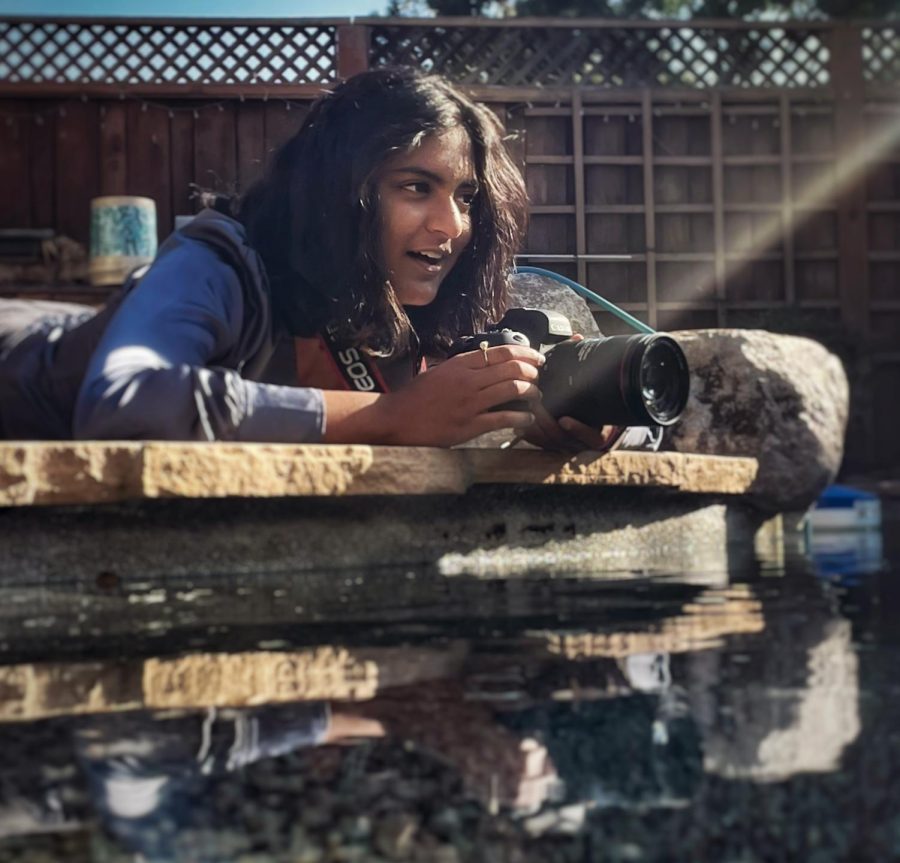 “[In] freshman year, making new connections and meeting new people was not a priority for me. I’ve realized now that if you actually reach out to people and make the effort to get to know them, [the different perspectives] make every activity worth it. It sucks to do things on your own," Anya Warrier (12) said.

Studio cameras, Adobe Bridge, Photoshop. A Canon shutter snaps shut in a fragment of a second. GarageBand, PremierPro, iMovie. Evening hours spent combing through edits of film and podcasts. This is the life of Anya Warrier (12), an avid pursuer of nearly all things multimedia.

Besides co-leading the Multimedia Club and Harker’s Podcast Network (HPN), Anya took the quarantine period to adopt yet another media project: the Getting In Tune podcast. She dedicates this platform to interviewing, casually chatting and playing games with musical groups from around the Bay Area and Los Angeles.

“I initially got into podcasting and filmmaking because I was curious about people, their lives and their passions,” Anya said. “I wanted to know how things worked, so I asked questions and made human connections. Whether it be because I’m interviewing them for a podcast or making music with them, [talking to people] is my favorite thing.”

Over the summer of quarantine, close friend Malar Bala (12) proposed the idea of a podcast for music to Anya. Since then, the two of them have been reaching out to larger, more diverse groups and honing their skills in editing.

“We faced challenges with outreach and editing at the beginning,” Anya said. “Before I started the podcast, I didn’t know how to edit at all, but now on GarageBand I can do anything I want. I didn’t even know how to operate a camera, so I spent much of my time fooling around with software and self-learning.”

Having witnessed Anya’s perseverance and proactivity in the initial stages of her starting Getting In Tune, Anya’s adviser and mentor of four years Meredith Cranston puts faith in her steady moral compass.

“I was so impressed that during this time of incredible upheaval and anxiety she had channeled that into a creative venue, a creative way to explore her feelings and express herself,” Cranston said. “[Anya] has a really good sense of self and it will not steer her wrong.”

In addition to using the podcast to put her thoughts into words, Anya also takes it as an opportunity to connect with people, especially after the period of isolation.

“I’ve been lucky to talk to really nice people, which was a little intimidating at first especially when [the podcast] is about people I admire,” Anya said. “The main [challenge] was getting out of my shell, but [theater and music have] really helped me become more comfortable with putting everything out there, and it made me realize how much I like talking to people.”

Anya attributes much of her development of self-confidence to upper school performing arts teacher Jeffrey Draper’s ninth grade theater class, which played an integral role in encouraging Anya to open up by piquing her interest in acting.

“We had seen each other fail and mess up [and be] the most vulnerable you could be in front of those people [in that class],” Anya said. “It made you realize that it’s okay to be vulnerable and it’s okay to make mistakes. [Mr. Draper] made acting seem more fun instead of high stakes. You feel like [the class has] your back and that you’re not alone.”

Even though it can feel daunting to approach strangers and get to know them, Anya’s interest in music and people creates a strong drive for her to venture into more challenging territory. Now, Anya is accustomed to taking her place on stage, with the experiences of numerous recitals, theater performances and interviews to learn from.

“It’s been a journey through me becoming less shy on stage, especially with all the singing recitals I’ve had to do and performances and auditions,” Anya said. “Some people can completely let themselves go on stage, [but] I feel like I’ve always been more shy and closed off. I think now it’s a lot easier for me to forget about people watching me and express myself thoroughly.”

Self-reliance reappears in Anya’s relationships as well as her academics. Friend of seven years Anjali Yamasani (12) admires the clarity with which she sees the world.

“She’s one of those people who you’re never worried is judging you because she’s so genuine,” Anjali said. “It’s kind of hard to find people like that. She’s a super interesting person to hang out with, and the conversation never gets boring. I think a lot of people see Anya like that, not just me.”

The down-to-earth personality that people appreciate in Anya is also one that she values in others. In understanding what an open mind means to people, Anya ensures that she returns the favor.

“When someone takes the time out of their day to listen and care about your problems, that’s super valuable to me,” Anya said. “I really appreciate it when people are accountable for their words through their actions, and [when they] actually have some opinion for what’s going on in your life.”

Malar, who has been at Harker with Anya since kindergarten, admires Anya’s seemingly natural charisma in social situations.

“If you watch her interact with other people, Anya is very good at making people feel like they’re being heard,” Malar said. “She is up for anything and follows through with everything, but she knows how to have fun, too. Anya would always be doing the funniest things, like putting on shows, singing and dancing in the hallways.”

Anya looks back at her previous years as periods of growth, bringing the learned self-assurance and confidence into every activity she participates in. Ultimately, Anya’s innate curiosity for the world around her will continue to inspire others and pave the road ahead for further personal flourishing.

“Freshman year, making new connections and meeting new people was not a priority for me,” Anya said. “I’ve realized now that if you actually reach out to people and make the effort to get to know them, [the different perspectives] make every activity worth it. It sucks to do things on your own.”