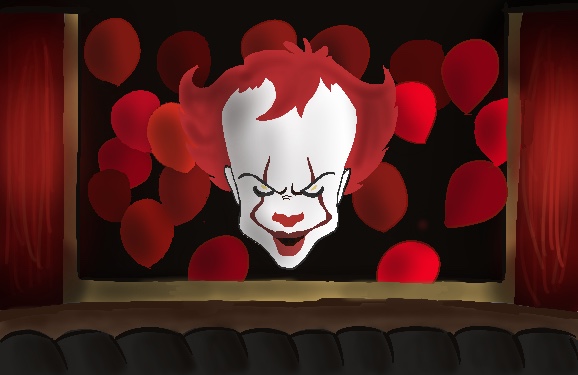 An illustration of the clown from the popular horror movie "It." The film, adapted from Stephen King’s novel and directed by Andy Muschietti, follows a group of children on their endeavor to hunt down a murderous child-killing predator.

Beep beep beep. The electronic tune on a toy rocket starts playing. The noise, seemingly innocent, contrasts the dead silence of the scene. The father runs, but not fast enough, only to see his son get snatched ruthlessly from the middle of the road by a pouncing black creature.

Horror movies, such as “A Quiet Place,” have amassed many fans and have grown into a very popular genre of film, with different people enjoying watching them for different reasons. Some relish in the thrilling, adrenaline rush they receive from jumpscares and plot-twists while others appreciate the specific techniques that make the films scary.

Some popular horror movies include “It,” a 2017 film adapted from Stephen King’s novel and directed by Andy Muschietti, which follows a group of children on their endeavor to hunt down a murderous child-killing predator. This two hour movie made over $150 million in its opening weekend , claiming Box Office Mojo’s title for the Top Opening Weekend in the Fall Season.

Indigo Lee (11), whose all-time favorite horror films include “It” and “The Sixth Sense,” a 1999 film about a boy who can see ghosts, first watched the latter in eighth grade and soon came to describe himself as a “horror fanatic.” Since then, he’s watched more horror movies and television shows, with his favorite type being those about child’s play.

Indigo appreciates surprises in horror films, which are unique to this genre. Not knowing plot twists and jump scares adds to his enjoyment of the film.

“I like [watching horror] because it’s thrilling, and you never know where the story’s gonna go,” Indigo said. “There are pretty much no rules in a thriller movie like in an action movie, where you will always have the hero ending up in a positive situation at the very end of the movie, and I didn’t like that. I like the twist that four movies add where it might end up in a positive situation or everyone could die, and it would be horrible.”

For Indigo, a director’s or author’s choices can make the movies even more thrilling, in addition to jump scares. These combined unique aspects of horror films give Indigo an adrenaline rush while watching, despite how scary they can be.

“I definitely close my eyes at some point; I’m not gonna you know have shame in doing so,” Indigo said. “I do get a rush, and I feel like it’s also a rush because of a surprise or jumpscare interference in the plot, but even more, the tactics that the author uses or the director uses to convey information and scariness.”

English teacher Ohad Paran enjoys horror movies for the same reason, searching for deeper meanings and metaphors in horror films, that a script writer or director conveys through horror, which he believes make them even more interesting and scary.

“There are horror movies that are horror in that they’re terrifying. They’re there to make you think and to give you the question of why you’re afraid or also to use the horror as a vehicle for something totally different,” Paran said. “The scary aspect of the film is not really about the fear, but it’s about the themes that are underneath the fear.”

The first horror movie Paran ever watched was “Event Horizon” (1997), about an experimental voyage on a ship that enters hell, which has an underlying message of uncontrollable machines that Paran believes makes the film even scarier. As a teenager, he did not approach the horror genre, but watching and understanding the “Event Horizon” changed his views.

“As I was growing up, I thought that horror was trashy, and then I read a few reviews of horror movies,” Paran said. “I read a review of this movie ‘Event Horizon’ — it talked about how the movie is really a metaphor for technology and I was like, ‘That’s really interesting. I want to go watch this movie.’”

Paran’s favorite types of horror films are those that use horror to convey underlying metaphors and movies that take risks with how they communicate fear. One such experimental movie Paran appreciates is “A Quiet Place” due to its experimentation with sound (or a lack of sound), the director’s ability to still make the film scary and the movie’s message about familial love.

So what makes one person enjoy horror while someone else does not? And why do some people watch horror, despite the movies inciting so much fear?

Upper school Psychology teacher Dr. Julie Turchin commented that individuals have different levels of a capacity for arousal and emotion; just as some people like skydiving or roller coasters because of the adrenaline rush they receive, others do not. Individuals have different tolerances for stress and stimulation, with some becoming energized from the sensation while others have that sensation turn to fear.

Another reason some people may like horror movies is the connection with others, according to Dr. Turchin, having fear together in a controlled environment.

“People like emotions, and we like to connect with other people,” Dr. Turchin said. “And experiencing emotions as other people are experiencing them is one way that we connect. It turns out that it doesn’t even matter if that’s virtual. I think experiencing scary emotions, when they’re controlled, helps us with emotion regulation.”

Yet even though watching horror movies may allow people to bond and regulate their fear, Dr. Turchin advises students to know the limits of their personal tolerance for stress to prevent the fear from becoming real or harmful.

“If you’re someone who doesn’t like our movies and your friends do, don’t get pressured into watching it, if you don’t like it,” Dr. Turchin said. “That’s where the only harm can come is just if you’re the kind of person who would rather something a little bit less scary and you’re forced into it. That’s upsetting.”

As the spooky Halloween season approaches an end, some horror films have just been released for viewers to enjoy, including “Antlers” and “Last Night in Soho” which are in theaters and “Hypnotic,” released on Netflix.