School meeting recap 10/28/21: National Coming Out Day announcement, pumpkin carving and ‘Much Ado About Nothing’ 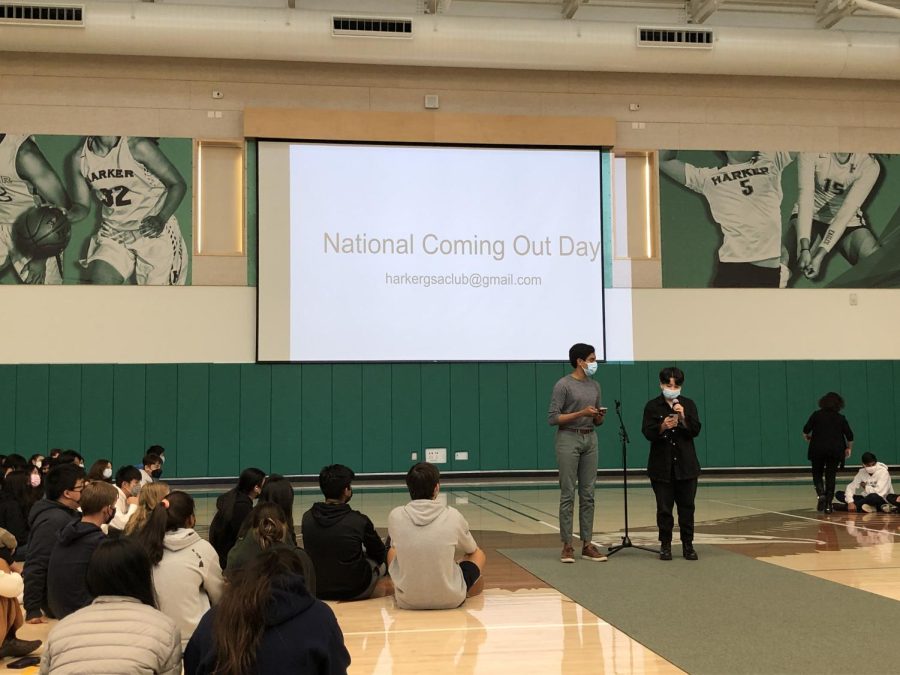 Gender and Sexuality Alliance (GSA) co-presidents Aastha Mangla (11) and Aniket Singh (11) spoke about the importance of National Coming Out Day, which took place on Oct. 11. “While most people know National Coming Out Day has the duty to remind queer people of the impact of being more open about their identity, it also serves as an awareness day for allies and members of our community to learn about queer history and politics,“ Aniket said.

by Olivia Xu and Anika Maji

Aastha and Aniket spoke about the importance of National Coming Out Day, which took place on Oct. 11.

“While most people know National Coming Out Day has the duty to remind queer people of the impact of being more open about their identity, it also serves as an awareness day for allies and members of our community to learn about queer history and politics,“ Aniket said.

“Due to this experience, I realized that waiting until you feel safe and supported is crucial when deciding who to come out to,” Aastha said.

Aniket spoke about how his experience differed from Aastha’s in that he did not have the opportunity to come out to others.

“I fully realize that it’s obvious based on the way that I dress, or speak, or the people I surround myself with, but I am not heterosexual,” Aniket said. “One aspect of my experience that is frustrating, though, is that people feel entitled to tell me what labels I should use to define my identity. I identify as a gay demimale person, and my understanding of my sexuality and gender identity develops as I continually learn more about myself.”

“Being an ally requires not only recognizing microaggressions and accepting feedback with an open mind, but also actively incorporating inclusive habits into your day-to-day interactions,” Aastha said. “One such example is asking people for their pronouns rather than assuming based on physical appearance and holding yourself accountable if you do accidentally misgender someone.”

She encouraged students interested in learning more or joining the GSA community to attend the GSA meeting that took place yesterday at 12:45 p.m. in upper school Spanish teacher and GSA adviser Abel Olivas’s room and to email [email protected] with any questions.

Harker Eclectic Literature & Media (HELM) co-editors-in-chief Alina Yuan (12) and Reagan Ka (12) announced that this year’s theme is Renaissance, or “a revival of or renewed interest in something.” Students can submit their art and writing to tiny.cc/helmart22 and tiny.cc/helmwriting22, respectively, by Jan. 14 of next year.

Tutoring Club leaders Anishka Raina (12) and Sara Wan (11) announced that students can now sign up to tutor or be tutored by their peers through a form that will be posted on Schoology. Tutors and tutees will be paired up by subject and can coordinate to meet based on their schedules. They noted that students can earn volunteer hours through tutoring. Students with questions should email [email protected].

Girls golf took home the title of league co-championship after defeating Notre Dame-Belmont on Oct. 21 and will contend for Central Coast Section (CCS) qualification in their league tournament on Monday in Carlmont.

Girls tennis earned a 6-1 victory over Crystal Springs during their senior night on Tuesday and will compete in an individual tournament at Menlo on Monday and Tuesday.

Cross country will participate in its final meet to qualify for CCS on Tuesday. Signups for boys and girls basketball and soccer close on Tuesday.

Results for games and meets will be posted on @harkerathletics on Instagram.

The Conservatory at Harker played a promotion video for the fall play “Much Ado About Nothing,” inviting the upper school community to watch the show. Kris Estrada (11), Kai Due (12) and Anya Warrier (12) announced the showtimes. The first performance of the play took place yesterday at 7 p.m. and will be continued today and tomorrow at the same time in the Patil Theater, with a free matinee performance by the Swing Cast at 2 p.m. tomorrow. Students can purchase tickets for $8 per student and $15 per adult through Harker Pay online at our.show/muchado21.

ASB Treasurer Aaditya Gulati (12) announced that the Snack Bar will sell snacks for $1 each in the concession room outside the gym after every school meeting.

Dawson concluded the meeting by wishing everyone a Thoreauvian Thursday.