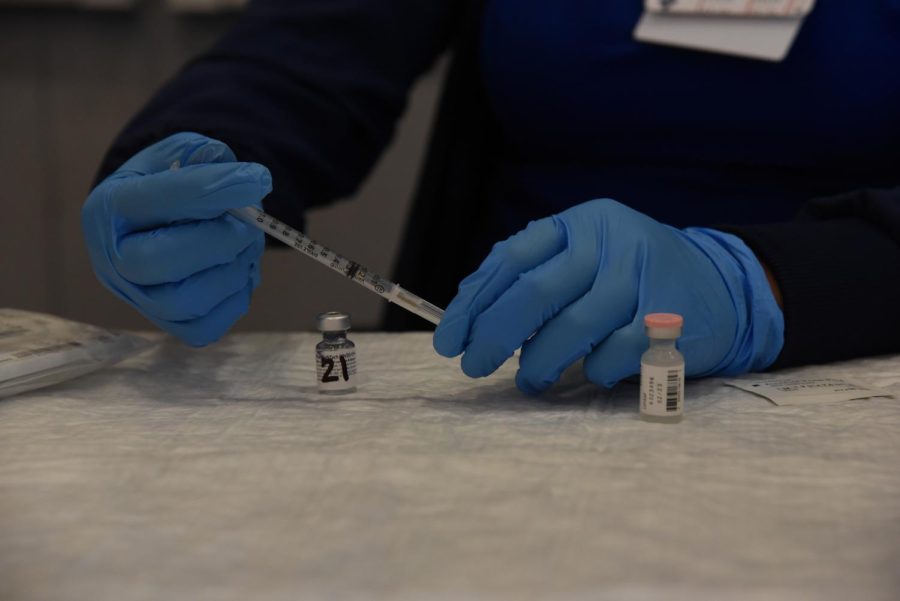 A nurse prepares a Pfizer booster shot at the San Jose Valley Medical Center on October 18. After preparation, the booster can then be administered to elderly and immunocompromised citizens.

Currently, the booster shots are only open to senior citizens, people with weakened immune systems, and essential workers like doctors and nurses. Because these individuals are at a higher risk of having severe complications if infected with COVID-19, the Food and Drug Administration (FDA) gives them priority for receiving the booster vaccines.

“The vaccine is not in short supply, but they roll out vaccines and boosters to the age groups of people most susceptible to the virus,” upper school biology teacher Dr. Thomas Artiss said. “The older you get, the less robust your immune system is – that’s why they start with people over 65.”

Due to the confirmed benefits and safety of the booster shots, Pfizer will consider allowing teens to receive them once adequate testing on younger age groups has taken place, further protecting already vaccinated teenagers from COVID-19. The FDA’s views on booster shots for teens may change as new data from clinical trials becomes available.

“I think it’s really important that the FDA proves the safety and effectiveness of the vaccine for teens as soon as possible,” sophomore Ethan Liu said. “Right now, there are so many people on the fence about the vaccine because of its potential side effects, so FDA approval of the booster shot will help a lot of people feel safer about taking it.”

Booster shots, or the third shot after the initial two doses, serve as an additional layer of protection from COVID-19 by re-strengthening the immune system when the effects of previous COVID-19 vaccines begin to fade over time. This third dose acts as a supplement to the original two doses, which 186 million people in the United States and 23.5 million people in California have already received.

“The first time that you get an antigen entering your body, your body creates B cells which create antibodies,” upper school science department chair Anita Chetty said. “The first time we get an exposure, the amount of antibodies that our bodies create is generally not that high. But if we are vaccinated an additional time, the second response is really high, so that the amount of antibodies we end up producing last much longer.”

The FDA has also confirmed all three booster shots to be safe for the vast majority of recipients, with people reporting minimal side effects such as injection site pain and headaches the day after taking the vaccine. So far, there have been no reported major or lasting side effects that come as a result of any of the booster shots.

After the approval of the Moderna and J&J booster shots, individuals are now able to get a booster shot from a different company than where they received their original two doses. The FDA does not recommend any specific combinations of vaccines and boosters, but their opinion may change when more people begin getting boosters.

“All the boosters are very close to each other [in terms of effectiveness],” Chetty said. “And I don’t think we have enough data for any of these vaccines to be able to accurately compare between them. I think they’re all working just fine.”

According to upper school biology teacher Dr. Matthew Harley, many people in struggling and developing countries are still waiting for their first dose of the COVID-19 vaccine, while the United States is already in possession of millions of booster shots for people who are already protected from the virus.

“The qualms that I have about the booster shot is more of a social equity issue,” Dr. Harley said. “We already have enough vaccines for the whole world, but it’s not getting to the rest of the world. The US and other first world countries are hoarding it, and we’re getting our third shot before other countries are getting their first two.”

Chetty also expresses her concerns over the lack of vaccines available in developing countries, especially when the United States is disposing of unused booster shots that could instead be given to other countries.

“It really saddens me that we are throwing away vaccines because people are choosing not to get vaccinated,” Chetty said. “It is their choice, but the fact that in this country, we’re actually throwing it away, when there are countries out there that still can’t get the first dose, the second dose, and forget about the booster.”