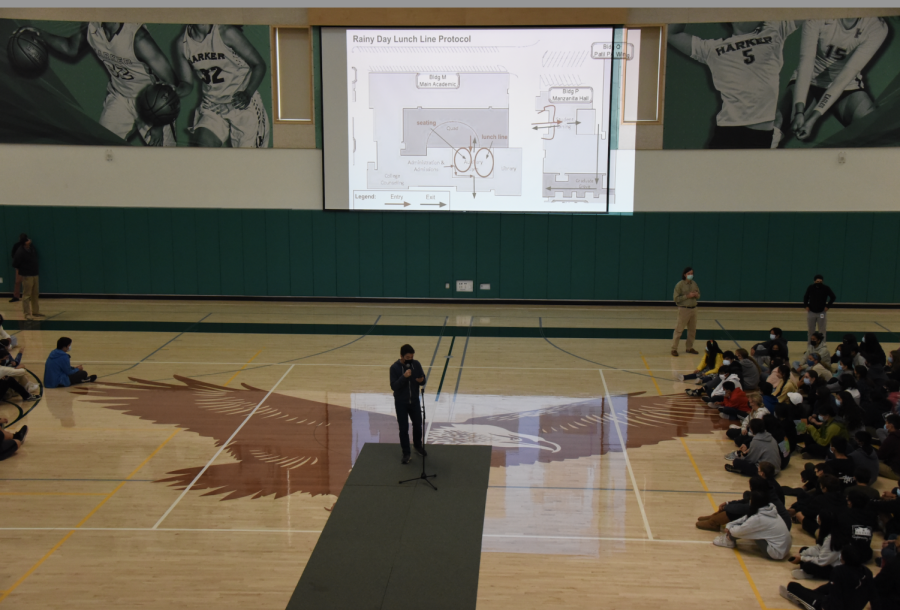 by Olivia Xu and Anika Maji

The protocol proposes to split the line to Manzanita into three entry points: the main entrance, the entrance by the deli and an entrance by the journalism room. Students and faculty can exit through the main entrance and through the back. The lunch line in the Auxiliary Gym would wrap around one half of the gym, with the other half being a dedicated seating area. To ensure lines do not become too long, a public announcement will notify the campus in advance that release times will be staggered based on buildings.

If tables in the Quad or in the orchard are wet, students can eat inside, although rainy day protocol will not be followed. Students are allowed to use the tables inside Manzanita for studying during or after school and must wear masks while inside.

Student Diversity Coalition (SDC) representatives Mir Bahri (11) and Brooklyn Cicero (12) announced their first open event, which will take place on Nov. 2 at 9:35 a.m. on Davis Field. The club also announced that they will decorate their bulletin board, located outside upper school English teacher Dr. Pauline Paskali’s room, each month to highlight a new topic related to diversity, equity and inclusion. They encouraged anyone who identifies as Native American or anyone who wants to help decorate the board for November’s Native American Heritage Month to reach out to them.

The girls tennis team played a video announcing their senior night celebrating Anishka Raina (12). Anushka Mehrotra (11) and Sara Wan (11) announced that the team will play Crystal Springs on Tuesday from 4 to 7:30 p.m. at the Blackford campus and that the commemoration ceremony would take place after the match.

Upper school physics teacher Scott Pflaumer announced that the Haunted Physics Lab, which will feature interactive physics demos, will take place on Tuesday during long lunch in Nichols 307 and 309.

The varsity girls and boys water polo teams celebrated their senior nights on Thursday at 4:15 p.m. and 6:30 p.m. respectively. All three water polo teams played against Los Altos on Thursday. The girls won 18-11 and finished their season in fourth place, and will be participating in their league tournament next week. The junior varsity boys finished their season with a 14-2 win and at least a co-league title. The varsity boys won 17-10, finishing the regular season in second place. The varsity boys team hosted a tournament at home Friday and yesterday with a game on Friday at 4:30 p.m against Leigh, which they won 22-6.

Girls tennis won 5-2 against Menlo Thursday and are league champions.

The girls golf team secured the league co-championship after falling to Castilleja Wednesday and defeating Notre Dame Belmont on Thursday and will play in the league tournament Monday.

Girls volleyball lost to Menlo on Tuesday. Volleyball hosted its senior night on Friday at 5:30 p.m.

Winged Post co-editors-in-chief Emily Tan (12) and Michelle Liu (12) and managing editor Mark Hu (12) thanked students for their response to Issue 2 of the Winged Post and encouraged students to pitch ideas and to voice questions or concerns by emailing [email protected] with the subject title “Letter to the Editor.”

Anoushka Khatri (12), Anya Warrier (12), Kris Estrada (11) and Kai Due (12) spoke about the upcoming fall play, “Much Ado About Nothing.” Performances will occur next week on Thursday, Friday and Saturday at 7 p.m.

“We hope you’ll enjoy this uplifting romantic comedy — a perfect way to laugh and relax before the long weekend,” Anya said.

Tickets cost 8 dollars for students and senior citizens and 15 dollars for adults, and students can buy tickets using Harker Pay in front of Manzanita during lunch or at our.show/muchado21. The Swing Cast, consisting of underclassmen, will give a free performance on Saturday at 2 p.m.

Jack Hsieh (11), Vincent Zhang (11), Sydney Ling (10) and Rupert Chen (11) from Philosophy Club announced that the club will host a meeting about the TV show “Squid Game” on Tuesday during the second half of long lunch in Main 17. Students interested in joining the club’s mailing list should email [email protected].

Aaditya Gulati (12) and Kris from the Campus Life committee announced the addition of four new tables and the planned addition of six more new tables by the end of next month. They also announced the reopening of the snack bar, which will sell snacks after school meetings in the Concession Room for $1 each and will accept cash only.

“It is pretty cold today, but don’t let that reflect your attitude,” Aaditya said. “Conquer today because tomorrow is Saturday.”