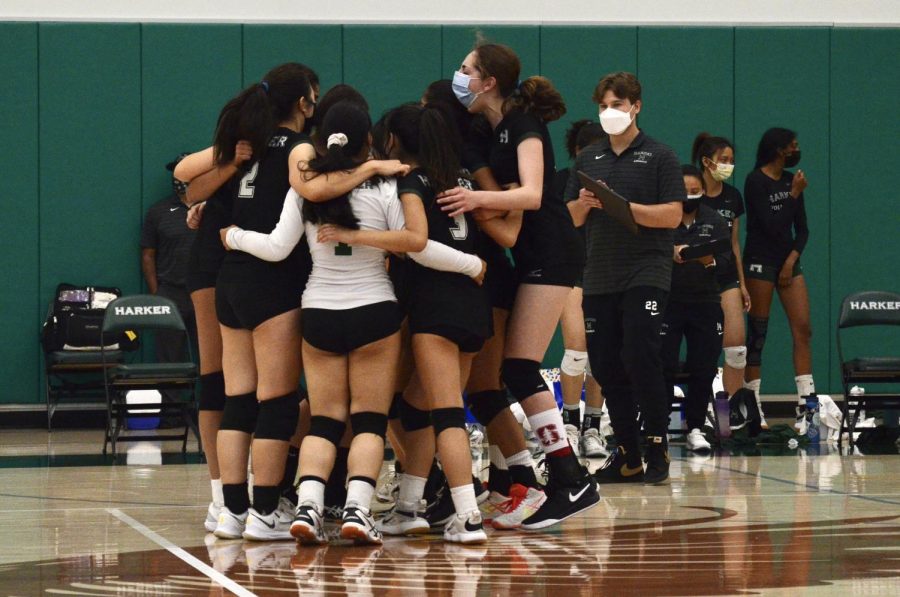 The junior varsity girls volleyball team rejoices in a huddle after their victory against Mercy High School. The Eagles won the match 25-23, 12-25, 15-10.

by Kinnera Mulam and Ella Yee

“Today’s game was probably the best game our team played and it was also one of the most fun games,” team member Carol Song (10) said. “We were able to work together as a team, and I think that’s why we won.”

The two teams were neck and neck in the first set, but the Eagles pulled ahead in the end, securing the set victory two points ahead of their opponents. This was the first time the team dominated the first set of a league game this season.

During the second set, the team pressed on, but Mercy High School ultimately prevailed. With the increasing pressure to finish the game strong, the team advanced into the match-deciding third set, in which Harker managed to regain their confidence and secure their win.

Coach Jonathan Schwartz expresses his appreciation and admiration for team captain Gwen Yang (11), who had four consecutive service aces in the last set.

During the third set, our libero, Gwen, had a run of many serves that were just ace after ace,” Schwartz said. “It was definitely a highlight right at the end.”

The victory marked an achievement only possible because of the teamwork and cooperation of every player. Gwen describes the shared feeling of joy and celebration after the game.

“When we won the third set, we all came into the center and we were all jumping,” Gwen said. “Our coaches told us that they were really proud of us and I started crying. Everyone played so well today, so I’m very proud of them.”