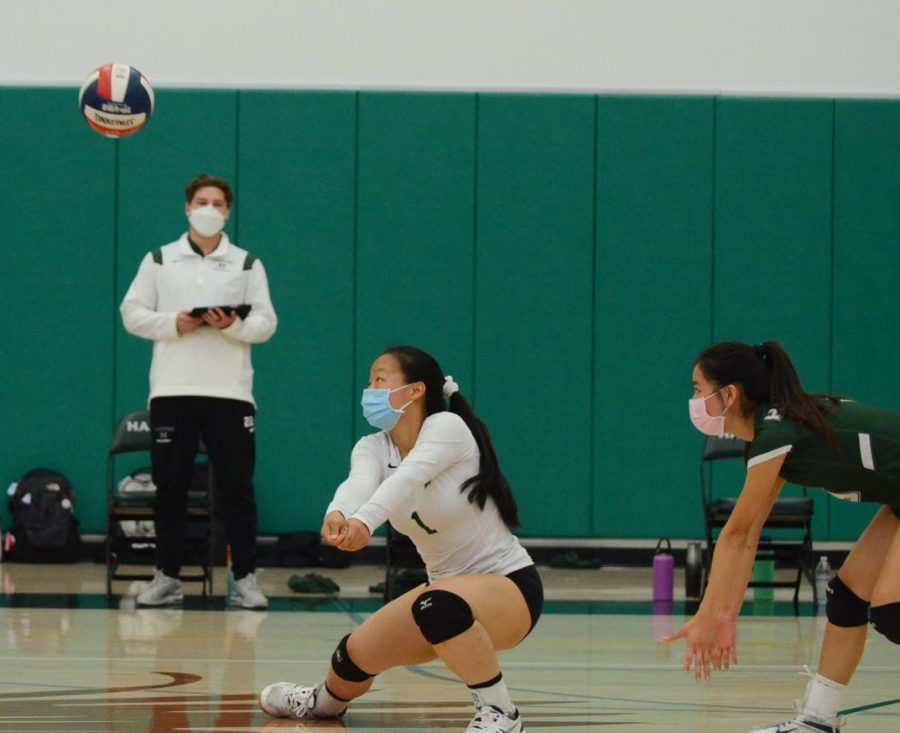 Gwen Yang (11) prepares to receive a serve. The junior varsity girls volleyball team will face Notre Dame this Tuesday at 5:00 p.m. for the last match of their season.

by Ariana Goetting and Ella Yee

The Eagles started the first set strong with a 4-1 lead but progressively fell behind and ended the set with 10 points less than Menlo. In the second set, the Eagles once again scored the first point, but Menlo soon caught up and ultimately secured the victory.

Coach Jonathan Schwartz noted how the players dominated the beginning of the match and demonstrated growth throughout the game despite the loss.

“It started off really well,” Schwartz said. “We had a ton of perfect passes, and looking back, they’ve all improved tremendously with their passing.”

Team member Alice Tao (10) agreed that the team has made great progress since the start of the season.

“With these very competitive teams, it comes down to stuff like mistakes and hitters,” Alice said. “That’s something that we have to work on, but in the end, I do feel like we’re getting better [as a team].”

Despite the defeat, the Eagles still had fun and cheered each other on throughout the game.

“We had fun,” team member Ava Arasan (11) said. “We are motivated to get the win next time. We’re here to push it forward and keep improving.”

Schwartz believes that team practices will play a crucial role in the team’s improvement as they look to secure victories in their next matches.

“We’re gonna keep working on serving and passing just because no matter what level, that’s going to be tremendously important,” Schwartz said. “And we’re going to keep working on attacking and getting our offense running.”