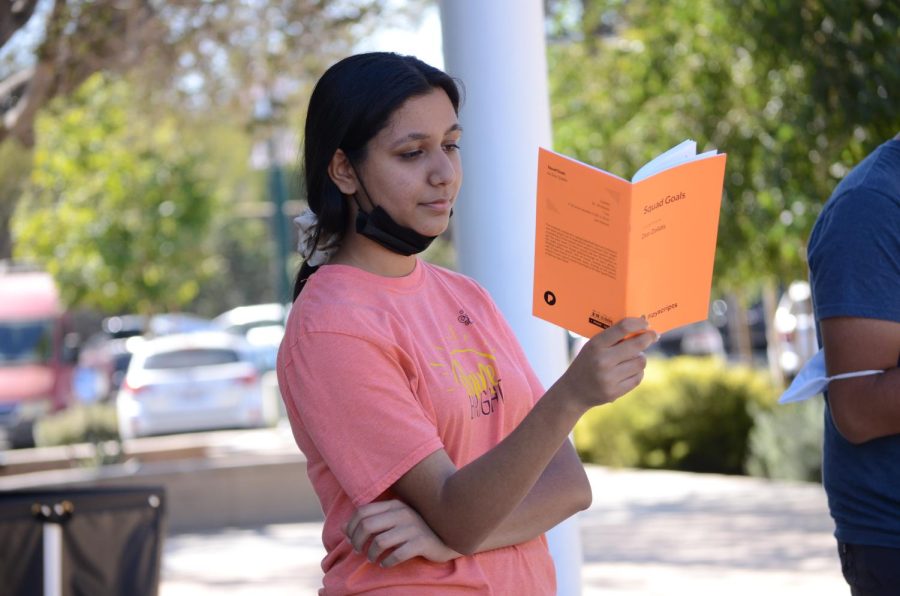 Saumi Mehta (12), one of the four senior directors, participates in a staged reading of the play "Squad Goals" on Oct. 1. The student directors posted the cast lists for all the plays on Saturday.

The Student Directed Showcase (SDS) student directors announced the cast list for the 2022 SDS productions in a Schoology post on Saturday.

Performing Arts Director Laura-Lang Ree uploaded a post on Schoology to the Harker Conservatory group with congratulatory messages and a link to cast lists for all four plays in the show. The selected plays being performed this year are “Squad Goals,” written by Don Zolidis and directed by Richie Amarillas (12); “Removing the Glove,” written by Clarence Coo and directed by Ysabel Chen (12); “The Complete History of America,” written by Adam Long, Austin Tichenor and Reed Martin and directed by Josh Field (12) and “Governing Alice,” written by C. Derby Swanson and directed by Saumi Mehta (12).

“While you may have not gotten the role you wanted or were thinking you would get, we assure you that if you go all in, this will be an amazing experience for everyone,” Lang-Ree said in the post. “As always, please make sure you treat everyone this week with the proper respect, compassion and empathy.”

Junior Lucy Feng, who will play the role of Alice in “Governing Alice,” completed the process of auditions and callback auditions, which involved performing a monologue to the four directors.

Josh Field, the senior director leading “The Complete History of America”, oversaw the auditions and helped plan callbacks and the final casting decision and is excited to be able to start working with the cast soon.

“It’s so exciting [to have the cast announced],” Josh said. “I’m really happy with my cast. I’ve got some great people. It’s fun that they finally know, and we can start building that cast culture that we like to provide in SDS and get ready for rehearsals.”

Rehearsals for the SDS plays will start around the week of Nov. 8. Auditions for the plays took place on Oct. 11 and Oct. 12 during lunch and after school, with callback auditions in the afternoon of Oct. 14. Before the cast list auditions, students had the opportunity to participate in staged readings on Oct. 1 and Oct. 5 to become more familiar with the plays and scripts.

Josh looks forward to reading through the script with the cast members and hearing their voices when rehearsals begin.

“I’m really just so excited to hear all the characters in combination, read through the entire show,” Josh said. “The shows are wonderful in text, and you can read them and hear all the character voices in your head, but once you get people reading them for you and you see their facials and their gestures and their movement, that’s when everything really starts to come together. You really get to see something magical.”