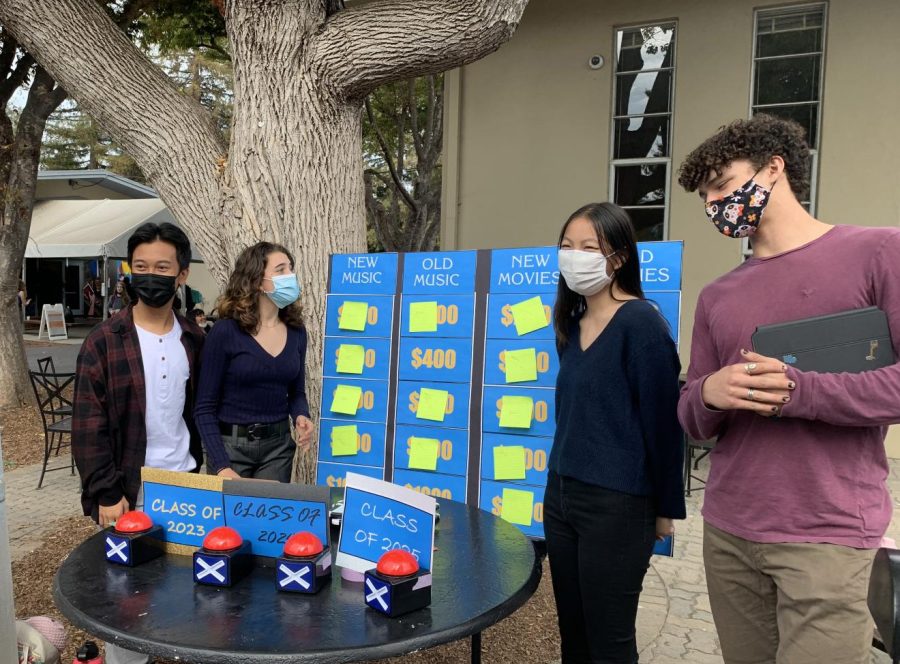 by Olivia Xu and Alena Suleiman

The Trivia Day competition was held outside Manzanita. Students and advisors from different classes could pick the theme and value of an unanswered question from a bright blue board and challenge each other to see who would buzz in with the correct answer first. The questions, which had values ranging from $200 to $1000, were split into the following subjects: old movies, old music, new music and new movies. Each category corresponded to the freshman, sophomore, junior and senior class spirit week themes, respectively.

HSLT Competitive Committee member Ashley Ma (11), who helped run the trivia game, explained that the questions focused mainly on achievements within each category.

“We mostly went through milestones like awards, so it’s easier for people to guess,” Ashley said. “It’s really nice to be able to bring spirit to people, and jeopardy is an activity that everyone knows. People got pretty excited to play, [and] it’s always nice to see people excited about something that we’ve created for them.”

The senior class is currently in the lead with 1200 points, while the juniors trail behind with 900 points. Sophomores are third with 650 points, and freshmen follow closely with 575 points, according to HSLT Competitive member Ashey Ma (11). Tomorrow, Friday, a scavenger hunt with clues scattered around campus will wrap up spirit week.

“As for my class, I think we might need to step it up a bit. Hopefully, we’ll come back in terms of dodgeball,” Ashley said. “I think jeopardy-wise the juniors and seniors definitely swept it.”

“I think people really liked [the game], and because it was so well made, I hope we will have a chance to use it again and come up with some new jeopardy questions at a school meeting or a class meeting,” Enzensperger said.

Trivia Day brought the upper school community together in a friendly competition between classes, a theme that is seen throughout this week’s spirit activities. HSLT adviser, Director of Student Organizations Eric Kallbrier recognized the community and pride aspects that come with spirit.

“When we do spirit activities like homecoming and everybody gets really excited about their class and [tries] to [represent] their class pride as much as possible, I hope we also reflect on the fact that what it is is really a celebration of our community as a whole and what makes Harker upper school such a wonderful place,” Kallbrier said.