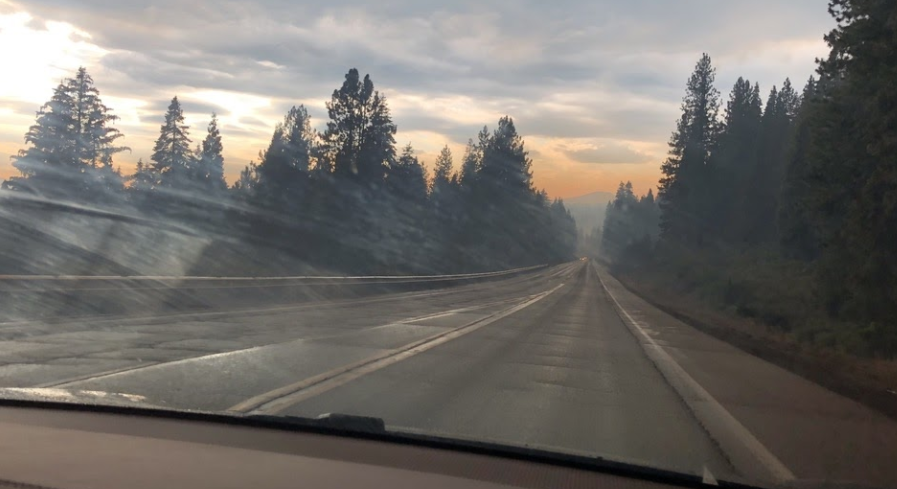 Smoke fills the sky ahead of upper school Spanish teacher and Green Team adviser Diana Moss’s car as she is about to drive past the Dixie Fire. The fire has burnt over 963,309 acres.

by Sabrina Zhu and Arely Sun

A pitch black sky surrounded upper school Spanish teacher Diana Moss as she neared the Dixie fire, while she passed through the small city of Red Bluff in ​​Tehama County. Dark smoke loomed over her car, and she felt her eyes burn and throat close. In the distance, she saw the beginning of the blaze, a “faint glow” stark against a dark sky. She was on a trip to visit family and friends and to explore a sustainable residential development in Late August. She had left San Jose and was on her way to Salem, Oregon, when she found herself forced to drive past the fire, an experience she would never forget.

Moss had driven through the largest fire of the year, the Dixie Fire, which is located in Butte, Lassen, Plumas, Shasta and Tehama counties and originated in mid July. Since then, the fire has spread across 963,309 acres, and is 94% contained at the moment. The Dixie Fire is now the largest single-source fire in California history. In addition to the Dixie Fire, there have been 7,768 other wildfires this year. In total, these wildfires have devastated over 2.4 million acres and damaged 3,050 structures. Some other major active fires are the Monument Fire in Trinity County, which has burned 223,001 acres and is 81% percent contained, and the Caldor Fire in El Dorado County, which has burned 221,775 acres and is 93% contained.