On Sept. 9, 2020, about a year ago, wildfire smoke tinted the sky above the Bay Area orange, and in the days following, air quality continuously worsened as ash fell from the clouds. In 2020 alone, 5,716 fires burned 279,885 acres as thousands of residents evacuated. One of the largest of these fires took place within the CZU Lightning Complex, which is spread between Santa Cruz and San Mateo counties, and it burned 86,509 acres and destroyed 1,490 structures. The fire was contained in about a month.

Upper school computer science department chair Dr. Eric Nelson lives in the heart of the CZU Lightning Complex, an 86,000 acre region which nearly burned to the ground last fall after being struck by thousands of lightning bolts during a severe thunderstorm. The risk of nearby fire forced him, his wife and his mother-in-law to evacuate their home for multiple weeks, but their neighborhood and house narrowly survived.

“We had an evacuation plan, and it worked,” Dr. Nelson said. “We got out of the house in two hours. You could see the individual trees going up in flames. Fortunately, we didn’t lose the house, but they got very close. Still, every time you walk outside you get ash dust kicking up under your feet.” 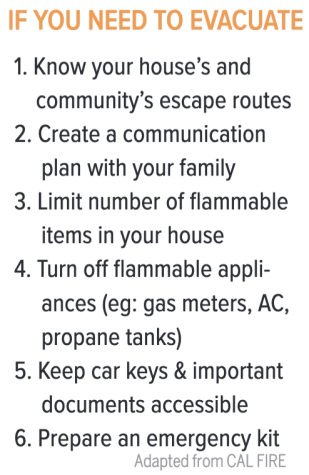 Dr. Nelson and his family ended up staying at his daughter’s home as they waited for fires to die down. He appreciates the generosity and hospitality offered by various community members to those who evacuated.

“I found the community extraordinarily supportive because we suddenly found ourselves at 11 o’clock at night on the 18th of September — we had to leave, and fortunately, we had a place to go,” he said. “I had multiple offers of places to stay, including coming from [head of school Brian] Yager. There was no shortage of support, both financial support and food service, being offered for the faculty have been displaced, which was very helpful.”

Last year, over 100,000 California residents evacuated, including Harker community members. In the midst of the wildfire season, Yager sent out an email, saying that the school would be “sensitive to the needs of our students who may have relocated” and that counselors would be available to help.