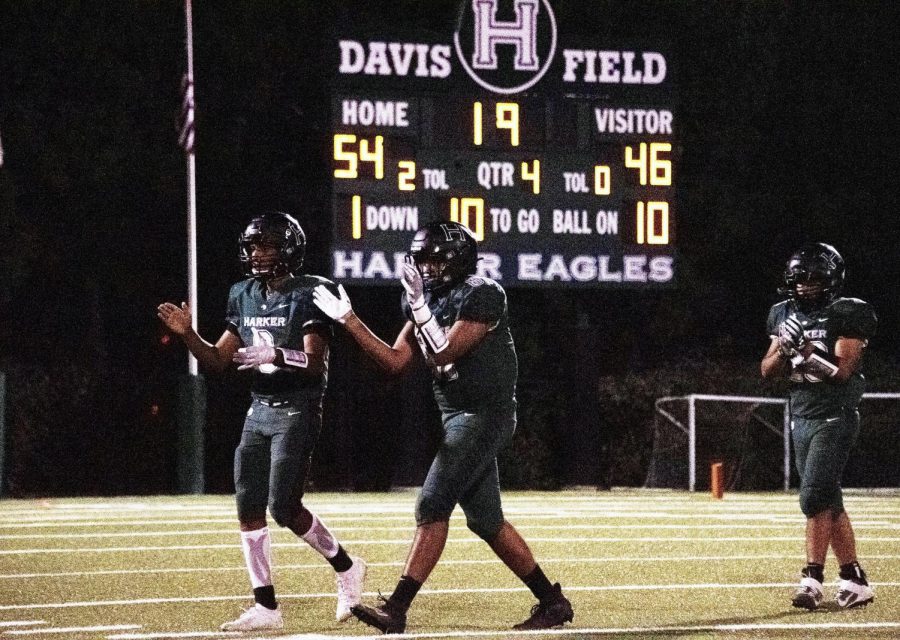 Rohan Gorti (11) and Om Tandon (10) clap to celebrate a Harker victory as they walk off the field, while the game clock winds down behind them. The Eagles won 54-46.

The varsity football team defeated Crystal Springs Uplands 54-46 at home on Thursday night to bring their season record to an even 2-2. The game was held in an 8 vs. 8 format since Crystal Springs did not have enough players to play the traditional 11 vs. 11 format.

Quarterback Rohan Gorti (11) put the Eagles on the board first late in the first quarter with a touchdown pass to wide receiver Aaditya Gulati (12). Rohan scrambled to his right, evaded a pass rusher and threw it across his body to Aaditya, who carried the ball into the endzone.

“Maddux [Carlisle (12)] and I ran the same route [on that play], and we actually hit each other [at midfield],” Aaditya said. “But I kept running, and Rohan threw me the ball, and I caught it and ran for 40 yards. The moment I crossed the touchdown line, I was screaming and my team, they were all running [towards] me, and I just felt like I was on top of the world.”

Crystal Springs responded with a touchdown of their own, tying the score at 6-6 by the end of the first quarter. But the second quarter was all Eagles. The defense shutout Crystal Springs, with interceptions by cornerbacks Adheet Ganesh (12) and Bowen Xia (9). Meanwhile, the offense put on a display of their own, with rushing touchdowns scored by Rohan, John Zeng (12) and Dylan Parikh (11). By the half, the Eagles had established a dominating 30-6 lead.

“At half-time, the defense made a couple adjustments to fix their scheme, and [the offense] made a couple changes too,” Rohan said. “We were down a couple receivers, so we had to adjust a little bit. Lots of freshmen got reps in the second half, since we were up 24 points.”

Aside from a Crystal Springs touchdown, the third quarter was relatively uneventful. But the fourth quarter was the complete opposite of that—an intense back-and-forth 15 minute period during which the two teams combined for 58 points. The mindset of the Eagles in this final period, according to Rohan, was to “chew the clock.”

“On offense, the name of the game was to chew the clock—take off as much time as possible—so we could go home with the win. There were many plays where I would walk to huddle and then take my sweet time before snapping the ball,” Rohan said.

The Eagles defense began to tire during the fourth quarter, and Crystal Springs put up points at a rapid pace. The Eagles offense remained even-keeled, putting together three touchdown drives of their own to secure a 54-46 victory in nail-biting fashion.

Dylan, who plays running-back, scored a Harker record-setting four touchdowns during the game. Despite his own successes, he recalls John’s 59-yard-rush during the second quarter as his favorite play of the game, especially since John typically plays on the offensive and defensive line. Ultimately, Dylan credits his teammates for putting him and the other running-backs in a position to succeed.

“It was a lot of fun, but I couldn’t do it without my team,” Dylan said. “Every play, they worked hard, and our teamwork led to the end result and the success we had.”

Before this game, the Eagles had tough back to back losses to Lynbrook and Valley Christian.

“The motivation from those losses really pushed us through our game against Crystal Springs,” Aaditya said. “We used all of that motivation, that built-up anger, and really fought hard to win, and I think that showed on the field.”

The Eagles will face off next against Priory this Friday at 3:30 p.m. They look to notch another win before they return home to play Marina High School on Oct. 9 for the annual Homecoming Game.