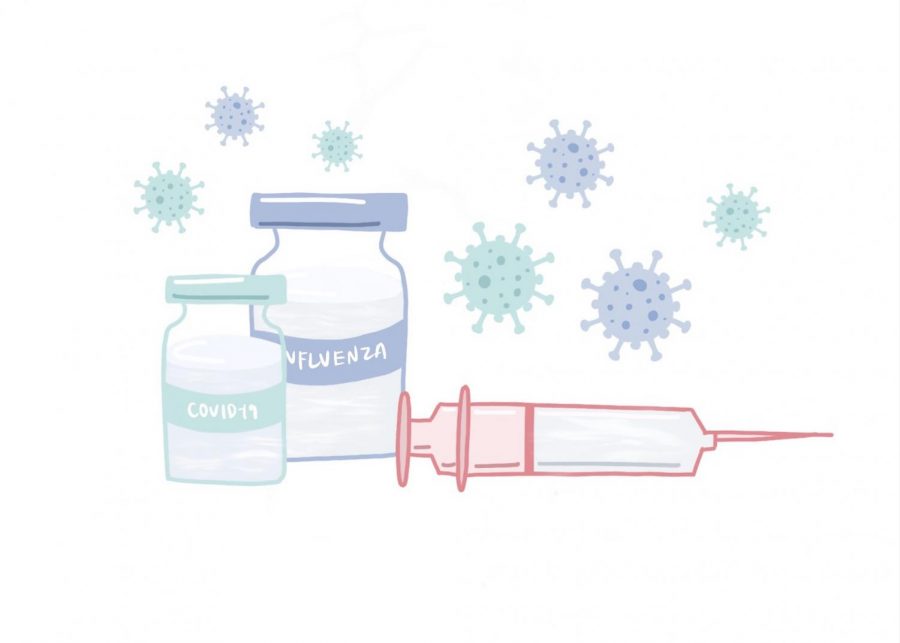 Moderna plans to begin testing for its new vaccine booster shot, which targets the coronavirus and the influenza virus, within the year. Booster shots can help protect against changing and mutating viruses.

by Emma Gao and Kinnera Mulam

Moderna announced the development of a new booster vaccine that protects against both COVID-19 and the influenza virus through a press release on Sept. 9, with testing expected to begin over the next six to 12 months.

The vaccine, also referred to as mRNA-1073, “encodes for the COVID-19 spike protein and the Flu HA glycoproteins,” which lie on the surface of influenza viruses.

“Most flu vaccines are already a [combination] of multiple strains that they’re guessing are going to be the predominant strains that year,” upper school biology teacher Dr. Matthew Harley said. “Having one of these mRNA vaccines either as is or [as a] new version along with some flu vaccines, so that we’re protected from both with a single shot, there’s no reason not to do that and to help prevent the spread of both of those illnesses.”

Data from the Center for Disease Control (CDC) shows that the Pfizer-BioNTech and Moderna mRNA vaccines administered this year remain effective in deterring severe cases of COVID-19, preventing approximately 90% of infections. The ability of these vaccines to protect against milder cases, though, wanes over time as antibodies that curb the virus diminish.

As a result, some studies have proposed booster shots. These shots will replenish antibody levels and enhance immunity against COVID-19. Only those who have already received an mRNA vaccine are permitted to receive a booster shot from the same company as their original doses after a recommended period of eight months.

Moderna, a “biotechnology company pioneering messenger RNA (mRNA) therapeutics and vaccines,” has submitted testing data about its booster candidate, a vaccine separate from the combo shot, to the Federal Food and Drug Administration (FDA) as well as the European Medicines Agency earlier this month.

“I am proud of the progress that the Moderna team has made in advancing our best-in-class mRNA pipeline while addressing the global COVID-19 pandemic,” Stéphane Bancel, Chief Executive Officer of Moderna, said in the press release. “We believe our mRNA platform can solve the world’s greatest health challenges, from diseases impacting millions, to ultra-rare diseases impacting dozens, to medicines personalized down to the individual level.”

Additionally, Pfizer awaits the FDA’s final statement on its own newly developed booster, which a consultative council to the FDA met to discuss on Friday. The council advised that only those 65 or older and severely immunocompromised individuals should receive Pfizer’s shot but opposed the implementation of a booster shot for the general population, which they did not view as necessary. The FDA will release a final decision next week, most likely in accordance with the committee’s announcement, along with a statement from the CDC next week.

“It’s good that [the booster shot] is coming from a company that administered some of the first vaccines and obviously a lot of people took their first vaccine,” Research Club vice president Sasvath Ramachandran (12) said. “They already have a level of credibility that’s important when vaccines are concerned.”

Although uncertainties abound about the approval of a booster shot, Moderna forges ahead with innovating technologies, such as a more extensive shot that includes vaccinations against respiratory syncytial viruses (RSV), which causes mild symptoms similar to the common cold but can severely affect infants and the elderly.

In the future, Moderna envisions an annual booster shot that provides updated immunizations against current COVID-19 variants and influenza strains.

“The COVID virus won’t go away. Instead, it’ll become like a common flu virus,” Public Health Club officer Fiona Yan (10) said. “It won’t affect us as much once everyone is vaccinated, and we all have that immunity. Given that this virus is going to be around for a long time, I think that the vaccine will make an impact even after COVID peters out.”

Despite the turbulence and volatilities brought by COVID-19, which caused over 4.6 million deaths, the resulting development of novel and 90% effective mRNA vaccines embodies the versatility and potential of current technology in the medical field. Harley appreciates advancements in mRNA technology that result in innovations such as Moderna’s combo vaccine.

“There’s always the chance for the next virus or bacteria to just be more deadly, more transmissible, more damage causing,” Dr. Harley said. “This is fantastic news in general for future pandemics that we can either control or wipe out much more quickly, with a lot less loss of life than we were previously susceptible to.”