Book Corner: The rise of humankind

How did humans come to be so powerful, and where is this power taking us? 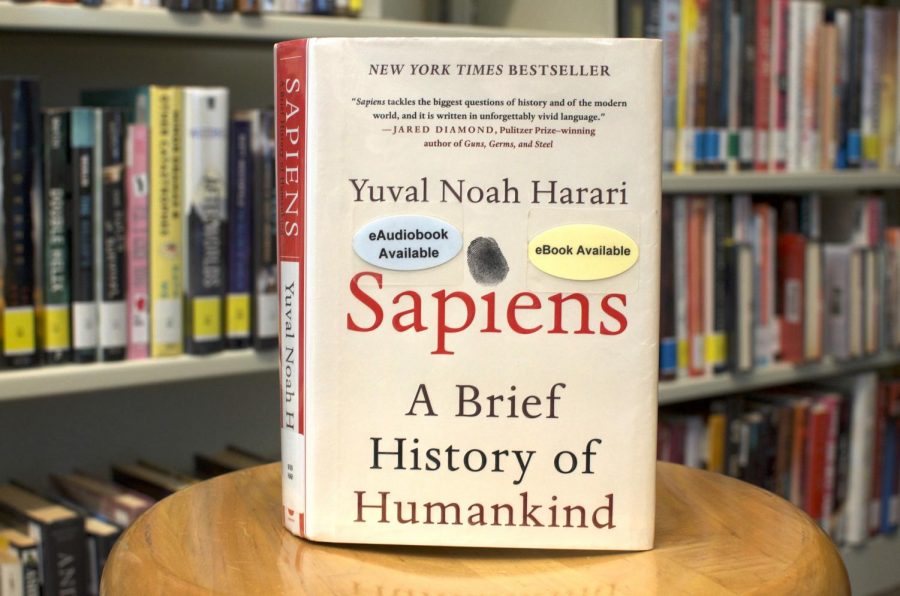 “Sapiens: A Brief History of Humankind” is a 390 page nonfiction written by Yuval Noah Harari that was first published in 2011. Harari is also the author of “Homo Deus” and “21 Lessons for the 21st Century.”

Ever wondered why your body allows you to down an entire tub of ice cream in one sitting? Or how money, the root of modern tribulations, came into existence? I never put much thought into such simple questions until I read “Sapiens: A Brief History of Humankind,” which tackles each of these questions with satisfying answers and gave me a new perspective on mundane habits and activities.

In just over 400 pages, author Yuval Noah Harari masterfully crafts the story of humankind from the advent of walking monkeys to the vast power we as a species hold today. “Sapiens” explores how ordinary mammals became the most dominant species in the world and are even beginning to rewrite nature. The novel unfolds in several stages, illustrating a series of vast changes humans have undergone such as the thousand-year-old agricultural revolution.

Despite its human-centric title, this book also explores the severe impact of our actions on the environment around us. With the domestication of animals, we humans began to see ourselves as superior beings, and with the Industrial Revolution, we began to harness any “cheap and abundant” energy available to increase productivity, oblivious to the consequences until recently.

Upon selecting the book, I did not expect to emerge from its pages enlightened, yet I ended up learning a plethora of new information I had no idea I needed to know. For example, did you know that the farming of cereals such as grain and rice was humanity’s biggest fraud? As it turns out, according to Harari in Chapter 5, wheat “domesticated” us – not the other way around – forcing us to labor long, hard hours for a food lower in nutrition than easily available forest plants. However, cereal farming allowed humans to sustain larger populations albeit with a worsened quality of life.

Beyond physical developments, Harari investigates abstract changes such as religion, how Sapiens’ social skills set us above Neanderthals and the development of currency, which was one of my main takeaways from the book. Money establishes itself on a framework of mutual trust, and this mutual trust has prompted us to accept the value of green slips of paper and even simple numbers on a screen.

The ending of “Sapiens” left me in shock: Harari lays out a series of novel scientific developments and modern technological advancements that could have immense implications for the future of science as well as society. These advancements would have seemed godlike to our ancestors as humans are beginning to rewrite the fundamentals of nature and human desire, a terrifying concept to imagine, and something that is already crafting a drastically different world. Now that humans can bioengineer organisms from their appearance to their mental state, where will technology lead us?

“The only thing we can try to do is to influence the direction scientists are taking,” Harari wrote.“But since we might soon be able to engineer our desires too, the real question facing us is not ‘What do we want to become?’, but ‘What do we want?’ Those who are not spooked by the question probably haven’t given it enough thought.”

I, who was first recommended the book by my sister, would definitely recommend this book to any student or any person in general. After reading, I saw the physical worthlessness of a flimsy dollar bill, imagined an ape devouring figs as I chomped on Oreos, pondered the meaning of science in biology class—has this happened with any other book? Harari’s incredible storytelling abilities, witty writing style and engaging anecdotes make “Sapiens” a far cry from your average dry history textbook, so don’t be turned away by its hefty length or its historical basis.

As residents of Silicon Valley, the home of several forerunning tech companies, we must recognize the potentially ominous outcomes of unlimited, unethical scientific advancements as well as the importance of equity in this new progress. ”Sapiens” evaluates social issues that continue to play a large role in today’s world and uses biological reasoning as proof for equality. Harari debunks racism, homophobia and other forms of discrimination with sounding proof, making “Sapiens” effective not only for learning facts but also real-world education we can apply to improve our futures.