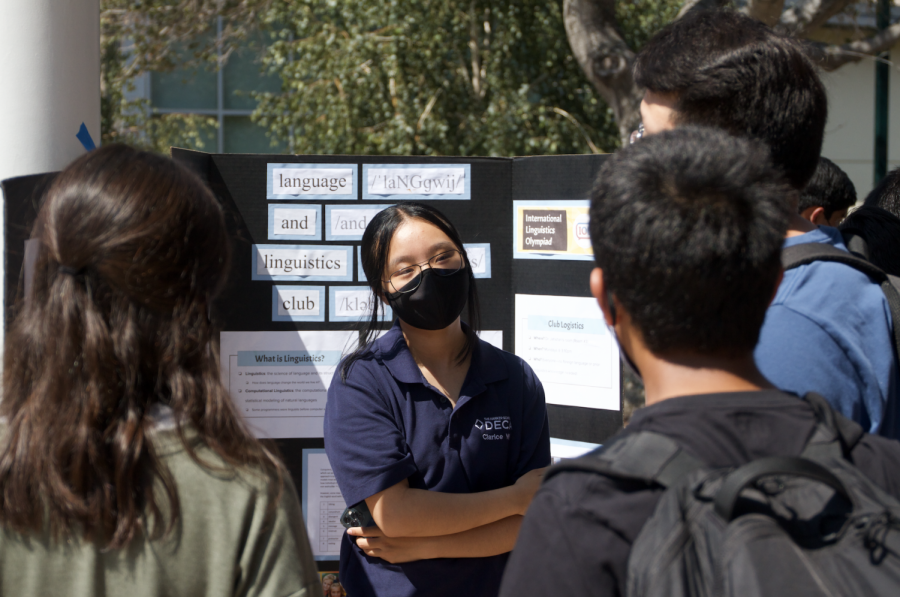 Language and Linguistics Club President Clarice Wang (12) introduces the club to prospective members. While most juniors and seniors were familiar with the format and structure of Club Fair from their underclassmen years, both freshmen and sophomores experienced the fair in person for the first time.

The annual Club Fair, which took place during the long lunch period on Wednesday, allowed students to connect with their passions by visiting club booths located at the donor plaza and RPAC lobby and signing up for those that piqued their interest.

After almost a year and a half of virtual learning, Director of Student Organizations Eric Kallbrier noticed the overall excitement and positive energy that students brought to the event.

“[I enjoyed] the enthusiasm that club leaders brought to their booths, the creativity with how they presented their clubs and programs, and then just the engagement and excitement from potential members as they perused the different offerings,” Kallbrier said.

Since upper school students found it difficult to bond with fellow club members over Zoom last year, club officers made it a priority to emphasize face-to-face interactions and communication with prospective club members at the fair.

“Last year, it was completely video editing and it was hard to mimic that human interaction,” Multicultural Club officer Andrea Thia (12) said. “This year, we worked together to put together a board, provide food and really interact with people who have questions and were actually interested.”

Beginning in 1999, Club Fair has become an established annual tradition at Harker where students can simultaneously eat their lunch and peruse the various club booths. While most juniors and seniors were familiar with the format and structure of Club Fair from their underclassmen years, both freshmen and sophomores experienced the fair in person for the first time. Freshman Harris Miller was especially surprised at the level of engagement that club officers displayed to students who were examining their booths.

“I was expecting the trifolds. I was expecting it to be a huge open area where you can walk around,” Harris said. “But I wasn’t expecting everybody to be there introducing things and being very kind. The clubs are all their own creations, [and] that’s really cool [that] they want to share that.”

Although she generally appreciated the in-person aspect of Club Fair this year, Writer’s Advocate Club officer Sydney Ling (10) noticed that advertising for her booth was difficult amongst the noise and bustle during the lunch period.

“[The biggest challenge] was marketing, like figuring out how to attract members, get sign-ups and have people come to your booth,” she said.

This year, 76 organizations had booths at Club Fair, including newly formed ones such as Music Creation Club and Biodiversity Club. According to Kallbrier, due to the growing number of organizations, it was logistically challenging to ensure that each organization had space for their respective booths. In preparation for the event, he worked with the facilities staff to arrange tables as well as additional items for every club booth.

Despite the difficulties of coordinating with both student leaders and the facilities team, Kallbrier noted the ultimate rewards of hosting Club Fair.

“[The challenges are] far outweighed by the value, which is about developing relationships and building a community, and I think that’s so important to every high school experience and beyond,” Kallbrier said. “When you join a club and you share [a part] of yourself. That’s when you find the people who share your passions.”

On Friday, Kallbrier sent an email with the Club Fair recap video and club registration form, and organizations began to plan their first meetings with new members. Clubs such as Green Team and Model UN plan to meet as early as next week.

Students are looking forward to coming together with fellow club members when meetings start to be held in the coming weeks. Sophomore Matthew Goetting expressed his excitement to spend time with classmates who share similar interests.

“I joined the Chess Club, Aerospace Club, Psychology Club and Maker’s Club, and I’m excited to learn a lot about these various topics,” Matthew said. “I don’t know too much about Aerospace or Maker’s club, but I’m looking forward to learning about new fields of interests, encountering new communities that I haven’t really talked to before and making new friends.”