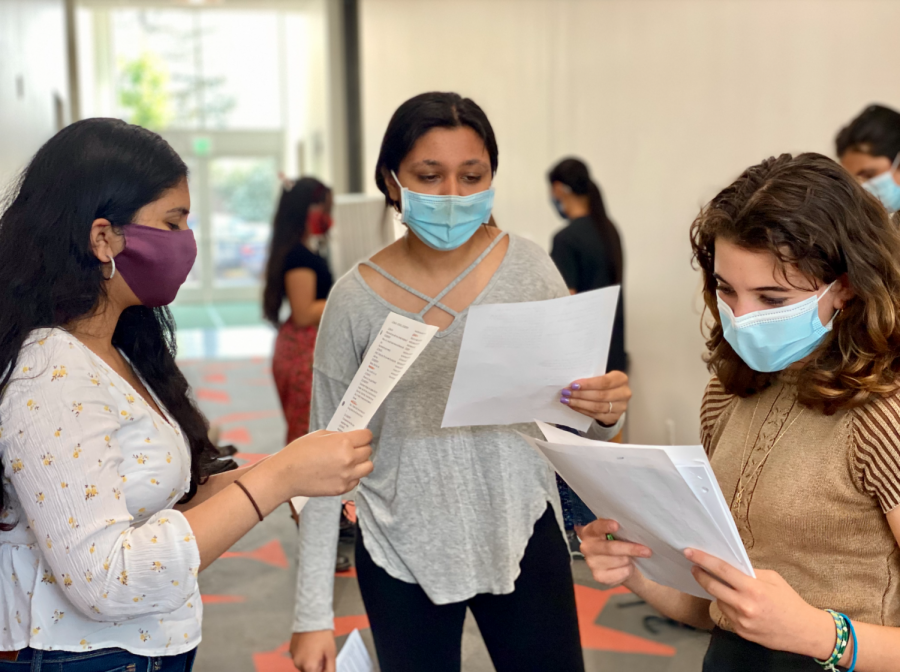 Namrata Karra (11), Saumi Mehta (12) and Paulina Gicqueau (11) rehearse lines during the callback auditions on Thursday, Sept. 2. The Fall Play this year, "Much Ado About Nothing," will be performed on Oct. 30 and 31.

by Smrithi Sambamurthy and Emma Gao

On the afternoons of Aug. 31 and Sept. 1, dozens of students entered the Rothschild Performing Arts Center (RPAC) to audition for a role in the Fall Play, Shakespeare’s “Much Ado About Nothing,” a witty comedy about the turbulent courtship of Hero and Claudio as well as the evolving romance between snarky Beatrice and Benedick.

After the initial auditions, callback auditions took place on Thursday afternoon, and directors released the final casts for both the lowerclassmen and upperclassmen plays by Thursday evening. “Much Ado About Nothing” will be performed on Oct. 30 and 31.

The audition process began on Aug. 26, when upper school theater teacher Jeffrey Draper held a workshop to provide information on the setting and characters of the play, review audition procedures and answer questions. Sign-ups for the auditions opened soon afterward.

During the auditions, aspiring cast members delivered monologues to demonstrate skills unique to their desired role. Afterward, they had the option of asking the directors for feedback that they could implement in future performances; Draper will direct the play with the juniors and seniors, and duo Tony and Tanna Kienitz will direct the freshmen and sophomores in the swing cast. Because there are two casts, all 38 students who auditioned returned for callbacks and will be featured in the final play. In callbacks, several actors performed a scene together to develop cast chemistry.

“[I like to see them] reaching out for the ends of where the characters are, as opposed to playing the center of the character, to really express more of the characters than they even know, to be inspired themselves to try new things in the audition that they have never done before,” Draper said. “That’s why it feels a little risky—because you’re taking risks, you’re doing things that are not prepared, but you’re just hoping for the best.”

Mariana Ryder (10) played the guitar in her audition for the role of the musician Balthasar. After the cast announcement, she will be portraying Ursula, the witty and faithful attendant of Hero, in the play. Having learned to cope with nerves before auditions, Mariana arrived on Wednesday equipped with a positive mindset.

“I go in hoping for, of course, the leading role as everyone was hoping for, but I always set myself realistically, and I remind myself: I know I’m not the best one out there, but I can be the best as long as I put the time and effort in,” Mariana said. “If it ends up not going the right way, there’s always next year, and there’s always another chance to improve.”

Because of safety concerns regarding COVID-19, this year’s play will be produced indoors in the Patil Theater and performed with masks. Since masks restrict performers’ facial expressions and speaking volume, directors have condensed the scripts for clarity and instead are encouraging broad physical movements for the comedic elements. Paulina Gicqueau (11), who participated in last year’s virtual Fall Play, shared her thoughts on returning to live theater.

“Last year, [the Fall Play] was totally on Zoom, and it was a really weird concept. So this year, it’s returning to that same theater-in-person idea,” Paulina said. “This year we will be doing it inside in masks, so it’s going to be a lot of different types of acting because you can’t see half the face.”

A blend of comedy, romance and a touch of tragedy, “Much Ado About Nothing” will evoke a diverse array of emotional responses from the audience. Set in Italy in the days after World War II, the directors have carefully chosen this setting in response to circumstances in the world today.

“I feel after COVID, or through the end of COVID, that we are looking for optimism, looking into the future, looking for joy,” Draper said. “This play is so funny—it’s so full of love, so full of human interaction. It’s hilarious but also meaningful. It’s something the audience will respond to and will help our community be entertained but also to be joyful together.”