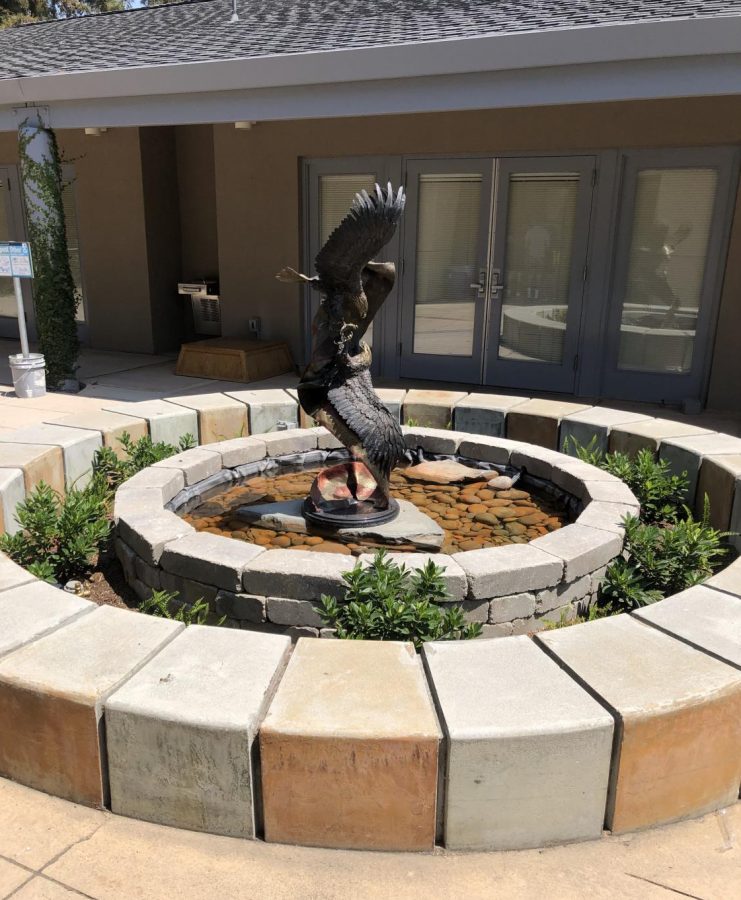 A pair of bronze eagles stand in a fountain in front of Shah Hall. The sculpture, a gift from the Class of 2021, had previously been installed in Dobbins Hall.

by Sabrina Zhu and Nicholas Wei

A pair of sparring bronze eagles grasp at a flowing American flag, suspended over a glassy pool of water. The birds of prey lock claws in the air, their talons gleaming in the sunlight. Two rings of stone surround the fountain sculpture, the outer circle alternating in blocks of white and brick red.

The fountain, which stands in front of Shah Hall, is a gift from the Class of 2021; a circle of rose bushes previously stood in its place. The recently graduated class worked with the Harker administration to envision a way to celebrate the school and bring more visual appeal to the area around the senior patio, a space that had previously not attracted as much notice.

“[The Class of 2021] attached to that fountain idea quickly because that area in front of Shah Hall is not something that’s typically celebrated in the way that we hoped it would be, so we thought that the fountain would be another feature that could bring people’s attention to that space,” Director of Alumni Relations Kristina Alaniz said.

While envisioning the fountain design, Upper School Division Head Butch Keller proposed using the eagle sculpture that had previously stood in Dobbins Hall as the fountain centerpiece. The sculpture, featuring the Harker mascot, was a gift from a former student who had created it as a gift to the school. Keller moved the sculpture so it could serve a better purpose.

“I think [the sculpture is] beautiful, and we’re the Eagles,” Keller said. “Eagles are not supposed to be cute. They’re fierce animals, and I think that captures that. [The eagle also has] the [American] flag woven in it, and my father was a vet, so the flag has always meant something special.”

Keller hopes that the eagle sculpture’s new location will bring more attention to the art piece. As students begin to return to campus, the eagle fountain serves as a new highlight and a symbol of school pride to be discovered by those traveling past the entrance of Shah Hall, walking behind the art building, or lingering around the senior patio.

“I thought it was really visually appealing,” said football co-captain John Zeng (12), who noticed the new sculpture after returning to campus for football practice. “It embodies the Harker spirit of competing. It’s two eagles fighting, but they’re both eagles at the end of the day. We might compete in the classroom or on the field, but we’re all teammates.”