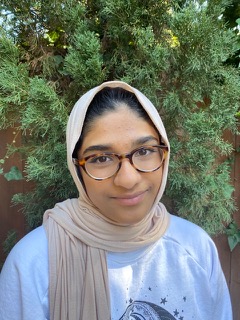 Junior Sarah Mohammed (11) was named National Student Poet in the Scholastic Art and Writing Awards. Her poetry told stories related to her own culture and background.

In late June, Sarah Mohammed (11) received the news that she was titled one of the five national student poets in the country after submitting to the 2021 Scholastic Art and Writing Awards poetry category.

Sarah’s collection of five poems, including one titled “Ode to Muslim Girl”, advanced past more than 19,000 other submissions and 40 semi-finalists to win the award. While she didn’t expect to receive any titles when entering, her stories about her culture and background elicited praise and recognition from the Scholastic judging panel.

“I still can’t really believe it,” Sarah said. “Writing those poems was a lot of lonely thinking while I tried to understand and process my feelings. So finally, receiving [the award] felt like something had opened, because I get to share my poetry with other people.”

For Sarah, being selected as one out of the five national student poets in the country represents the expansion of her poetry beyond herself. The messages she expresses in her poems about family and about being Muslim in a Hindu country initally helped her find her own identity, but as she was given more opportunities to interact with the world through her language, she realised that she was helping others connect to their heritage, too.

“For a long time, when I was young, I wanted to blend in and feel like any other white girl,” Sarah said. “I eventually came to terms with the idea that I do hold this identity, and I come from these ancestors and this lineage. I started feeling less alone, too, because I knew that I came from those people.”

Following this award, Sarah plans to continue to apply for Scholastic awards again next year, but she also wishes to simply continue to write whenever possible. She describes her writing process as expanding on a general thought she has, then letting her emotions guide her pencil. She begins by putting whatever notes or thoughts she has in a notebook, and then flushing them out on her laptop.

“Part of poetry for me is just listening and thinking deeply and just looking into the world. I will continue to keep writing because it feels so important to me and [to] my understanding of myself and my identity,” Sarah said.