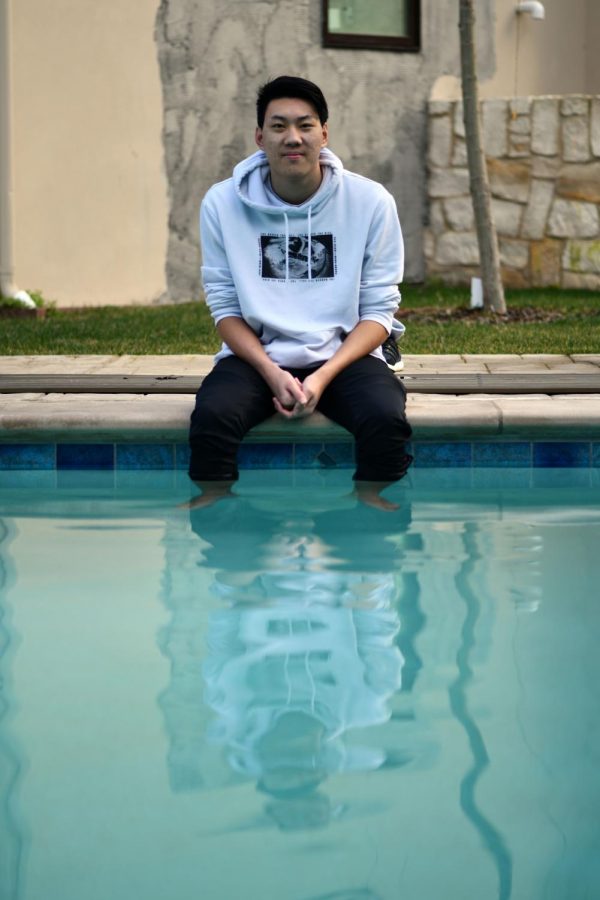 “If you work hard, and you put all your effort in, there's nothing to be stressed out about because the results are going to be there. I put that into most things that I do,” Andrew Chang ('21) said.

“Swimmers,” the announcer drawls. On the second block from the left, Andrew Chang (’21) stands confidently, stretching out the last kinks in his tall frame. “Take your mark.” Pause. “Go!” Six simultaneous spumes of water jet up. Six tapered forms glide smoothly under the surface, propelled by the momentum of the dive and pulldown. One by one, their legs fan out, and each breaststroker surfaces, pulling volumes of water as they continue to launch their bodies forward. In the lead is Andrew, his goggles glinting, droplets scattering as he cuts through the water, making the qualifying time for the 200-breaststroke event.

“You have to want to do something to be able to put all your effort into it,” Andrew Chang (’21) said.

Sure enough, Andrew is extremely dedicated to his passions such as swimming, going above and beyond to pursue them.

“[Andrew is] extremely hardworking. Whenever he finds something that he’s interested in, he tries really hard in that one specific thing. He got really into swimming over the past year, and he was doing three-hour practices every day. Every day of the week, he’d go to multiple morning [practices],” friend and fellow teammate Matthew Chung (’21) said.

Even during difficult times, Andrew always gives his best to swimming. His resilience, which stems from a spirit of determination, allows him to always keep moving forward.

“I know he has had a lot of injuries in swimming and setbacks. He’s been disappointed and gotten injured. … But then a few days later, he’s fine. He’s going at it again … and jumping back into it,” Katie Li (’21), who is also a friend of Andrew’s on the swim team, said.

Through overcoming numerous obstacles such as injuries, Andrew has learned many lessons he applies to himself such as how stressing too much is detrimental.

“What I found was, if I didn’t stress over it too much, it’s easier to perform better,” Andrew said.

Andrew’s combination of hard work and relaxed demeanor contribute to all of his work. His effort gives him the foundation and confidence to excel while his tendency not to stress allows him to stay calm and always perform his best. Matthew recalls a specific swim meet in February where Andrew’s hard work paid off.

“It was the first time he got a really good cut in swimming, and I remember he practiced so much leading up to that meet in February, so much. He was super committed,” Matthew said.

Not only is Andrew dedicated to reaching his goals and relentless in his pursuit, but he is also kind and self-aware, always willing to better himself.

“When I have given him any sort of constructive criticism, he is present and he hears it and he internalizes it and he acts on it. That’s the definition of authenticity … The ease with which he internalizes that has been pretty special,” Andrew’s adviser Liz Brumbaugh said.

In addition to swimming, Andrew is also part of the Japanese National Honor Society (JNHS), where he uses his knowledge in the Japanese language to tutor others.

“It’s pretty nice to help someone when they don’t really understand Japanese or help them with anything,” Andrew said.

Andrew’s selfless mindset, as well as his fun and easy-going personality brings lightheartedness and positivity to the people around him.

“He’s goofy and he’s fun … so he brings people along with him, which I think is a positive quality,” Brumbaugh said. “He’s easy to be around.”

Additionally, his unique sense of humor has helped him build friendships with others.

“He was funny in his own way, but he wasn’t really trying to be. He was naturally a ‘Oh, haha, you’re funny’ person. And then he would be like, ‘What? I didn’t say anything.’ And then you would look at him and you’d be like, ‘Oh, good joke.’ And he’d be like, ‘Oh, what did I say?’” Katie said.

Through swimming, Andrew has not only branched out more and built strong friendships with other swimmers, but he has also become more confident in himself.

“When he gets passionate about something, or is good at something, [his] awkwardness goes away. And then you can tell that he’s able to be a little more confident in himself,” Katie said.

Over time, Andrew’s confidence and sense of identity has grown as he has discovered his own passions to be interested independent of other people.

“His sense of self, or self identity has improved a lot. He’s found who he is more … as he grew … he found his own things to pursue and be passionate about,” Katie said.

Whether it be swimming or Japanese or anything else, Andrew’s hard work and determination has allowed him to excel at and enjoy everything he does.

“If you work hard, and you put all your effort in, there’s nothing to be stressed out about because the results are going to be there. I put that into most things that I do,” Andrew said.