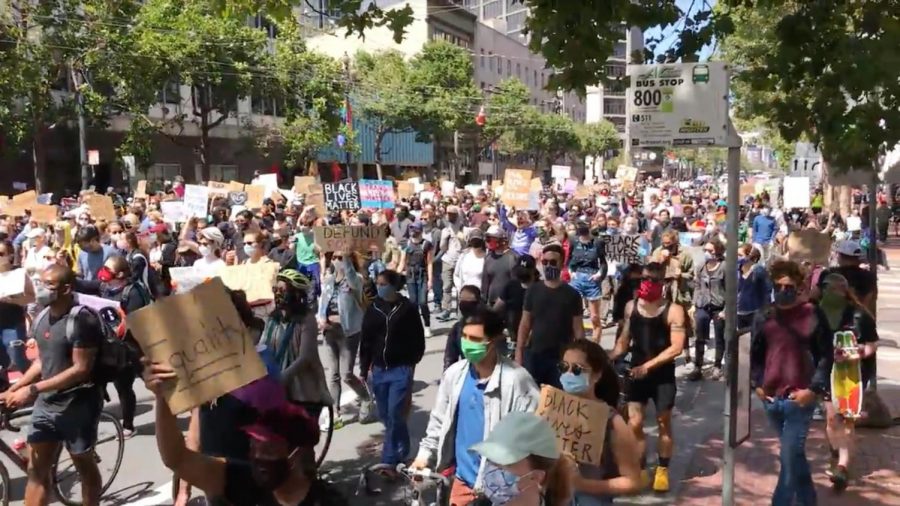 Marchers attend a rally in San Francisco on June 19, 2020, to commemorate Black history and advocate for investment in education. Last Wednesday, the passage of the Juneteenth National Independence Day Act established June 19 as a federal holiday.

by Sabrina Zhu and Arjun Barrett

Juneteenth celebrations were in full force Saturday following the passage of the Juneteenth National Independence Day Act last Thursday, which officially established June 19 as a federal holiday. The Senate unanimously passed the bill on June 15, and the House approved it with bipartisan support last Wednesday. On federal holidays, federal employees receive paid leave as most government offices, businesses and schools close for the day.

Black communities across America celebrated this year’s Juneteenth with food festivals, marches, ceremonial dances and educational readings of African American literature. Santa Clara County held their 40th annual Juneteenth in the Park Festival at the Santa Clara County Fairgrounds, and events were held in the prior week with sessions from local Black artists and entrepreneurs.

Juneteenth commemorates the nationwide enforcement of the Emancipation Proclamation, an executive order that ensured the freedom of all enslaved people in Confederate states. Although President Abraham Lincoln issued the Emancipation Proclamation on Jan. 1, 1963, its enforcement depended upon the presence of Union forces in Confederate states. A Union army general announced General Order Number 3 in Texas, which immediately freed all slaves in the last remaining Confederate state. Six months later, the ratification of the 13th amendment would officially end slavery across all U.S. territories.

“Juneteenth marks both a long, hard night of slavery, of subjugation, and a promise of a brighter morning to come. This is a day of profound weight and profound power,” Biden said last Thursday in the White House before signing the bill.

Although the upper school has not provided any communication to the student body about school-wide efforts to honor Juneteenth, Harker has taken steps to provide a more inclusive and supportive environment for Black students. Seminars about Black history were offered during Black History Month in February to host discussions about race, with speakers Dr. Bettina Love, founder of Abolitionist Teaching Network, and Dr. Ronald McCurdy, Director of the Justice, Equity, Diversity and Inclusion (JEDI) Committee at the University of Southern California Thornton School of Music.

A new Black Literature course will begin in the fall. Last October, Harker announced the formation of Student Diversity Coalition (SDC) along with Black and LatinX affinity groups.

“Having the new African American literature class added was great, having the social justice class is great, so I think that Harker is trying to talk more about race,” Brooklyn Cicero (11), co-leader of the Black Student Union, said. “Especially in our U.S. history class, we definitely talk about everything that has happened, not necessarily just with African American people, but tons of other races.”

The earliest celebrations for Juneteenth began in Texas churches in 1866 and spread across the South starting in the 1920s. With efforts from the Black Lives Matter protests last summer and the advocacy of activists like Opal Lee, by the end of 2020, 48 states and the District of Columbia recognized Juneteenth as a state holiday. Juneteenth is the first new federal holiday in almost 40 years.

At the signing of the act, Biden also promised to provide other legislative support for the Black community. His administration has been working to eliminate racial discrimination in housing, entrepreneurship and the education system. The American Rescue Plan, passed in March, gave $1 billion to approximately one hundred Black colleges and will give $1.6 billion more by the end of the year. Biden has also proposed an interagency planthat can combat housing discrimination. Additionally, he promised to give Black entrepreneurs more access to federal contracts.

“The promise of equality is not going to be fulfilled until we become real — it becomes real in our schools and on our Main Streets and in our neighborhoods — our healthcare system, in our justice system — so that we can fulfill the promise of America for all people,” Biden said in the White House.