Humans of Harker: A picture is worth a thousand words 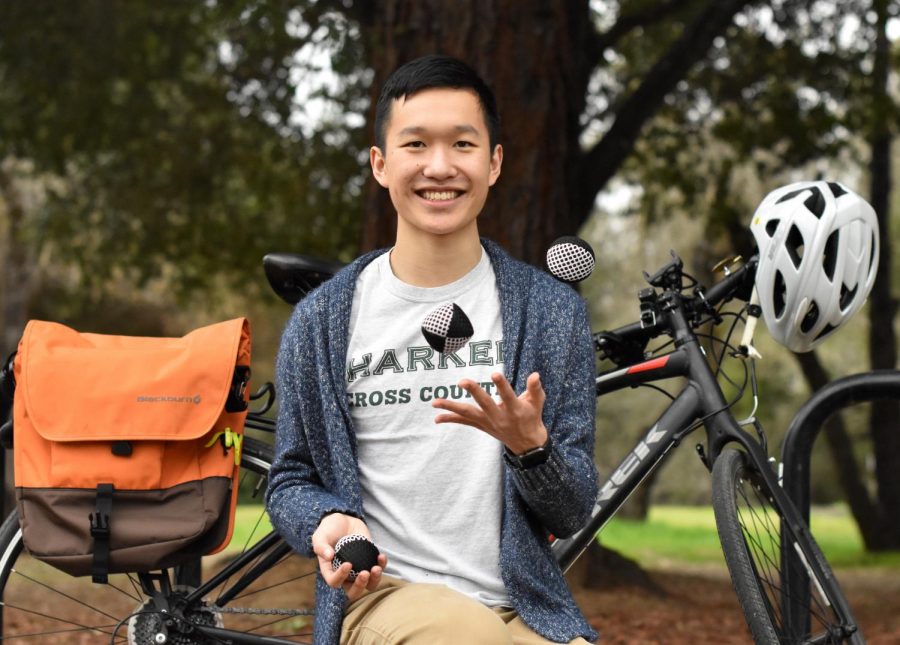 “For each 30 seconds of a documentary, I need to put in an hour of work … if I'm trying to get a message out, I could just say it. But I think putting so much effort into such a short piece of work, it's a reflection. People are more likely to look at it because they know you've put thought into it. And you're also able to be more thoughtful because it forces you to think about every single visual effect in every single word,” Jason Lin (12) said.

You may know him through his resounding proclamations in Latin. Possibly through his videography—ranging from Zuca backpack explosions to interviewing presidential candidate Andrew Yang. Or maybe his most prominent role, Associated Student Body (ASB) President. But do you know his passion for juggling? Rubik’s cubes? Pogo sticking? Jason Lin (12) is an amalgamation of each and every one of these interests.

Let’s begin with debate, an activity Jason’s been involved in since sixth grade. While his initial debates consisted of “unloading all these words on high schoolers,” both Jason’s style of debate and personal growth have evolved over the past seven years.

As a participant—and national placer—in the Congressional debate event, Jason has learned both confidence and collaboration through the time spent preparing with his peers.

“In Congressional debate, you walk into a room, there are around 20 people you don’t know. You need to then befriend them and go through nine hours of debating with them to work out agreements on bills together,” Jason said. “The ability I’ve gained to just walk into a room and get to know people and make friends with them instantly … I think it’s going to be really valuable in life.”

This propensity to make friends with whomever he meets translates into Jason’s role in student council. While Jason is most well known for his role as ASB president, his journey began as a homeroom representative of his fourth grade class. His role has grown in significance since then, but his speeches have always remained humorous.

“In my seventh grade corresponding secretary speech, I recited 70 digits of pi because I thought it would make people remember me well. And then I beatboxed at the end, and I somehow got the position,” Jason said, laughing.

But don’t let his lightheartedness fool you. Over the past nine years, Jason has implemented countless initiatives, be it class breakfast or building a Minecraft replica of Harker. Through each proposal, Jason recognized that the most important quality is to be earnest.

“At the end of the day, you’re just supposed to be representing your classmates. So instead of sending out a form during a class meeting for suggestions, what you should be doing is listening to people … Since we have such a great class, and such a great student body, people are receptive to earnest people—it makes it a lot more fun for everyone,” Jason said.

Student council is also where Jason found his love for videography. Knowing that students often had a difficult time staying focused during middle school Monday meetings, Jason strove to find an engaging way to not only keep their attention, but also convey the necessary information. And where did this lead? Videos.

Jason’s videography has often taken him to places he never expected. One in particular was the documentary he created with fellow seniors Sara Yen and Amar Karoshi, titled “Cmd-Delete: Technology’s Damaging Effect on Democracy.” In the process of creating the film, which aired on C-SPAN, Jason interviewed Andrew Yang and board chair and founder of Californians for Consumer Privacy, Alastair MacTaggart.

“It was so fulfilling to work on something with friends that I had started myself and wasn’t part of a class. And it was so incredible to work with Amar and Sara,” Jason said. “I had never conducted an interview before, but Sara had, so I learned from her and picked it up on the fly.”

Amar, who’s known Jason since third grade, has helped him with his journey through videography from those first student council videos to the documentary.

“Jason’s humor has stayed the same—before, we used to meme all the time, and now we try our best not to meme every time,” Amar said, laughing. “He’s grown this sense of professionalism … he’s focused on cinematography more since then which has added a whole new dimension to our videos.”

Not only has filmmaking forced Jason out of his comfort zone, it has also taught him the importance of the saying “a picture is worth a thousand words.”

“For each 30 seconds of a documentary, I need to put in an hour of work … if I’m trying to get a message out, I could just say it. But I think putting so much effort into such a short piece of work, it’s a reflection. People are more likely to look at it because they know you’ve put thought into it. And you’re also able to be more thoughtful because it forces you to think about every single visual effect in every single word,” Jason said.

Along with his interests in student council and film, Jason is also heavily invested in the world of technology. Through co-founding the Ethics in Technology club and engaging in discussion forums, Jason has grown to recognize technology’s impact on society.

“When I was a kid, I would design fictional robots in my spare time—I imagined that one of them could do my homework. Another one could print money. Through ethics in tech, I’ve seen the course of history and how technology has not really benefited a lot of people. Now, I don’t just take technology as a blank check. I wonder how it’s actually going to affect the world,” Jason said.

Latin and history teacher Clifford Hull, who has known Jason since freshman year, applauds his astute observations of the world and fondly commemorates the book-exchange that they embarked upon over the course of four years.

“Even after his freshman year, Jason still stayed in touch with me. He asked me for recommendations of books I’d read, and he’d come back and tell me that he couldn’t put it down. And he’d also reciprocate, and I’d read the books he told me to,” Hull said. “Jason is an amazing, amazing person, and he really knows what he wants to do. It’s good every now and then to stop and smell the roses and appreciate what you’ve got … and I really do think that Jason does that.”

Jason revels in these smaller parts of life. From hula hooping to juggling, Jason hopes that the hobbies he’s picked up make him a “cool uncle” when he’s older.

“When you learn a field or a hobby, it adds a different dimension to life. For example, if I see three oranges on a table, I’m going to juggle them,” Jason said. “If you have all these different hobbies, they’re just all these different angles to life, and you’re going to have a lot more fun.”

Jason’s sister, Millie Lin (‘18), offers an explanation on Jason’s fascination with his hobbies.

“Jason’s been so self-driven ever since elementary and middle school. He’s always had so many people who believe in him, which is why I think he’s been so driven by his hobbies. He’s accumulated all of these random interests that add to his personality,” Millie said. “It’s been so cool to see his growth through high school.”

Close friend Helen Li (12) agrees with this sentiment, stressing that there is so much more to Jason than what meets the eye.

“People need to know that Jason is much more than all his titles and accomplishments that he has garnered over the years,” Helen said. “He’ll text me about teaching him how to moonwalk, and he’s a massive ping-pong master. Jason is such an open-minded person and because of that, he’s so great to work with—he imbues a sense of family on a team.”