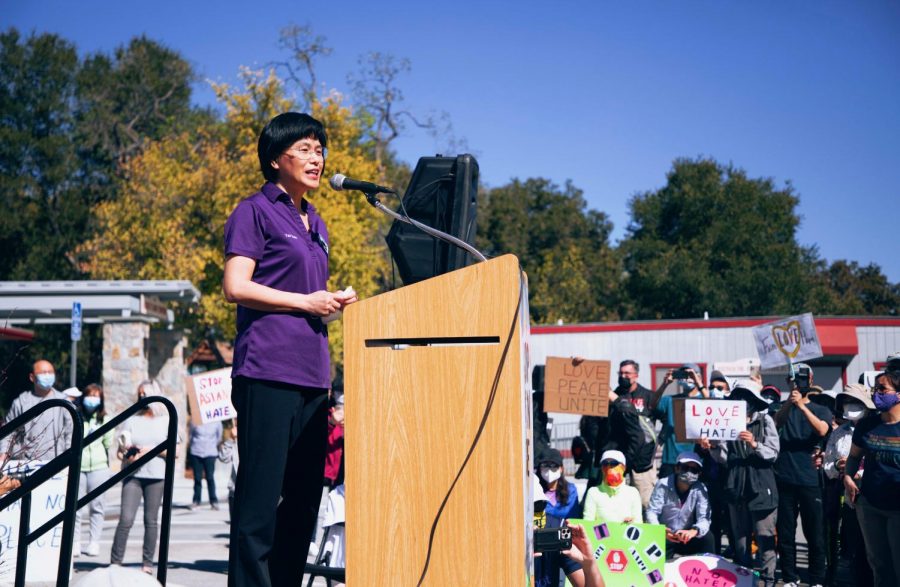 Mayor Yan Zhao shares her own experiences with racism at the West Valley Stop Asian Hate Rally on March 27. "Today, unfortunately, we have to come together to fight for one basic human right: that is we can go to public places without the fear of being attacked or assaulted," she said in her address.

A sprawling crowd speckled with bold posters before her at Saratoga City Hall, Saratoga Mayor Yan Zhao stepped up to the podium and began her speech on March 27.

“America is a place with diversity, a melting pot with many ethnicities, a country where human rights are highly valued and protected,” she said in her address. “But today, unfortunately, we have to come together to fight for one basic human right: that is we can go to public places without the fear of being attacked or assaulted.”

Following her appearance at the West Valley Stop Asian Hate rally on March 27, Zhao spoke at the Harker Public Health Club on April 16 about her insights on the local situation of the COVID-19 pandemic as a city leader as well as her political career and the challenges she faced as a Chinese American immigrant.

Beyond public health, Vice President of Communications of the club Akhilesh Chegu (11) hoped the mayor would offer insight into local violence against Asian Americans.

“We thought that Mayor Zhao would provide insight not only into issues of public health because she’s been dealing with it for about a year but also provide a lot of insight for the recent uptick in anti-Asian hate crimes,” Akhilesh said. “But even though it isn’t directly related to public health, it is something which definitely affects Harker, and since we got lucky enough to have her speak, it was definitely an important topic that we had to discuss.”

As a student at UC Berkeley, Zhao received financial support from a couple who provided scholarships to students pursuing their passions. She proceeded to pay forward their acts of gratitude by volunteering and taking on leadership roles at various local and professional organizations such as Silicon Valley Chinese Engineers Association and the Santa Clara branch of the Commission on the Status of Women. In Saratoga, she served for eight years on the city’s Planning Commission and decided she wanted to contribute more, leading her to run for City Council member three times and eventually become mayor in 2020.

At the rally and at the Harker Public Health Club, Zhao mentioned racist encounters such as when a resident slammed the door on her during her campaign for mayor, claiming that they would only vote for a white candidate.

“Some people somehow don’t treat the AAPI community as part of America — they think we are outsiders no matter if you were born here or an immigrant,“ Zhao said at the club event.

Akhilesh admires Zhao’s perseverance in her personal career as an analog devices engineer as well as her recent ventures into politics.

“[Her story] definitely shows how strong and resilient of a person she is and also shows how she overcame several barriers that she had to go through in order to get where she is now,” he said.

In response to a recent surge in hate crimes involving Asian Americans, Zhao began a series of actions for the Saratoga city council by passing a resolution denouncing violence against the AAPI (Asian American and Pacific Islander) community. To make a larger impact, she then called upon the mayors of five West Valley cities —Saratoga, Campbell, Cupertino, Los Gatos and Monte Sereno — to co-host the rally.

“That’s just the beginning of letting people hear our voices and letting them know what has been happening to Asian American communities, so I feel strongly that we need to speak up,” Zhao said in an interview after the rally. “Before, I just kept quiet because I was hoping something would be done, but something has to be starting from us — we have to do something to make it better.”

Emily Zhou (11) and her family, all of whom are of Chinese descent, attended the rally to show support for their own community after hearing about rampant hate crimes. Emily appreciated the representation of the youth perspective through speeches by high schoolers.

“I really liked how they brought out people who are within the youth generation,” Emily said. “It was really refreshing to also hear that perspective on this intergenerational kind of problem that we’ve seen. Overall, the rally was very eye-opening and inspiring.”

Despite the disparaging nationwide discrimination, Zhao emphasizes embracing her identity and participating in democracy to make Asian American voices heard.

“I’m proud to be a Chinese American, so I would never shy away trying to be something else. It’s very important to participate in all these community events to let people know we’re part of this community,” she said. “We all have to take ownership of a lot of things because this is our country.”