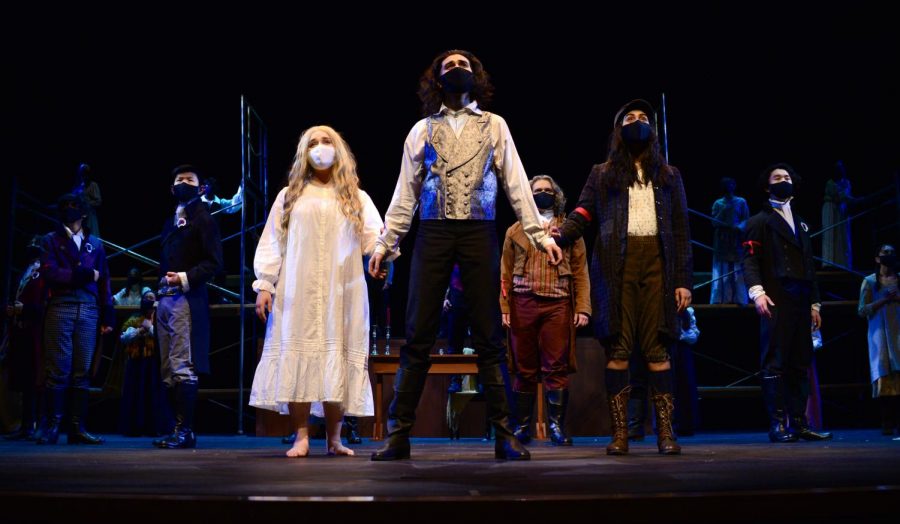 Seniors Ruya Ozveren, Alex Kumar, and Vaishnavi Murari sing in the closing scene of the spring musical "Les Misérables" with the entire cast on March 19. Unlike the format of the Fall Play and Student Directed Showcase (SDS), Performing Arts Director Laura Lang-Ree converted the musical into a movie, where multiple video angles are used and the audio is recorded beforehand.

by Aastha Mangla and Michelle Liu

As the third theater performance following the start of the pandemic, “Les Misérables” hints at hope in a time of loss and revolution. To bring this story to life, the cast and crew of the Spring Musical have been rehearsing since February to create an online adaptation of the production, which will be released on April 30th.

Unlike the format of the Fall Play and Student-Directed Showcase (SDS), Performing Arts Director Laura Lang-Ree converted the musical into a movie, where multiple video angles are used and the audio is recorded beforehand.

“We know what we can’t do as artists during this time, but we’re kind of tired of talking about that, so what can we do? Make a movie,” Lang-Ree says. “There’s no live audience and we haven’t had this experience before, but we as a group chose to take this situation positively, to make lemonade out of lemons.”

Set in 19th century France, “Les Misérables,” or “Les Miz” as the cast calls the musical, tells the story of Jean Valjean’s life after his release from a 19-year prison sentence. Although Valjean reforms his life, police inspector Javert continues to pursue him relentlessly for his former crime. Amidst the misfortunes and misery faced by the characters, “Les Miz” highlights the human compassion and strength that can emerge even in the darkest of times.

“There’s a lot of suffering in it, but there’s also a lot of hope in it, there’s love, there’s loss, there’s death, there’s a revolution and a lot of it is extremely timely,” cast member Maya Franz (12), who plays Madame Thénardier, said. “There is very much a large social uprising aspect of it and a large empowerment aspect of it. For me, watching the show, what I always leave with is this notion of fighting for tomorrow and trying to move society forward.”

While SDS was performed as a classic live production with a single wide shot recording all four shows, and the Fall Play was an innovative congregation of everyone’s recorded monologues, the Spring Musical lands in a completely different category. Months of preparation, an extended team of cameramen and producers and a cast of 36 students brought Lang-Ree’s idea of a movie to fruition.

“This group of students is the only group of students I could’ve done ‘Les Misérables’ with,” Lang-Ree said. “When you see these students, you’ll be blown away and you’ll get it. Every acting moment is absolutely their perfection. They’re the people who need to be telling this story, and it wouldn’t have been fair to them to not do it.”

Similar to Lang-Ree, the rest of the cast has taken to the new musical format with all their passion. Vaishnavi Murari (12), who plays Éponine in “Les Miz,” appreciates the new opportunities the pandemic has presented to theater and revels in the process of navigating all of the changes filming beforehand transpires.

“This year, the really special part has been the process of making a movie,” Vaishnavi said. “I don’t think many of us are used to getting multiple takes and having different cameras to play to, so that’s been really exciting to go through, such as coming to set instead of coming to the theater.”

Josh Field (11), who plays Thénardier, confirms that the musical achieves far more than the typical full-angle shot of Zoom theater. On account of the professional camera operators hired, Laura Lang-Ree’s thorough recording notes and the hours the cast spent learning and recording the music, Josh ensures that the audience will be immersed in the production.

“The audience is gonna be surprised at how put-together the musical’s going to look; it’s going to a proper movie. All of the recordings sound really good because of the time and effort we put into making sure our singing was on beat and eliminating the mistakes from our recordings, along with Ms. Lang-Ree’s effort in tying it all together,” Josh said.

The student tech crew, led by assistant directors Jasmine Lee (10) and Ysabel Chen (11), are in charge of setting up the props, ensuring everyone is present and playing the music at the proper times. Pre-recorded theatre allows more flexibility and forgiveness with making mistakes with the music and lighting, such as when the tracks accidentally switched due to a live bug on the computer.

“Since this time it’s filming instead of live theater, it’s more of you’re working on a movie set rather than doing a live theater production,” Ysabel said. “It’s different in that it’s a bit more relaxed, and there’s less pressure in that we have all the time we need to do what we want to do. Every time we refilm something, it has little tweaks in it, which is so much fun.”

Although this year’s circumstances brought drastic changes to production, these hardships have lent a deeper meaning to the play. Even in the midst of the difficulties caused by the pandemic, the cast and crew have continued to dedicate themselves to the play with a positive spirit.

“The show has a lot to do with resilience and maintaining spirit, and I think the theme of resilience translates to the mode that we’re performing with this year,” said Calais Poirson (12), who plays Fantine’s daughter Cosette. “Not only will the show make the audience think about what resilience means and what perseverance means, but also the way that we’ve been able to do the musical this year.”

The plot of “Les Misérables” itself brings to mind many of the events that have occurred in the past year. Above all, Alex Kumar (12), who plays protagonist Jean Valjean, believes that the musical will inspire audiences to reach out with compassion to their community, just as the characters in the show do.

“It’s true for anyone who ever watches this show, but I think especially this year, the main message is helping people even when you’re barely getting by,” Alex said. “The spirit of everybody’s main goal should be helping others. Even if that’s just by being kind, or you’re able to help bring other people up, I think the chief message of the show is that everybody deserves to be healthy, safe and happy.”

While the show may be set in 19th Century Paris, many of the main experiences of the show remain relevant today. The show’s timeless message will help audiences connect on a deeper level with the characters, which has allowed it to become the beloved and legendary production that it is today.

“I think a lot of what people are going to experience watching the show is where you’re going to see these characters change,” Austin Killiam (12), who plays Javert, said. “They’re going to be like, ‘I don’t care that this is supposed to take place in the 1820s in France. I still relate to this to some degree or another. I know what these people have experienced.'”

A core aspect of theater is the time spent backstage bonding with your cast and crew, sharing nervous hugs before the show begins and cheers and high-fives when the production ends. With social distancing, this provides a small challenge that is overcome simply by the extra effort put into communicating with masks and non-physically. The hugs backstage transform into thumbs-ups before the next take, and the high-fives become compliments expressed between cuts.

“Every person on stage is so supportive and always, always makes sure that everything is okay with you, that you’re having a good time and that nothing is making you feel uncomfortable,” Ruya Ozveren (12), who plays Fantine, said. “I think that that’s what I appreciate the most: the acceptance, the support within the group, not only with the staff members but also with my friends and my peers.”

Bonding in this way has led to many memorable moments where the cast is not afraid to try new acting choices from the reassurance that it can be taken again if the scene goes awry. Cast member Lucy Feng (10) recalls rehearsals as an opportunity to actively create an uplifting vibe for everyone in the room.

“In ‘Master of the House,’ we’re meant to be very jolly since we’re meeting our friends at a tavern after work,” Lucy said. “So on the day of filming, I thought I would make the people at my table actually laugh instead of having them act it out because it’s so tiring to start laughing out of nowhere. I would imitate the animals in the lyrics, so hearing them laugh at all of my impersonations was really fun and a good bonding moment.”

The musical’s soundtrack adds a complex layer of depth to the story, and the cast has embraced the emotion of the songs in their performance. Audiences can look forward to stunning musical numbers such as “I Dreamed a Dream,” “Do You Hear The People Sing?” and “One Day More.”

“One of our signature songs is ‘One Day More,’ and we have this moment on stage where we are looking up towards the sunrise of the next day,” cast member Rhiannon Sikand (9) said. “I hope that when people come out of seeing this performance, they’ll be able to think that we’ll be all together again soon. I think it’s just about looking towards the future, and I hope people will be able to look forward to that future and see that it’s there and waiting.”

As the movie’s April 30 release date rolls closer, the cast waits in anticipation as their labor is converted into a two-hour movie that leaves the audience with Laura Lang-Ree’s vision: a heartbreaking and uplifting show that everyone will recognize and love.

“A lot of blood, sweat and tears have gone into this production, and I know I can speak for everyone when I say we’re trying our hardest,” Richie Amarillas (11), who plays Enjolras, said. “It’s such a big commitment because nearly every day we have long rehearsals and filming, but I’m so proud of all my castmates and crew for putting their all into it. I know the product will turn out well.”

Harker’s performing arts department has truly embraced this year’s challenges and changes on all fronts. This spring, each performer in the dance production has continued to dedicate themselves to rehearsals, even though the show has been adapted to an online premiere format. Kinetic Krew has finished learning their show routine, and practices have begun transitioning to socially distant dancing outside the Rothschild Performing Arts Center. All of the Harker dancers participating in the production will be able to showcase their performances at the end of April when the Harker Dance Production will open virtually.