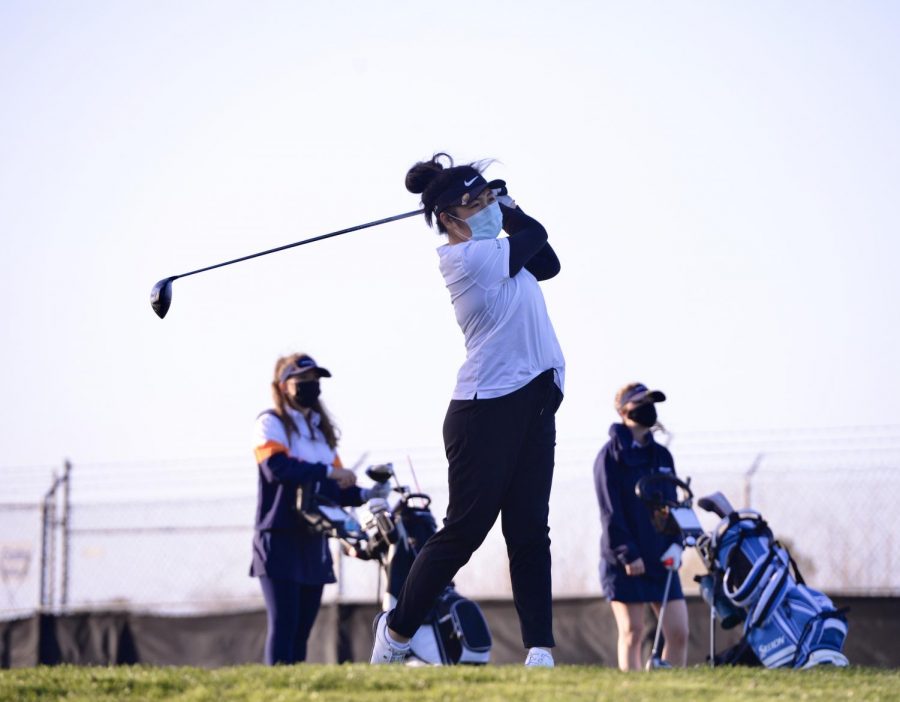 Natalie Vo (12) hits a tee shot with her driver during the girls golf team's victory against Notre Dame Belmont last Wednesday. The girls now have a record of 3-0, with three matches still left on their schedule.

As COVID-19 cases continue to decline in Santa Clara County, a majority of Harker sports have been allowed to resume practice, and in some cases, competition. Sports seasons were initially scheduled to kick off in December and early January, but were ultimately postponed due a surge in COVID-19 cases during the winter.

The cross country team maintained a hybrid format for their practices, with head coach Mia Purnell leading a small group of runners in-person, and the remaining athletes performing remote workouts using the fitness app Strava to track their runs. The cross country team participated in four meets over the course of their season, which ended on March 19.

The girls golf season began on March 22, and prior to their first match, the team practiced at a variety of courses around the Bay Area. The girls are currently 3-0 on the season, with three more matches left on their schedule.

The girls tennis season also began on March 22. They won their first four matches of the season, and in the process, snapped Menlo’s 24-year-long win streak in league play with a 4-3 victory on March 11.

“It has been really great to get back into team practices after not seeing everyone for so long,” junior Austin Wang, a member of the baseball team, said. “In terms of safety precautions, we wear masks at all times and get our temperatures scanned before practice, and then after practice, we wipe down the shared equipment that was used.”

Cindy Su (11), a member of the girls basketball team, was surprised to learn that the team would not only be having practice, but also a regular season.

“It was really surprising, because I thought we had a super slim chance of being able to practice in person, let alone have a season. Now, we’re scheduled to start practicing in a couple weeks, and our season starts at the beginning of April,” Cindy said. “Even though we won’t be able to have normal practices with contact and scrimmaging, I’m really excited just to be able to practice with my teammates and get to know the freshmen who are new to the team.”

The softball team is actively searching for additional members: those interested in participating can sign up by following the instructions in the link above. Due to a lack of members, the football and lacrosse programs were not able to form teams this year, and instead are offering skill development seasons throughout the season.