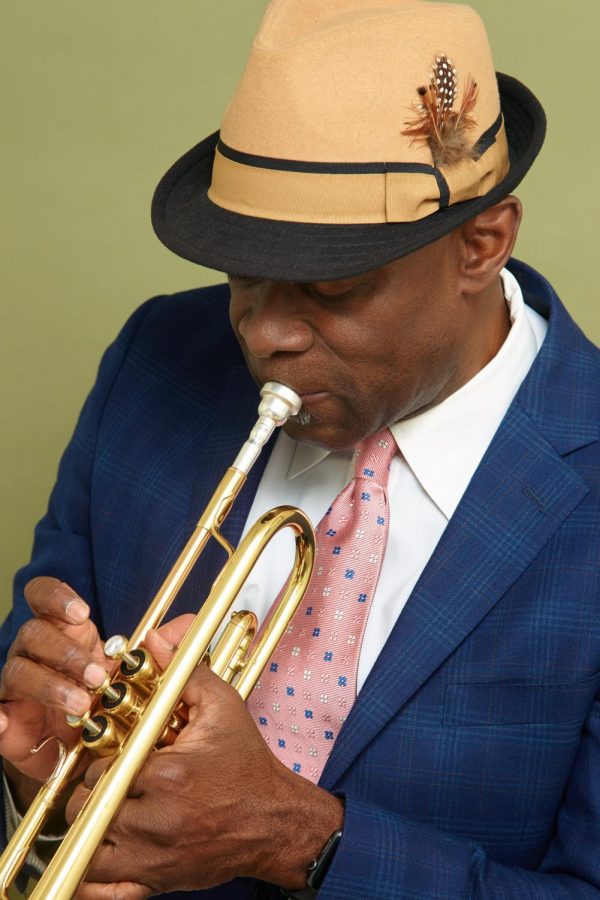 “Composition is a way of finding your artistic voice. For me, I would say, every day, when I'm walking around, I'm always hearing music in my head, I’m always hearing songs or melodies or something all the time," Dr. McCurdy said.

by Sarah Mohammed and Alysa Suleiman

At just five or six years old, a little boy would practice his harmonica, twirling around his mother’s tea party event to its lively tunes. In those moments, he knew he was destined to become someone who would one day create the music that surrounded his childhood.

Now a seasoned jazz musician, trumpeter and professor at the USC Thornton School of Music, Dr. Ron McCurdy looks back fondly at his journey in music and its intersections with humanity and activism, hoping to bring these messages to young artists and students alike.

Currently, Dr. McCurdy joins the upper school in monthly sessions — the first one took place on Jan. 26 and the second on Feb. 26. During his first visit, Dr. McCurdy discussed the Harlem Renaissance and the history of racism against Black Americans leading up to the early nineteenth century.

“Part of my mission with all these sessions is to help young people to really begin to understand what you stand for, who you are as a person and what kind of human being you are going to be as you mature into adulthood,” Dr. McCurdy said.

Dr. McCurdy’s first session focused on the prominence of Black culture in the entertainment world and its influences on jazz, dance, theater, poetry, art and intellectualism during the Harlem Renaissance, a revival of African American culture centered in the Harlem district of New York City.

“I thought it was really nice to see how he talks about how this African American culture has been influencing our cultural revolutions,” Charles Ding (11), who attended Dr. McCurdy’s first session, said. “A lot of times he just burst out singing, I thought that made the presentation a lot more fun and engaging.”

From a young age, Dr. McCurdy’s parents instilled in him the value of service, to help people realize their dreams and goals, and he was able to realize this value through teaching.

“I love the idea of giving back to young people and seeing young people grow and learn and prosper and create their own core values,” Dr. McCurdy said. “[Teaching] makes you feel like your life is worthwhile because you should be living a life of service.”

As he grew up devouring music and art, Dr. McCurdy was drawn to jazz because of how the music is soaked in African-American culture and tradition, allowing for the performer’s creativity and personal flairs to shine.

“Every time you perform [jazz] is going to be different: you may change a pitch, you may change your rhythm, you may delay a phrase, but that’s totally acceptable because of the music in that particular genre,” Dr. McCurdy said. “Any African-American derived music, whether gospel music [or] RnB, is about the performer and not the composer.”

Through composition, Dr. McCurdy hopes to put into song the melodies that are part of his voice as an artist. He first imagines the story he wants to tell and experiments with which sounds he can create to help support that story. His story builds from a palette of music theory, harmony, melody and an understanding of life around him. Dr. McCurdy especially appreciates music as the result of a blend of various backgrounds and enjoys listening to other indigenous and cultural music to deepen his perception of the musical world.

After doing a cultural mix project 10 years ago called Shanghai Jazz, he was approached by a gentleman at the Grammys, who showed him some sheet music by the Chinese composer Li Jinhui and inspired Dr. McCurdy to look deeply into Li’s music.

Li Jinhui was ostracized for his music due to opposition from the Chinese Nationalist Party. He met jazz musician and trumpet soloist Buck Clayton, who had formed a group called the gentlemen of Harlem in Shanghai. After their chance encounter, Buck Clayton began to incorporate Chinese aspects in his music, and Li Jinhui began to incorporate jazz techniques in his music, a cross-cultural exchange that served as inspiration for both artists.

Fascinated by the mutual cultural impact that Li and Clayton had on each other’s music, Dr. McCurdy decided to compose three suites of songs inspired by Li Jinhui, developing the project, “Shanghai Jazz: A Culture Mix,” with two other composers. The 10 Li Jinhui folk songs they used as inspiration, combined with Western classical music and American jazz, both harken back to times in Shanghai while making the music retain a modern feel. In one performance, Dr. McCurdy showcased this project with the 4th Stream Orchestra.

“As an artist, you don’t want to try to ever duplicate what someone’s already done, so I reimagined: ‘What if Li Jinhui and Buck Clayton were here in the 21st century?’” he said. “I took themes of Li Jinhui’s music, and I superimposed what I reimagined they might have done.”

“In his presentations, he talks about how improvisation connects with leadership and the history and a music that was inspired by improvisation,” Dr. Hart said. “He’s interested in studying this to the highest level, and then writing his own music in that style, and then improvising, and that’s my definition of a great musician.”

In the future, Dr. McCurdy hopes to release a project inspired by Louis Armstrong’s “Nobody Knows the Trouble I’ve Seen,” in which artists can use Armstrong’s piece as a communal soil to foster and create discussions around heritage and struggle.

“I want to have people of different ethnic backgrounds write about different aspects of their life but also address historical figures by starting each letter by saying, ‘Nobody knows the troubles I’ve seen’ and going in a different direction,” he said.

In connection with this idea, Dr. McCurdy hopes to remix jazz music that fits alongside these pieces of writing, creating a world that can hold multiple and myriad art forms in the same space.

Usually, he composes music correlated with a poem and then combines images with cinema to also correlate with the poem. During his tours, the final product is then shown at his concerts. Although he has been composing and playing music for a long time, Dr. McCurdy maintains his energy and drive because of his fascination and curiosity for the craft.

“I’ll learn a certain technique and realize, ‘Gosh, there are 10 more doors that need to be opened, that I haven’t even explored yet,’ he said. “And that keeps me going, and just the idea of not knowing and just having an insatiable appetite for knowledge.”

Dr. McCurdy’s second session, which took place on Feb. 26, explored the connections between jazz and leadership. He discussed how jazz embodies leadership, because it requires listening and compassion between players to create beautiful sounds. Upper school vocal teacher Susan Nace, who helped organize Dr. McCurdy’s visits, shares her belief of the inherent prejudice against women and people of color in the classical music world.

“There needs to be a change in our education system to where it’s not just about white privilege, where it’s just not Eurocentric, but where it becomes more global and inclusive and celebrates and honors,” Nace said. “Bringing in Dr. McCurdy is just one of many steps we need to take in making sure that we are truly educating our students about the world that is and the world that will be — not the world that was.”

Dr. McCurdy will be visiting the upper school at 10 a.m. tomorrow for another speaker event titled “Langston Hughes: Relevant Yesterday, Even More Relevant Today!” His book recommendations on racism and the African diaspora can be found here.