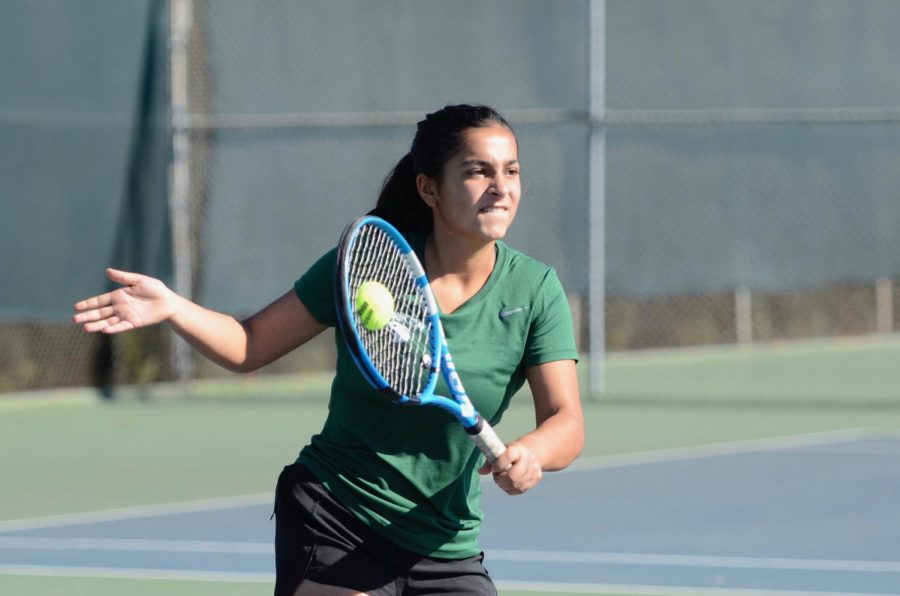 Anushka Mehrotra (10) swings at a ball during the team’s CCS semifinals’ matchup against St. Francis last school year. Girls tennis resumed three weeks ago, and since then, the team has racked up three victories, against Monta Vista, Sacred Heart, and now, Menlo.

“Menlo’s been the best team in our league for so many years now, and each year they’re the toughest school that we play. Heading into this match, we knew that it would be tough, but this year we have some really great players that joined our team, so we knew we had a chance,” said co-captain Santoshi Tirumula (12), who did not play in the match due to an injury. “We had that mindset of not going in expecting anything, but just bringing our game and playing to the best of our abilities.”

The match began at 4 p.m. and was held at the Blackford campus tennis courts. The team played four singles matches and three doubles matches. The singles players were not required to wear masks, but those playing doubles were, due to their close proximity to one another.

Santoshi, who attended the match to cheer on her teammates, believed their unrelenting spirit played a key role in their victory.

“I was walking around cheering the team on, and you could still feel that same energy and spirit, in spite of COVID, and it being hard to communicate. The spirit of our team is really unparalleled and our strongest characteristic, and I think that’s what pulled us through,” Santoshi said.

Anishka, who played doubles with Emma, appreciates being able to compete alongside her teammates again, something she has not been able to do since fall of last school year due to COVID-19.

“It was really nice to be surrounded by my teammates again and to be able to play with them,” she said. “Our team has already bonded so well during our short season and competing with them is always a positive experience.”

This victory concludes a successful week for the team, who defeated Monta Vista 4 – 3 on Monday and Sacred Heart 7 – 0 on Tuesday. The girls will face Crystal Springs next, at home at 4 p.m. on Tuesday.