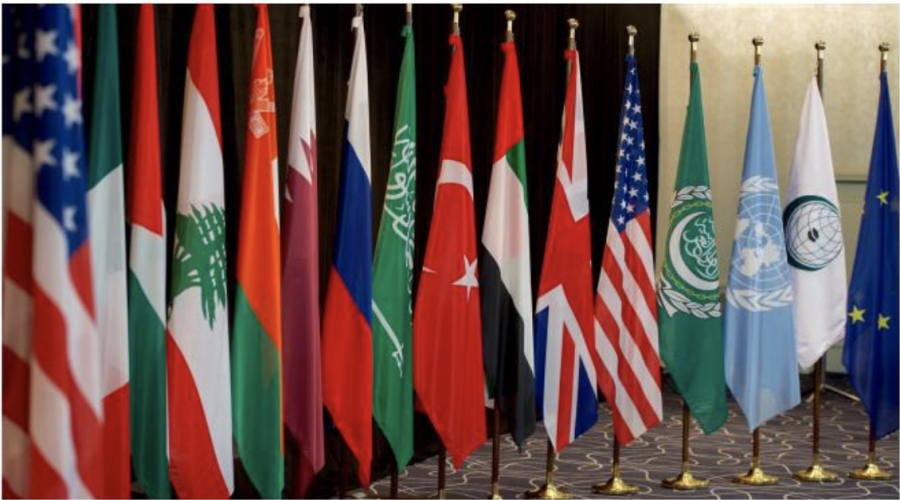 Provided by U.S. Department of State

Flags of different countries stand outside a 2016 meeting of the International Syria Support Group. “I think we can all come together and agree that Biden's vision of America is a fundamentally more optimistic one.” Youth Activism Club president Ethan Choi (12) said. “And it's one that values the impact of immigrants so much more so than [former President] Trump.”

Biden’s executive order “ending discriminatory bans on entry to the United States” fulfilled a promise he made to Muslim supporters that he announced virtually to a Muslim American advocacy organization at a livestreamed event in July. This order reversed the “Muslim-travel ban” that was issued four years ago, during former President Trump’s first week in office. Since its issuing, more than 41,000 visa requests have been denied. In addition to reversing the ban, Biden’s new order also allows federal immigration agencies to “set civil immigration enforcement policies” and calls for a review of any practices developed in regards to the 2017 executive order and can revise them as necessary.

In addition to the order regarding discriminatory bans, Biden also announced that he will send the U.S. Citizenship Act to Congress. Included in this act is the No Ban Act, which passed in the House six months ago and would prevent presidents in the future from enacting discriminatory travel bans.

Advocates are calling for the government to review all denied cases and allow requests to proceed without additional fees or interviews for people who have already gone through them. They hope this will be the beginning of a more widespread immigration revision effort that will go on to raise the refugee resettlement cap and expand the Deferred Action for Childhood Arrivals (DACA) program.

In regards to DACA, another one of Biden’s executive orders called on the secretary of homeland security to take all appropriate actions to “preserve and fortify” DACA. It is estimated that nearly 646,000 people are enrolled in DACA and 1,331,000 qualify for it, but, under the Trump administration, new applications had stopped being accepted by the government for over three years.

Besides just strengthening the program, Biden urged Congress to pass legislation that would make Dreamers eligible first for permanent residency in the U.S. and then citizenship three years later. In tandem with this, he also proposed immigrants living illegally in the U.S. to be eligible for permanent residency in five years and citizenship in eight. This has received pushback from Republican lawmakers concerned about creating a pathway to citizenship for immigrants who broke the law, which would be roughly 11 million people.

While there have been mixed reactions to Biden’s new orders, his stance on immigration ultimately reflects a different perspective of America than his predecessor.

“I think we can all come together and agree that Biden’s vision of America is a fundamentally more optimistic one.” Youth Activism Club president Ethan Choi (12) said. “And it’s one that values the impact of immigrants so much more so than [former President] Trump.”

Along with his efforts to reverse and review other policies started by the Trump administration, Biden signed an executive order establishing an interagency task force for identifying children separated from their families at the United States-Mexico border between January 20, 2017, and January 20, 2021 and facilitating their reunions with their families. The chair of this task force, Alejandro N. Mayorkas, the first Latino and the first immigrant secretary of homeland security, was sworn into office shortly after the order was signed.

Biden also rescinded the national emergency declaration that President Trump had used to divert roughly $10 billion from the Defense Department accounts toward building a wall on the border of Mexico, directing private contractors to stop work “as soon as possible but in no case later than seven days.” In the meantime, the project will be assessed fully to see if the funding is legal and if the funding can be diverted elsewhere. The proclamation issued directs federal agencies to make a plan to redirect border wall funds and “resume, modify, or terminate” segments of the structure that remain under construction. The previous administration finished 455 miles of new barriers along the Mexico boundary.

Beyond the orders regarding DACA, immigration, and the border wall Biden signed on his first day, he also signed other orders that reversed more of Trump’s policies, such as rejoining the Paris Climate Accord.

“I particularly like the fact that [Biden’s] sort of recommitting the United States to international agreements and efforts,” upper school history teacher Byron Stevens said. “And it underscores an idea of cooperation, which I think does more for United States national interest in the long run, than [a] more of ‘go it alone, America first attitude.’”