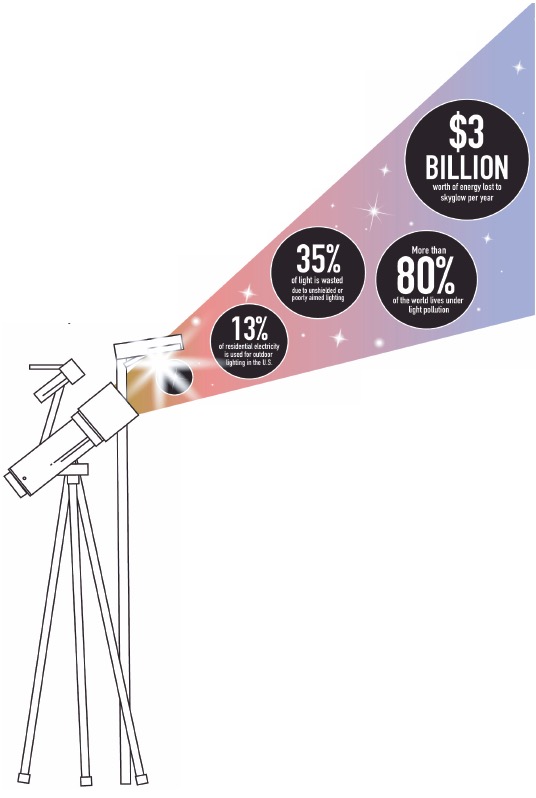 Turning off unnecessary lights at night illuminates the natural glow and beauty of the stars and galaxies visible in the night sky.

Traveling hours away from the Bay Area’s brightly lit sky to take photos of the galaxies in our universe, one finds oneself in a vast wilderness as stars twinkle above across the night sky. A swarm of satellites streak across the sky, leaving marks running across the photos. Light pollution, caused by artificial light, and sky pollution, due to the ever-increasing amount of satellites orbiting the Earth, interfere with professional astronomical research to amateur photographers attempting to study the dark skies.

In 2016, scientists determined that more than 80% of the world’s population live under light-polluted skies, as well as more than 99% of the U.S. and European population. Light pollution is an ever-increasing problem as city lights block out the dim glow that celestial objects give off.

“The job of a telescope is to collect as much light as possible, which is why scientists work on making giant mirrors and lenses. Most of what’s interesting in the night sky is really dim; it’s not producing much light compared to the background light, so you need a big bucket basically for catching all that light,” Chris Spenner, upper school physics teacher and avid astrophotographer, said. “Because those objects are very dim, the more light pollution there is in the sky at night, the harder it is to see them. Eventually, they’re just lost or washed out because there’s too much stuff bouncing around.”

Street lights and other artificial outdoor lighting play a major role in the increasing spread of pollution as well as affecting astronomers’ work. The type of light sources are of equal importance in the effects they cause on astronomers. Because different types of lamps produce varying spectrums of light, those that only emit light in a narrow wavelength are optimal for astronomers as they are able to filter out those colors to continue their research. However, those that produce light of various colors cannot simply be filtered out as they affect the entire spectrum of astronomical observation.

The Lick Observatory, situated on Mount Hamilton and about an hour drive from downtown San Jose, receives about 70% of its man-made light from San Jose. The observatory requests that cities in the Santa Clara Valley use low-pressure sodium lamps (LPS) as they emit only yellow light. However, as cities begin to shift to LED lighting, serious impact on astronomers’ work can be noticed.

Individually, to combat such effects on the night sky, efforts such as reducing or covering upward pointing light, which reflects off the Earth’s atmosphere and comes back down on the Earth, can reduce interference with upward pointed telescopes.

“I think the main way to address [the long term effects of light pollution] is to make sure that there’s a separation between city life and natural life where people conduct observations so that places like the Lick Observatory on Mount Hamilton can remain less light-polluted and be a place where stargazers and astronomers can effectively use that space,” Andrew Lu (12), co-president of Astronomy Club, said.

In addition, about $3 billion per year in energy is lost to sky glow, equaling about $10 spent per person in the United States each year. Being conscious of light usage around the house during the night can reduce these numbers.

“[We should] make sure to be conscious and proactive about reducing the amount [of light] that we’re using just like water — if you’re not using the light, it’s best to just turn it off,” Emily Zhou (11), who has conducted astronomy research, said.